Mount Nebo is an elevated rocky outcrop in the Kingdom of Jordan 9km northwest of Madaba and about 26km from the Dead Sea. The mount is famed as the Biblical location where Moses stood looking out at the Promised Land that he was destined never to set foot in. The Bible tells us that after seeing the Promised Land Moses died here on Mt. Nebo. The 1,000m high ridge offers breathtaking views over Jericho, the Dead Sea, the West Bank, the River Jordan and on very clear days even Jerusalem. Mt. Nebo has two peaks Siyagha and al-Mukhayyat; on the summit of Siyagha is the Moses Memorial Church and the remains of a Byzantine monastery and church.

The Biblical Story of Mt. Nebo

Moses led the Israelites out of slavery in Egypt and through the desert for 40 years. In Deuteronomy 34 we read how Moses went up onto Mt. Nebo from the plains of Moab to view the Land of Canaan. God showed him all of the Promised Land but told him it would belong to his descendants and he would see it but never cross over into it. Moses was denied entry into the Promised Land because he had struck a rock with his staff to produce water for the people in the desert instead of trusting in God and simply commanding the rock to give water as instructed. Deuteronomy 34:5 goes on to tell that Moses died and was buried in the land of Moab (present-day Jordan). Although the Bible does not specify the location of Moses’ burial Christian tradition holds that Moses was buried on Mt. Nebo.

From the early days of Christianity, Mt. Nebo became a pilgrimage site. Monks and pilgrims from far and wide came to see where Moses had lived out his final days. 3rd-4th century Egyptian monks constructed a small church on the mount to commemorate Moses’ death. In the 5th century, the church was expanded and in the 6th century, it became a monastery and basilica with beautiful Byzantine mosaics. The site was abandoned in the 16th century and only rediscovered in the 1930s. In 1993 the Franciscan church bought the site, restored, excavated and preserved what remained of the earlier church mosaics. Careful excavation revealed six tombs in the natural rock beneath the church.

What to See at Mt. Nebo

The main attraction and reason for visiting Mt. Nebo is to enjoy the breathtaking view across the Holy Land as Moses did thousands of years ago. The early churches have only survived in part and a modern chapel has been built to protect the remaining mosaic floors from different periods. You can see a large portion of the mosaic measuring 9m by 3m depicting hunting, wine-making, trees and animals. The mosaics are quite magnificent. The original Byzantine baptismal font has also survived.

Visitors to Mt. Nebo today can see the Brazen Serpent Monument – also known as the Serpent Cross it was created by Italian sculptor Giovanni Fantoni incorporating Christ’s cross with the Biblical bronze serpent. The story of the Bronze Serpent (Numbers 21:4-9) tells how the people got frustrated with their journey through the desert and complained to Moses about the lack of bread and water. God sent serpents to bite the people as punishment for their lack of faith. When the people repented God told Moses to set up a bronze snake on a pole. Anyone who had been bitten by a snake could simply look upon the bronze snake and they would be cured. Visitors to Mt. Nebo can also see an olive tree, planted by Pope John Paul II on his visit to the site in 2000. Pope Benedict XVI also visited Mount Nebo in 2009.

If you wish to visit Mount Nebo with a tour from Israel, join one of our 3-4 day Jordan tours. 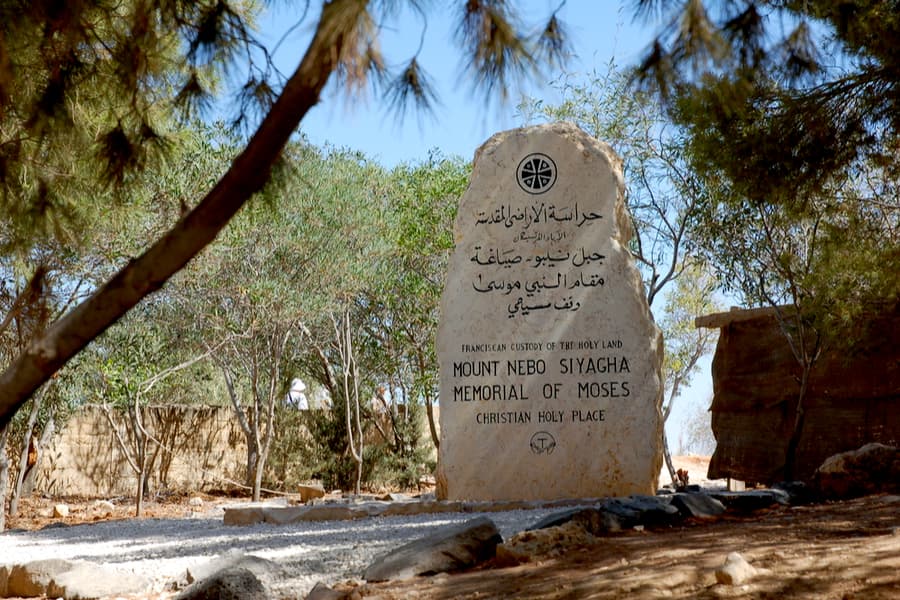