Amman is the capital and largest city of the Kingdom of Jordan, situated in a hilly region between the desert and the Jordan Valley. It is a city of contrasts with ancient roots and a vibrant modern future. It is a multi-cultural, multi-denominational hospitable city where there is a labyrinth of narrow streets with no sidewalk as well as wide avenues and modern business blocks. The downtown area is “Old Amman” or Balad where you can see traditional small businesses, souqs, and street stalls.

This is a must-see for tourists where you can get lost in a maze of streets, see locals working at their traditional trades, eat real Jordanian street food, and relax in a shisha café. The downtown tourist area is known as Abdali (Abdali Boulevard) where there are pedestrian-only streets, eateries, and stores. As you venture away from the center there are residential suburbs where all the houses are, by law, faced with local white stone. West Amman is the more modern, dynamic part of the city while East Amman is older and more residential.

Amman Then and Now

Amman’s history can be traced back to c.6, 500 BC when it was a large Neolithic settlement. During the Iron Age Amman became the capital of the Ammonites who are mentioned in the Bible. At the time the city was enclosed by fortress towers of which you can still see the remains. The Bible tells us how King David took the city despite the defensive towers. In the following years, Amman was ruled by a succession of foreign powers – the Assyrians, Babylonians, Persians, the Ptolemaic Kingdom, Greeks, and Nabataeans.

It was during the Ptolemaic rule that Amman was renamed “Philadelphia’ after the Ptolemaic leader, philadelphus. Amman was eventually absorbed into the Roman Empire as one of the Decapolis League of ten free cities with allegiance to Rome. Under the Romans Amman flourishes and became an important stop on various trade routes.

As part of the Christian Eastern Roman Empire in the Byzantine Era, two churches were built in Amman. By the 7th century, Islam had made its way north from the Arabian Peninsula and spread across present-day Jordan and Amman. It was at this point that the city took its original Semitic name – Ammon or Amman. The city’s prospects dwindled under the Crusades and Mameluks. It remained a small unimportant city during the Ottoman Empire and by 1806 was reported to be inhabited only by Bedouin.

When the Ottoman Empire left the region the city slowly began to grow and prosper. When the Hejaz Railway was constructing in 1905 linking Damascus, Amman, and Medina the city’s population swelled. In 1923 the Emirate of Transjordan was established and in 1946 became an independent kingdom with Amman as its capital.

Things to See and Do in Amman

Amman offers all the distractions of a modern city including water parks, theatres, spas, traditional bathhouses, cinemas, concerts, sports, golf, and on the outskirts of the city there is the King Hussein National Park. After dark, visitors to Amman can enjoy clubs playing traditional Arabic music, modern music, or featuring cultural performances. For shopaholics, there is the cobbled Rainbow Street for local goods, restaurants, antiques, and sheesha cafes. The pedestrian-only Wakalat Street has international brand-name stores.

Towering above the city is the Citadel on Jabal Al-Qala’a, site of biblical Rabbath-Amman. The excavated site shows the remains from the Roman, Byzantine, and Islamic eras. The most impressive ruins are those of an Islamic Umayyad Era palace. On the Citadel is the National Archeological Museum displaying a collection of antiquities. Not far is the Ummayad Palace. Nearby are the excavated ruins of a Byzantine church and a Roman temple, the Great Temple of Amman. One of the most impressive structures in the city is the Ottoman-style King Hussein Bin Talal Mosque or Al-Husseini Mosque built in 1924.

Don’t leave Amman without visiting the markets especially the Gold Souq; the Roman amphitheater and Nymphaeum; the Jordan Museum; the Folklore Museum; the Ammonite-Era watchtower; the sites of the Citadel; the Byzantine-era church; the Jordan National Gallery of Fine Arts and Ummayad Palace. To see what lies in Amman’s future visit ‘View Amman’ where there is a permanent exhibition dedicated to the city’s architecture and development as well as a large model of the city.

If you wish to visit Amman with a tour from Israel, join one of our 3-4 day Jordan tours. 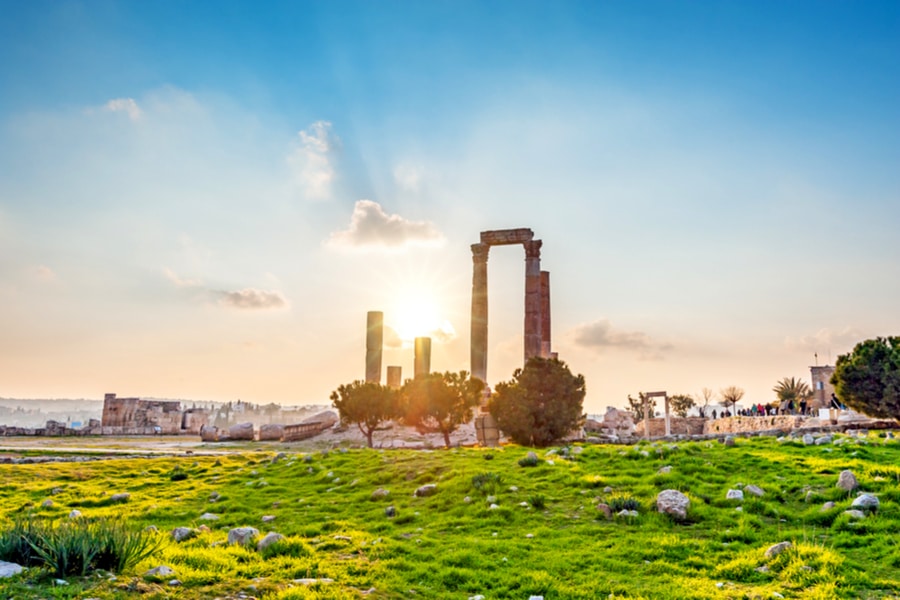