Neve Tzedek (“oasis of justice” in Hebrew) is not only one of Tel Aviv’s oldest neighborhoods it is also thought to be one of the most beautiful. Neve Tzedek is located south east of Carmel Market and was established in 1887 as the first Jewish neighborhood built outside of the walls of Jaffa. A group of families decided to leave the confines of Jaffa where conditions were crowded and set up their own community which soon grew as other Jewish families joined them. They built the neighborhood with low-rise buildings along narrow streets incorporating elements of the art nouveau and later Bauhaus architecture. By 1909 the neighborhood had expanded to such an extent that Tel Aviv was born. Over the years as new developments were built people moved away from Neve Tzedek and the area became run down. Only since the 60s the municipality has invested in restoration and preservation of the historic buildings. The area has been restored to its former glory and attracted chic boutiques, trendy cafes and art galleries. The cobbled streets and historic buildings have gained a new lease on life and have been completely gentrified. The window boxes drip with brightly colored flowers, trees bring greenery into the streets and the architecture alone is breathtaking. Each house features some unique element of Bauhaus or Art Nouveau (Jugendstil) architecture. 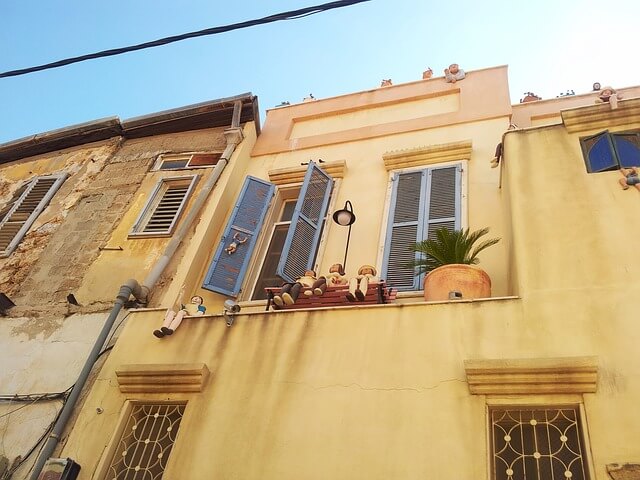 Neve Tzedek is famed for its exquisite architecture, cultural legacy and village-within-a-city feel. The neighborhood lives up to its name, being a peaceful oasis in the busy metropolis. The neighborhood is perfect for exploring on foot and you can often see groups taking walking tours through Neve Tzedek.
In the first half of the 1900s the neighborhood was home to writers and artists including Brenner; Nobel Prize winner Agnon and artist Nachum Gutman. Today artists, writers, public figures and performers are still attracted to the neighborhood. Actress Gal Gadot (Wonder Woman and Batman V Superman) has a home here.

See and Do in Neve Tzedek

Although you will enjoy just wandering the streets of Neve Tzedek there are several highlights. The Rokach House at 36 Simon Rokach Street was one of the first houses built in the neighborhood by Shimon Rokach whose son Israel Rokach went on to be Tel Aviv’s second mayor. The Suzzanne Dallal Center on Yahieli Street is the city’s official dance center and the site of a tree-shaded piazza where there is a cafe. The dance center is housed in a former school building constructed in 1908 in the Bauhaus style. Chlouche House at 32 Shlush Street was the first house built in Neve Tzedek in 1886 by Aharon Chlouche today it is an art gallery. Visitors can go up to the roof top terrace for brilliant views. The Nachum Gutman Museum is located in the artist’s former home in Neve Tzedek and Samy D is a ceramic studio worth visiting. For designer stores, boutiques and art galleries wander down Shabazi Street. Shabazi is the neighborhood’s main street but be sure to explore the smaller lanes which branch off.
Once you have had your full of architecture, culture and shopping relax in one of the many Neve Tzedek restaurants or cafes. The eateries have the most beautiful settings in tranquil courtyards, historical buildings or with sidewalk seating.