The Best Way to Explore Galilee from Jerusalem

Travelers to Israel who base themselves in Jerusalem will want to see the country. Although Israel is small it is still over 150km-200km from Jerusalem, depending on where in the Galilee you want to visit. This journey can take about 2.5-3 hours. If you have booked an Israel package tour covering the country then you will have a way of getting to the various destinations across Israel. If traveling independently you will have to figure out the best way to see the Galilee from Jerusalem. Here are a few suggestions to help you plan your Galilee excursion from Jerusalem. 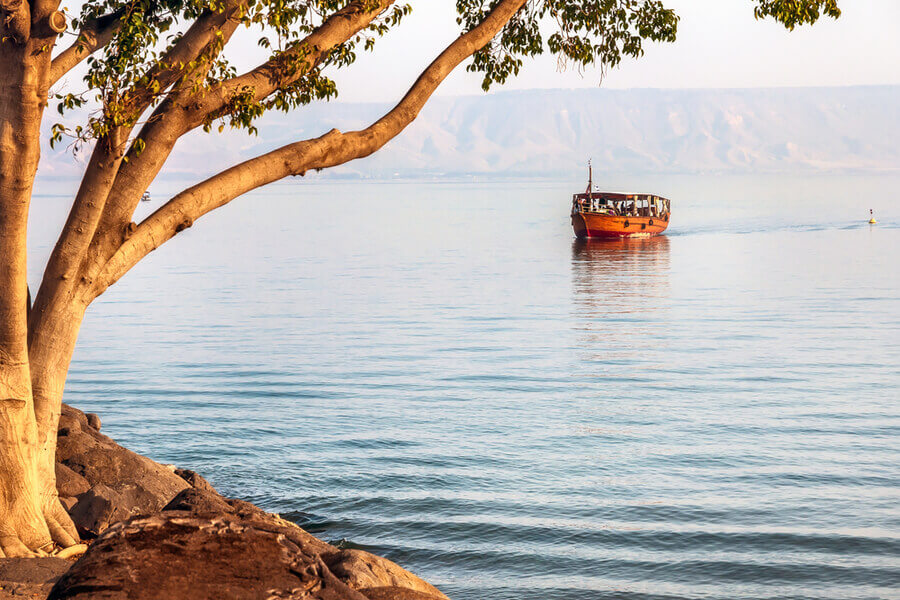 Use Public Transport to Go from Jerusalem to the Galilee

The distance from Jerusalem to Galilee is approximately 150 km depending on the route you take. You can get a bus from Jerusalem's central bus station to Tiberias, on the edge of the Sea of Galilee. The journey takes about 2-3 hours. Tiberias is a good place to base yourself and from there you can either hike around the Sea of Galilee or take further buses to the various locations. If you plan to make it a day trip then this could be problematic.

You will spend much of your time waiting for buses and traveling on buses. You will have to leave very early in the morning if you plan 3 hours there and 3 hours back by bus. It doesn’t leave you much time on a day trip from Jerusalem to Galilee. Alternatively, you could make it a longer trip and stay overnight. It is advisable to research the places you want to visit and figure out how you will get public transport from place to place in Galilee before you actually leave Jerusalem. 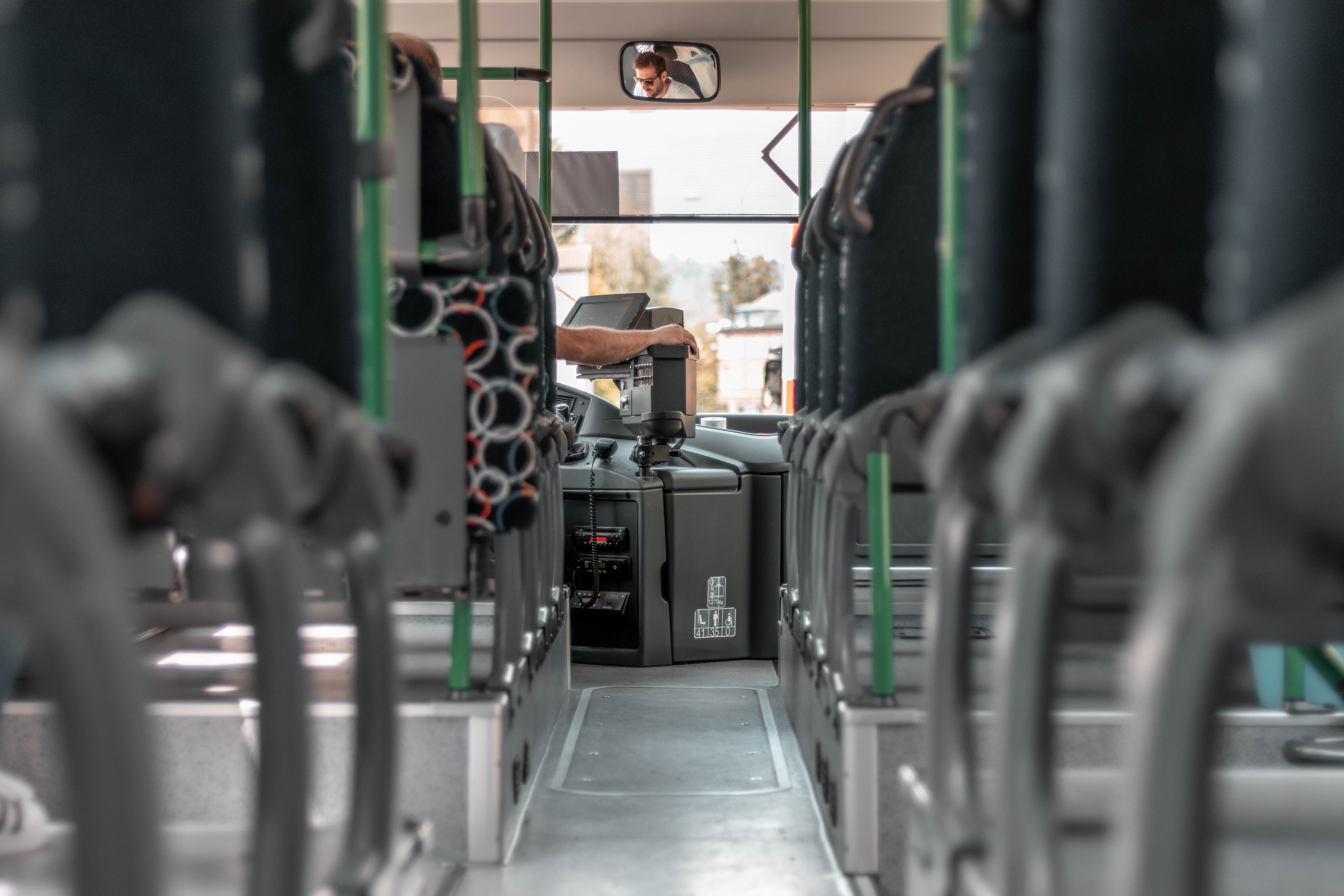 Traveling by bus. Photo by Christian Wiediger on Unsplash

In addition to package tours that cover several days, several destinations, and accommodation there are also day tours from Jerusalem to Galilee. If you prefer not to travel on a package tour then day tours to difficult-to-reach or distant locations are the perfect solution. You could join a group day tour from Jerusalem to Galilee or even take a private tour and tailor-make your itinerary.

Tours from Jerusalem to Galilee include pick-up and drop-off at your hotel or a convenient location in Jerusalem. The tour then takes you north in air-conditioned transportation and stops at several of Galilee’s famous locations. The tours usually have a theme, for example, Christian landmarks around the Sea of Galilee; Galilee and Golan tours, or Jewish sites in Northern Israel. There are also Galilee tours from Jerusalem that include places like Caesarea, Safed, Haifa, Nazareth, Acre, or Rosh Hanikra. 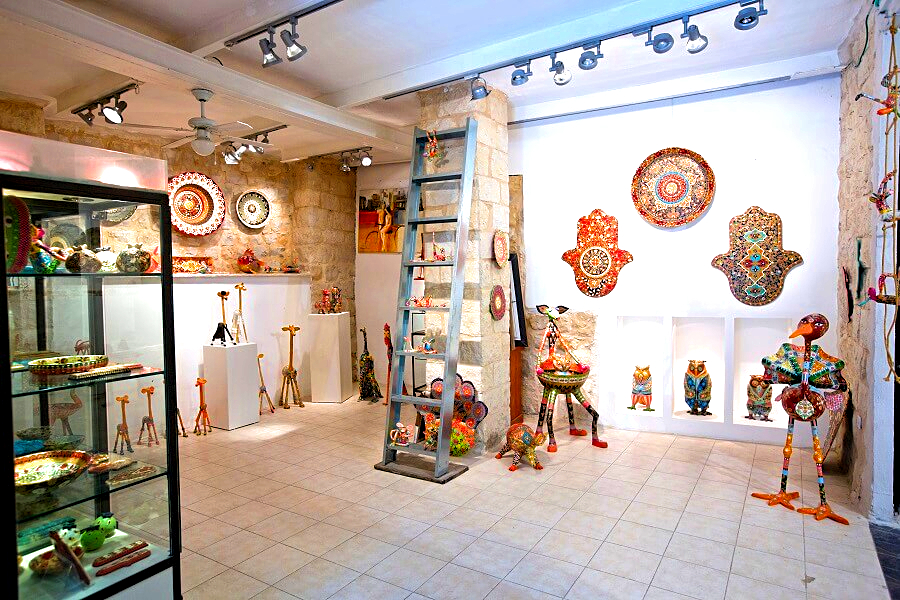 Rent a Car to Travel from Jerusalem to Galilee

Having your own car can be a very convenient way of traveling but it suits only a certain type of traveler. You’ll have to negotiate unknown roads; cope with Israeli drivers and find parking once you reach the larger cities like Tiberias, Nazareth, Acre, and Safed. The advantage is that you can pick and choose where to stop and what to see.

The disadvantage can be the price and the fact that you will have your attention on the road instead of being able to sit back and enjoy the journey. Without a guide, you will have to know which places to visit and how to get there. Car rental is readily available in Israel but be sure you have included all the extras and taken into account all the restrictions.

Check what time you can return the car as you will be traveling quite a distance and may not be back in Jerusalem until late. Some car rental companies in Israel close at 5 pm and there are different hours on Shabbat and national holidays. 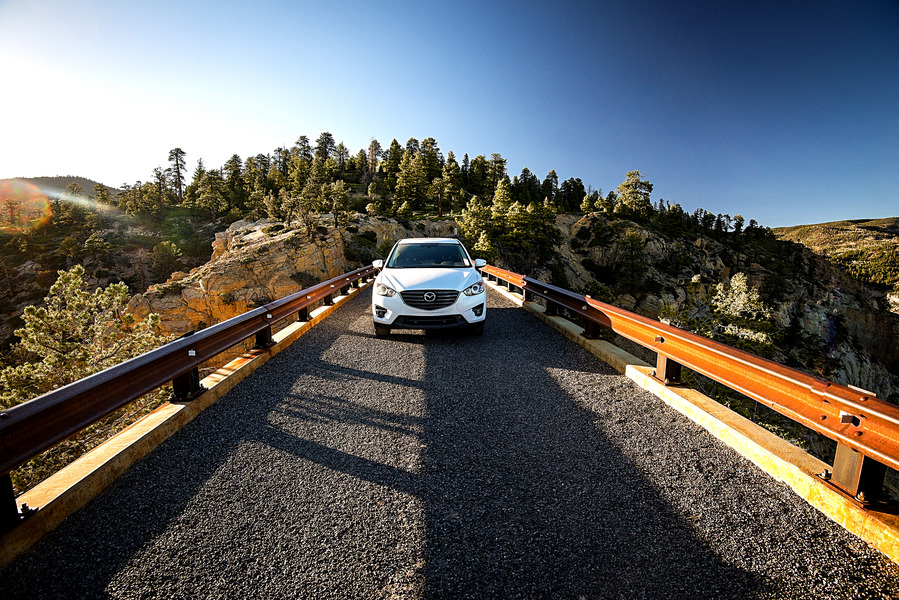 Traveling with a rented car. Photo by Scott Osborn on Unsplash

There are a plethora of Christian sites in Galilee where Jesus grew up and where he spent his ministry traveling from village to village preaching the word of God. The Christian sites of Galilee should not be missed! They have great biblical significance and are surrounded by Galilee's stunning scenery. A good way to plan a trip to the Galilee that covers all Christian sites is to spend at least two days in the region.

If your time is limited then spend a day touring just the Christian highlights along the shores of the Sea of Galilee (Kinneret in Hebrew). Your trip to Galilee will probably start with a drive up Israel's Mediterranean coast past attractions like Caesarea and Haifa. Turning inland you'll travel through the Valley of Armageddon (Megiddo), where the prophesized Final Battle is predicted to take place during the End of Times. From here you have a view of Mount Tabor, the site of the Transfiguration.

Traveling over rolling green hills and past lush farmlands you'll look down on the Sea of Galilee nestled in an idyllic valley. Starting at the southern end of the sea move up the western shore past the city of Tiberias. The Sea of Galilee is where Jesus walked on water (John 6:19-21) and where he calmed the storm (Matthew 8:23-26). 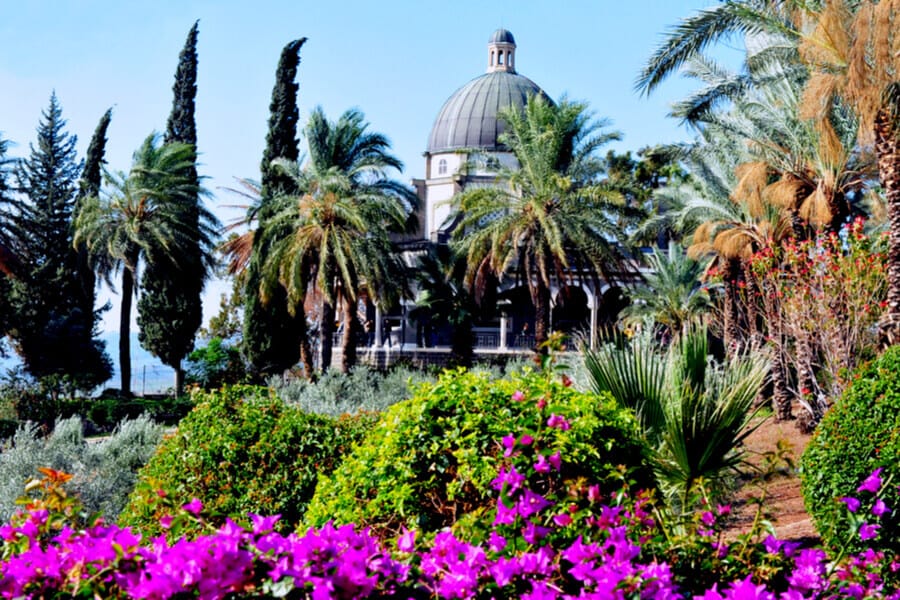 The Most Famous Christian Sites in Galilee

Stop in Magdala, once a small fishing village and home to Mary Magdalene. Travel a little further along the shore to Ginosar, a modern-day kibbutz in the shadow of Mount Arbel. The kibbutz is home to the Yigal Allon Museum which holds the Jesus Boat. During the 1986 drought, the Sea of Galilee's water level dropped dramatically revealing the remains of this 1st-century fishing boat buried in the bed of the lake. The fishing boat would have been the same kind of fishing vessel used by the disciples. The Bible tells us how Jesus crosses the water, landing in Ginosar where the people touched the fringe of His cloak and were cured of their ills.

Nearby is the Church of the Primacy of St. Peter; the traditional site of Christ's 4th appearance after his resurrection (John 21:1-24) and where he conferred primacy on Simon Peter giving him leadership over the church. Another incredible Christian site on the shore of the Sea of Galilee is the Mt. of Beatitudes crowned by a unique church, designed by Antonio Barluzzi in the 1930s to mark the place where Jesus gave the Sermon on the Mount. 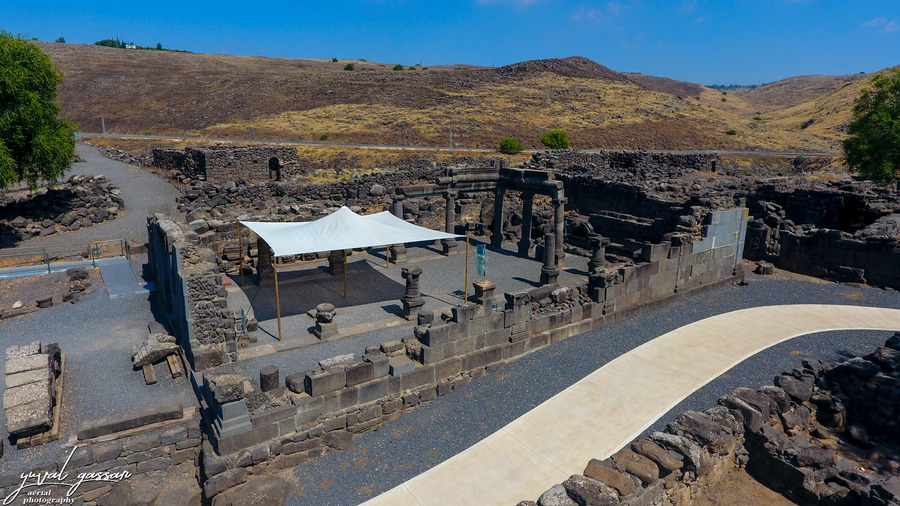 Also visit Capernaum, once the hometown of Peter, Andrew, John, and James. Here Jesus based himself during his ministry; exorcised demons and healed the slave of a Roman centurion. The main Christian sites in Capernaum today are the excavated Byzantine village; the remains of a 1st-century synagogue and an octagonal church built around the remains of what is believed to have been Saint Peter's home.

If you'd like to venture to the eastern shore of the Sea of Galilee, at the foot of the Golan Heights you can stop at Kursi, the site of the miracle of the swine (Luke 8:26-39). Here you can see the ruins of a large Byzantine monastery and church and see the remains of a 5th-century church mosaic floor. If you are with a tour you will probably also venture up into the Golan Heights to visit places like the Shalom Observatory; former Syrian fortifications and Katzrin where there is an excavated and reconstructed Talmudic-era (4th-8th century) village.

At the southernmost point of the sea where the River Jordan flows out of the Kinneret is the baptismal site Yardenit. Tours stop at Yardenit where it is possible to be baptized in the Jordan as Jesus was. Also visit Kfar Cana, famed as the site where Jesus attended a wedding and changed water into wine. The 19th century Wedding Church commemorates this miracle and encompasses the remains of Byzantine mosaics from an earlier 5th-6th-century church. The church holds two ancient stone jars similar to those used to hold wine during the biblical era.

The easiest way to see these Christian sites is to take a one or two-day tour like the Sea of Galilee, Cana, Magdala & Mt. of Beatitudes Tour. 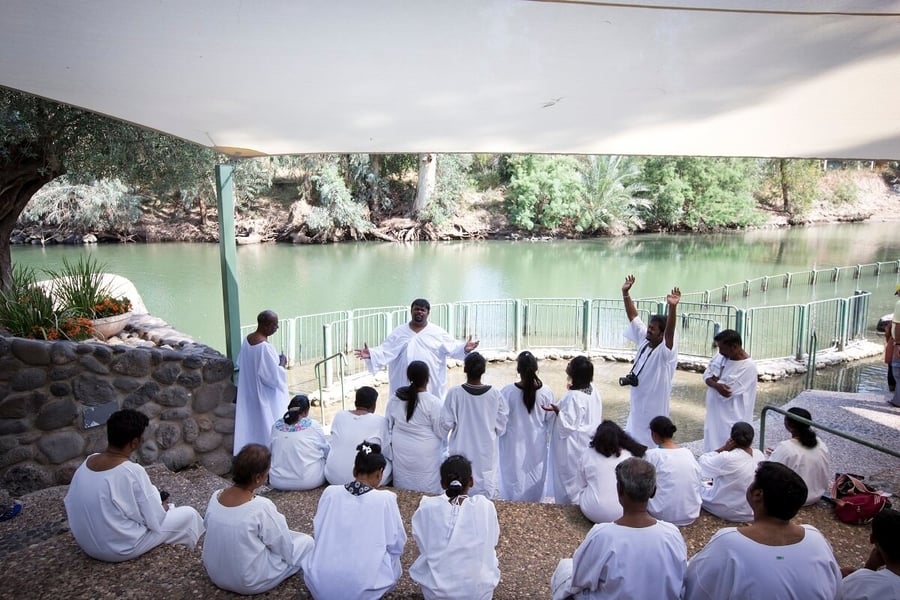