Caesarea is an affluent modern city along the northern Mediterranean coast of Israel between Tel Aviv and Haifa. It is also the site of extensive archaeological remains. Along the seafront are the remains of the Roman port city of Caesarea Maritima and subsequent Byzantine, Muslim and Crusader structures. 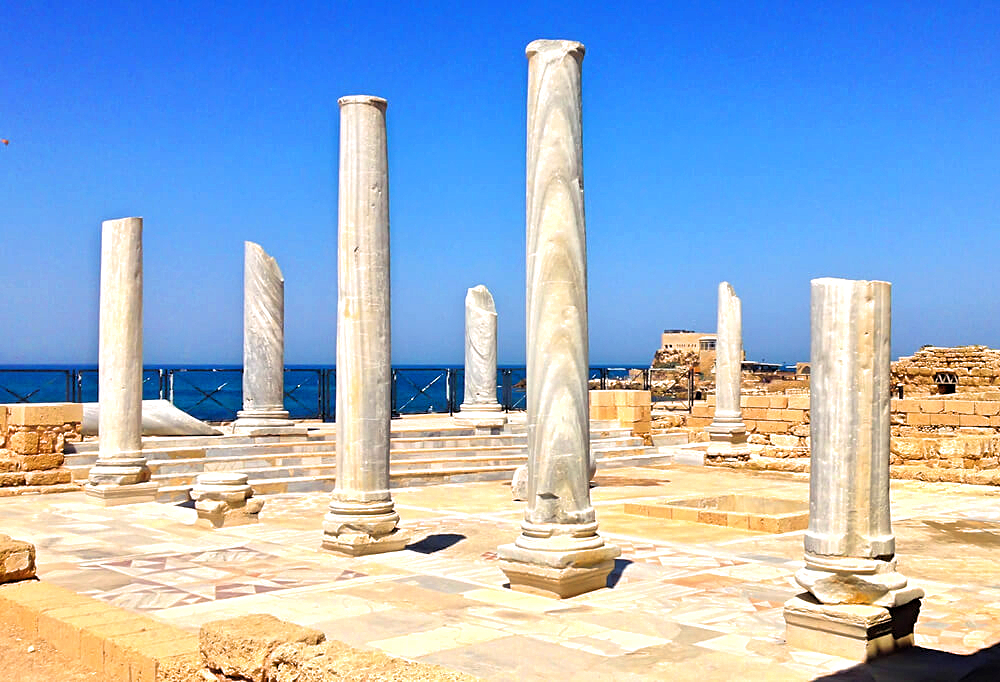 A Brief History of Caesarea

In the 4th century BC, the Persians (Phoenicians) established a trading station and small settlement where Caesarea stands today; they called their town Straton's Tower. In 90BC the town was annexed to the Hasmonean Kingdom and in 31BC the Romans won Strattons Tower in battle.

Caesar then gifted the town and shoreline to Herod. In 25-13BC the Rome-appointed King of Judea, Herod the Great commissioned the construction of a large port. The port city of Caesarea Maritima became the administrative center of the Judaea Province. The Romans built a complex aqueduct system bringing fresh water to the city from an inland spring. Following the Byzantine era, the Muslims conquered the city in the 7th century AD.

From 1101 to 1187 and 1191 to 1265 the Crusaders ruled the city. With funding from French King Louis IX, they built a large fortress and a smaller port on the remains of the Roman port. The Mamluks took the city from the Crusaders in 1291. Fearing the return of the Crusaders the Mamluks practiced a “scorched earth” strategy burning and destroying the coastal cities and ports. The city lay in ruins for many years after that.

In 1884 a small group of immigrants from Bosnia settled in Caesarea and established a fishing village and in 1940 the Jewish Kibbutz Sdot Yam was founded alongside the village. In 1952 the present Jewish community established the town we know today as the city of Caesarea. The city is known for the world-class golf course; the Roman theater which hosts top performers, the annual Caesarea Jazz Festival, a beautiful beach, and the Caesarea National Park that protects the archaeological sites. 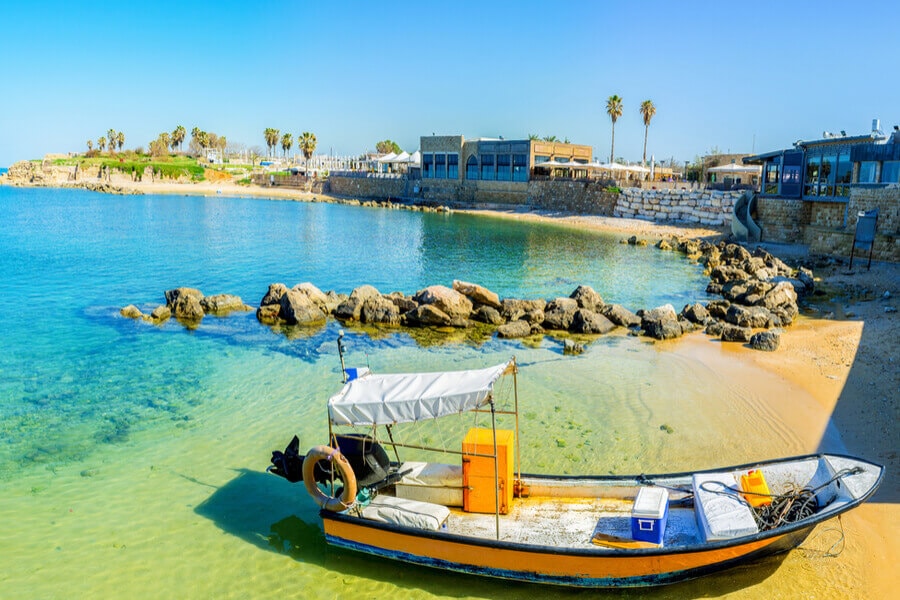 Roman Theatre - The main attraction of Caesarea is the Caesarea National Park. The ancient Roman history of this site is recorded by Roman historian Josephus Flavius. On the edge of the national park is the massive Roman Theater. This classic Roman structure is perfectly preserved.

It has the typical semi-circular shape with seating on staggered stone steps facing the stage and the sea beyond. In Roman times the theatre would have been important in entertaining the many foreigners and sailors who came into port. The theatre was originally built under Emperor Vespasian and later expanded by King Herod.

Herod’s Reef Palace - Several pillars remain from the inner courtyard of King Herod’s Reef Palace. The opulent palace would have had two stories and was partly built on the marine reef jutting out onto the sea. Today parts of the palace can still be seen and parts are submerged beneath the sea. Experts differ in opinion as to whether this was Herod’s palace or a later construction. We can also see the remains of a swimming pool alongside a floor mosaic and ritual bath. 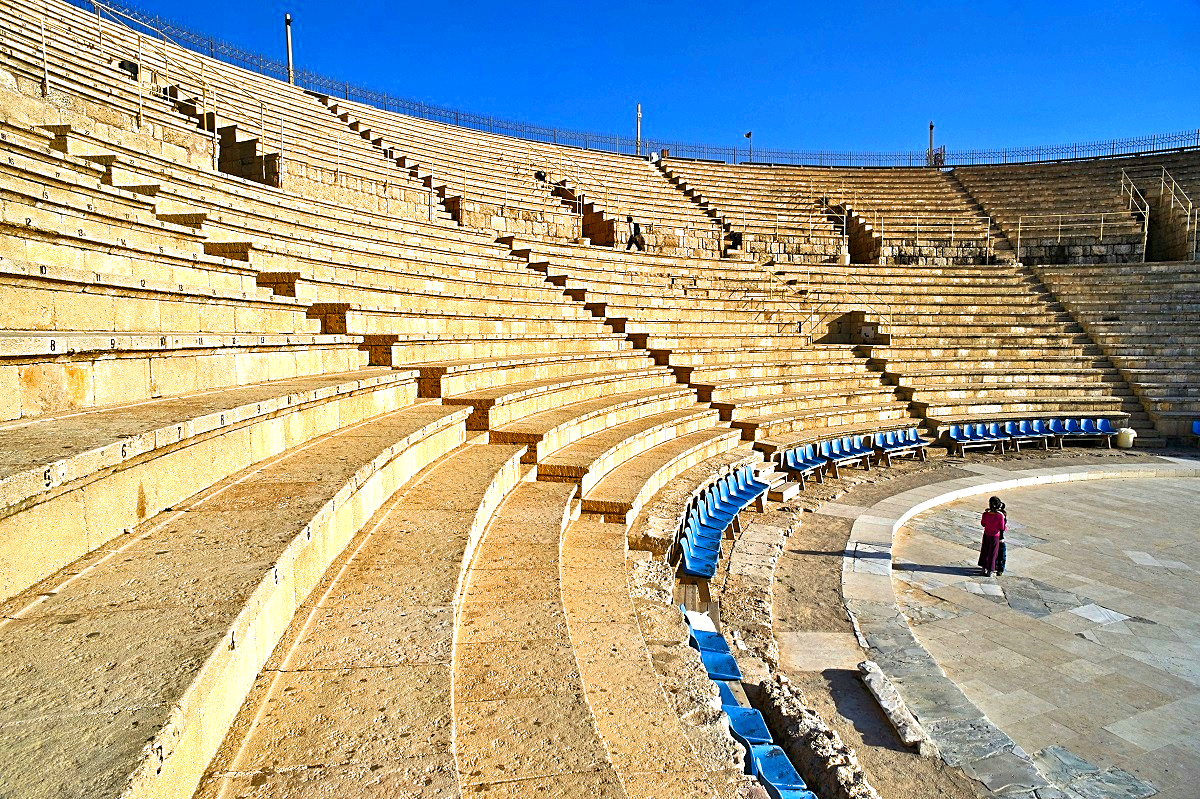 Hippodrome - Among the archaeological remains there is a large hippodrome with reconstructed frescoes. Here the Romans would hold horse and chariot races. Another surviving piece of the ancient structure is the public toilets – a row of stone seats with holes in them. Throughout the park, there are large Roman columns, capitals, sculptures, gravestones, and carved architectural features attesting to the importance and opulence of this former Roman city.

Also at the site, we can see where the bathhouse, temples, storerooms, and homes once stood. Of particular interest among the many archaeological findings was an inscription naming Pontius Pilate. This was the first recorded mention of Pilate’s name dated within Jesus' lifetime.

Structures remaining from the Byzantine era include a villa with floor mosaics and the ruins of a Byzantine church. Remains dating back to the Crusader era include the reconstructed Crusader Gate; a large moat that encircled the Crusader fortress, a high defensive wall, and arched entranceways. 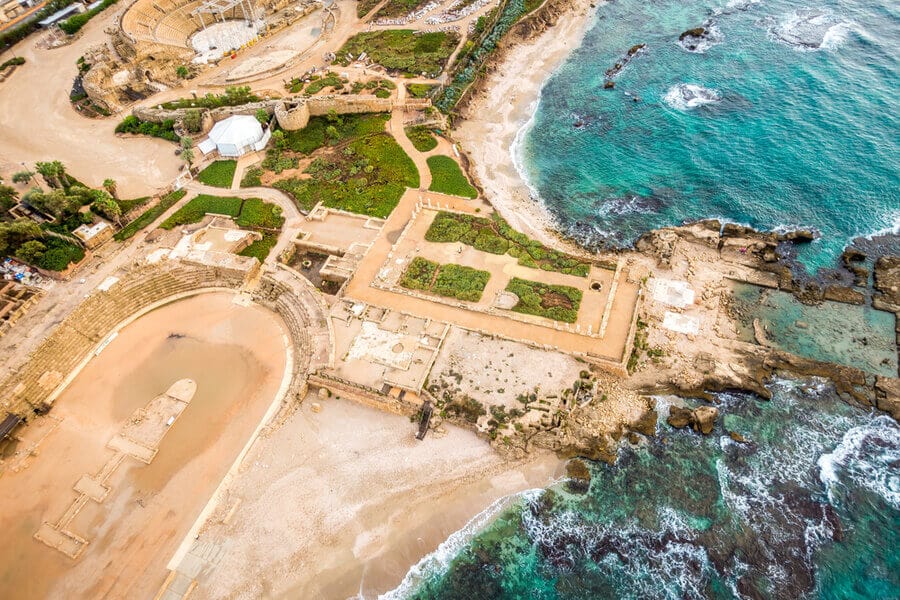 Up until the construction of Herod’s port at Caesarea, only natural bays were used to land on the Mediterranean shore of the Holy Land. Herod’s port was the first quay-based port along this stretch of coast. It was one of the largest and most sophisticated ports at the time. The port consisted of submerged quays on wooden rafts; a lighthouse and a breakwater stone wall.

Vessels came and went from Caesarea port to cities across the Mediterranean Sea. The port provided services necessary to the visiting vessels including ship repair and supplies. All this did not come without a price and the ships were taxed by the Romans making the city even richer. The downfall of Herod’s port was a lack of engineering know-how. Over the course of several years, the quays collapsed and by the Byzantine era, the port no longer functioned.

Caesarea Stars brings to life prominent figures from Caesarea’s history so that visitors can “meet” them and hear their stories. This attraction includes a 3D view of Caesarea showing the physical changes it has undergone over the centuries. Time Tower is a computerized animated presentation in the Crusader Tower. Scenes from Caesarea’s history are shown with a focus on how the Roman port city was constructed. 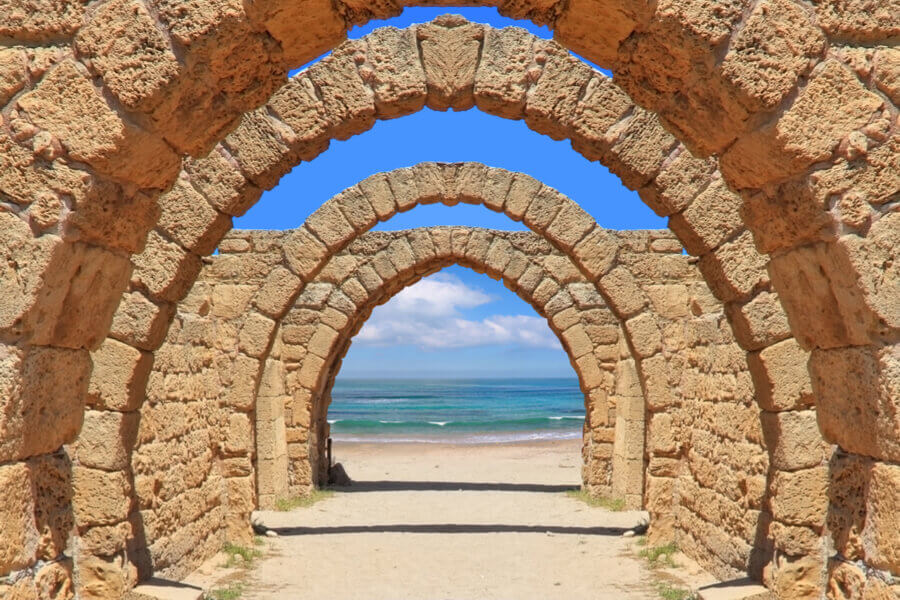 Today the port area is a lively entertainment area where the ancient structures are home to galleries, cafes, stores, and restaurants. Many activities take place in Caesarea. During Passover the hippodrome hosts “Horses in the Hippodrome” where horses and their riders perform in Roman costume.

The Festival of Ancient Times is held during the Succoth holiday (usually in September). This is a theatrical festival with shows that present stories of ancient times. Visitors can take Caesarea tours and in the summer there are even candlelight tours at night. The Roman theater hosts the biggest Israeli and international stars.

Divers visiting Caesarea are treated to an underwater archaeological park. They can dive among the remains of Herod’s port in an “Underwater Museum.” Visitors enjoying the beach at Caesarea will be just meters from the ancient Roman aqueduct that runs the length of the beach. 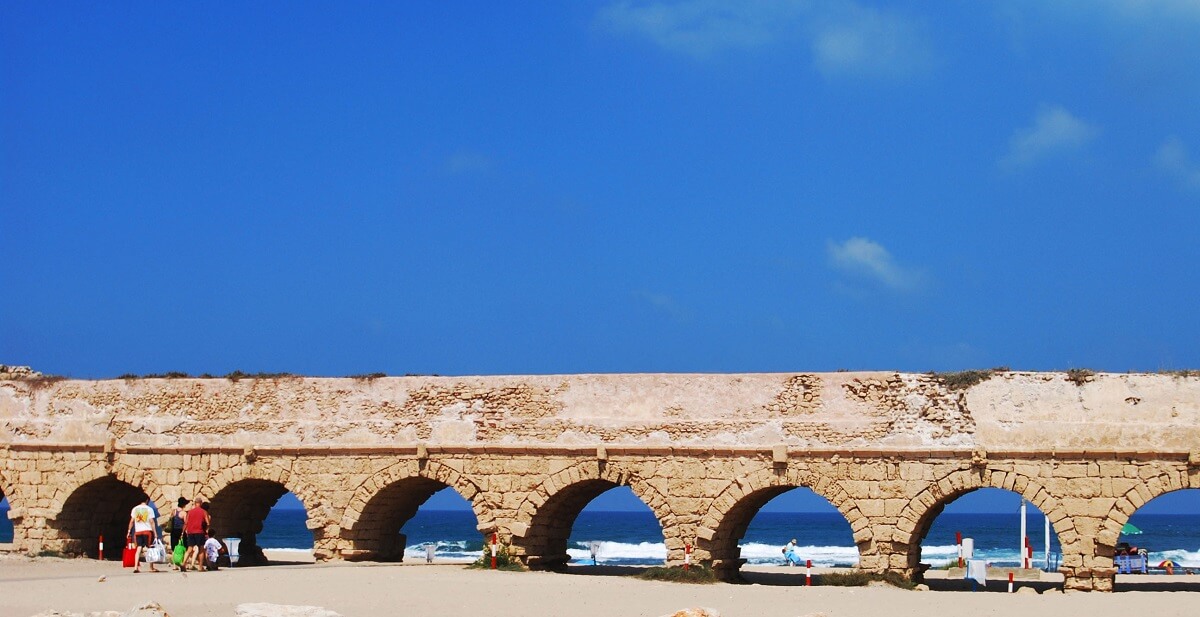