When people refer to Old Jaffa they are talking about the restored ancient city perched on a cliff at the southern end of Tel Aviv’s beachfront promenade. Jaffa Port lies directly below Old Jaffa; an historic gateway to the Holy Land which has also been significantly restored. Both these two Tel Aviv-Jaffa attractions offer endless things to see and do. For the last 6,000 years Jaffa Port has welcomed travelers, immigrants and armies. The city is associated with the legends of Andromeda and the Biblical figures of Jonah and St. Peter. The city has been ruled by Egyptians, Philistines, Alexander the Great, Romans, Napoleon, Muslims, Crusaders  and the Ottomans. Each has left its mark on the city. Today Jaffa is home to a mixed population of Christians, Jews and Muslims. 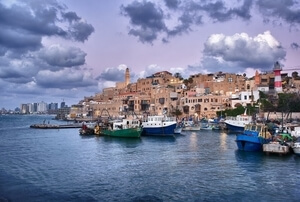 It is possible to walk from Tel Aviv’s beachfront promenade all the way to Jaffa Port. At the southernmost point of Tel Aviv is the Charles Clore Park. From here the Sea Wall Promenade leads you all the way to the old port. Jaffa Port has Old Jaffa as a backdrop; built on the cliffs overlooking the water. Today the port no longer welcomes pilgrims and travelers by water but it is a port for fishermen and sail boats. You can walk along the edge of the  water and imagine Jonah setting sail for Tarshish; Jaffa oranges being shipped from here across the globe or the first Jewish immigrants arriving in Palestine. As you walk out on the pier look back at Jaffa and see the red and white striped lighthouse. You can also look up towards St Peter’s bell tower.
The buildings and former warehouses on the waterside have been renovated and repurposed to hold restaurants, bars and shops. One of the most fascinating sites at Jaffa Port is the Nalaga’at Center, a not-for-profit center for the deaf-blind community. At Nalaga’at (Please Touch) there is a theatre company comprised of sensory-impaired actors and a restaurant where you eat in the dark and are served by visually impaired waiters. The Jaffa Port Market is a new gourmet food market housed in a repurposed hanger together with shops, restaurants and galleries. On Fridays from May to October there are special outdoor events held for the public including live musical performances, workshops for kids, arts and crafts stalls and even dance classes. 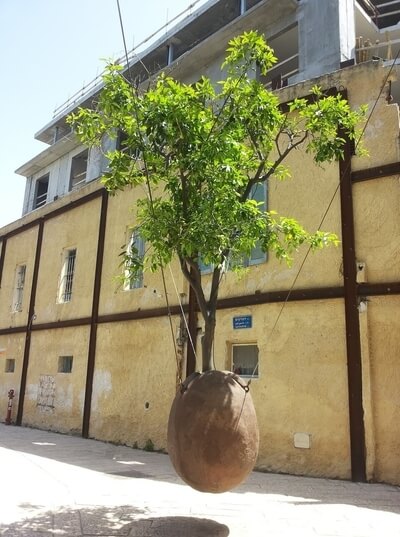 Old Jaffa is built from pristine cream-colored stone similar  to the Old City of Jerusalem. The windows of Jaffa homes are painted bright blue and window boxes overflow with colorful blooms. Visitors can discover trendy restaurants, picturesque alleyways, historic churches, archaeological remains and a    unique artists’ colony.
When you arrive in Old Jaffa’s central Kdumim Square you will see a magnificent fountain    with stone characters representing the zodiac signs. Each of the alleyways in Old Jaffa  leading down to the port are named after a zodiac sign. On Kdumim Square you will  find the Old Jaffa Visitors Center. Here there is the “Images of Jaffa” , a multi-sensory experience which introduces visitors to the history of Jaffa. The center also holds archaeological remains from Jaffa’s ancient past.  In the restaurants  that flank the square you can find delicious culinary delights from Middle Eastern cuisine and seafood to Yemenite and French food. Some of the restaurants offer brilliant views across the sea all the way to Tel Aviv’s beachfront.
From Old Jaffa you can look out to sea and spot Andromeda’s Rock. This group of rocks jutting out of the water is associated with the Greek legend of Perseus and Andromeda. Andromeda had been chained to the rocks as a sacrifice to the sea monster Cetus when Perseus rescued her. Attractions in Old Jaffa include the Home of Simon the Tanner where St. Peter is said to have spent the night. While here he had a dream which was interpreted as a message from God telling Peter that non-Jews should be welcomed into Christianity. Jaffa is the site of Ramses Gate which has survived 4,000 years since Egyptians ruled Jaffa. The intricately carved gate was once part of a grand Egyptian palace. Make a wish on the Wishing Bridge as you enter Park HaPisga. In the park there are several works of art and canons left here by Napoleon in 1799. Visit St Peter’s Church built in 1654 and dedicated to the saint who visited Old Jaffa.
The narrow stone alleyways of Old Jaffa are lined with over 50 galleries, design stores and art studios. Among the most well known galleries there is Adina Plastelina, the Ilana Goor Museum and a gallery of Ethiopian art. Artists live and work here, displaying and selling their creations to the public. The Antiquities Museum of Tel Aviv-Jaffa is housed in an Ottoman-era building. Here you can see archaeological remains excavated in Jaffa. When the sun goes down Old Jaffa comes alive with restaurants and cafes. People come to Old Jaffa at night to enjoy the cool sea breeze, beautiful surroundings and the view across the sea to Tel Aviv’s glittering lights.