Things to Do at the Sea of Galilee

Visitors to Israel tend to make a beeline to Tel Aviv and Jerusalem but many miss out on one of the country’s most beautiful attractions – the Sea of Galilee (the Kinneret in Hebrew). To get a sense of the diverse natural wonders of Israel you really should make a trip north to Galilee.

Paddleboarding on the Sea of Galilee. Photo by Erez Gavish on Unsplash

The Sea of Galilee covers about 102km², 28km from north to south and 10km from east to west. If you want to drive, walk or cycle around the lake it has a circumference of 53km. It is called Kinneret from the Hebrew word for violin or lyre because the lake’s shape resembles a violin.

This is also where Jesus spent his ministry preaching in nearby villages and it was here that Jesus walked on water and performed several other miracles. The Kinneret is the country’s reservoir for fresh water and as the water level rises and falls depending on the rainfall so the country watches in anticipation to see if there will be a water shortage each summer. There are a lot of things to do at the Sea of Galilee:

1. The Holy City of Tiberias

The largest city on the shore of the Kinneret is Tiberias; the Jewish Talmud was written in Tiberias. Visit the holy city of Tiberias and take a relaxing walk along the Tiberias Promenade. There is a small flea market near the water’s edge and you can enjoy a fish dinner overlooking the water.

At the southern end of the Tiberias Promenade, there is a nightly sound and light show which lasts 15 minutes and is performed at 8:30 pm and 9 pm or 10 pm. The multimedia show is free and projected onto two large water screens. The scenes created on the screens highlight the history of the region and are accompanied by classical music and dancing fountains.

Rocky Shore of the Sea of Galilee. Photo by Chris Gallimore on Unsplash

Yardenit is a point at the southern tip of the Kinneret where the lake meets the Jordan River. It was here that Christ was baptized by John the Baptist. Today it is possible for visitors to get baptized in the same waters. At the Yardenit Visitor Center, you can get a white robe, be baptized, and receive a certificate attesting to your baptism. There is an alternate baptismal site further south at Qasr al-Yahud.

The Mount of Beatitudes (Har HaOsher in Hebrew) overlooks the Sea of Galilee and was the site of the Sermon on the Mount. Today a beautiful church crowns the mount; the octagonal church represents the eight beatitudes (Matthew 5:3-11) and was built in 1938.

4. The Biblical Village of Tabgha

In Tabgha, literally on the water’s edge is the Church of the Multiplication of Loaves and Fishes where Jesus fed 5,000 people with five loaves and two fish. The original church was constructed in the 5th century and has since been restored. The original floor mosaic has survived. Also in Tabgha is the Church of St. Peter’s Primacy where Jesus appeared to his disciples after his resurrection. 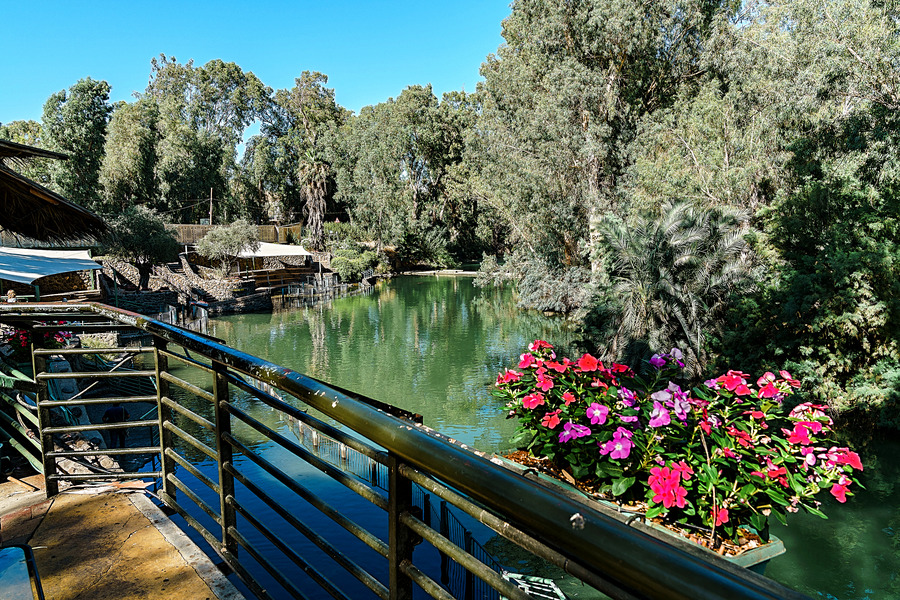 5. Capernaum - The Town of Jesus

You can visit Capernaum, on the northwestern shore of the Sea of Galilee. This biblical town has several ancient churches and synagogues including the church of St. Peter’s House. A modern octagonal church surrounds the remains of St. Peter’s house which can be seen through the glass floor.

6. The Jesus Boat at Kibbutz Ginosar

The Jesus Boat is a 2000-year-old fishing boat that was uncovered on the bed of the lake during a drought in the 1980s. It is now on display in the Jesus Boat Museum (Yigal Allon Center) on Kibbutz Ginosar on the western side of the Sea of Galilee. Other parts of the museum display art by local Arab and Jewish artists of the Galilee and showcase art that depicts the culture, history, and nature of the area.

On the east shore of the Sea of Galilee is Kibbutz Ein Gev where there are activities for the whole family, a beach, accommodation, and restaurants. There is also an anchor museum and an art gallery. You can take a 30-minute tour of the kibbutz on a mini-train and learn about the establishment of the kibbutz in 1937 and the everyday life of the kibbutz. 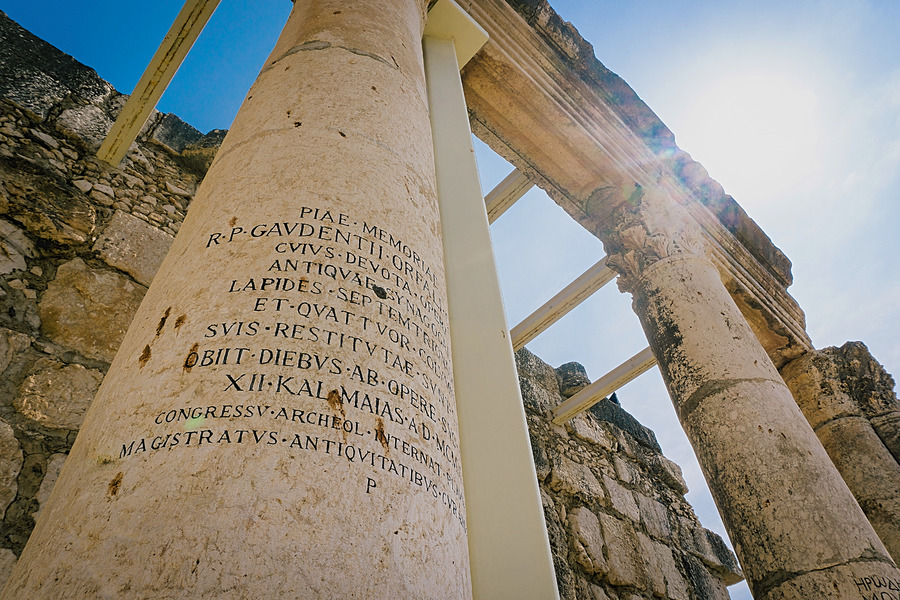 A column with Inscription, Capernaum, Israel. Photo by Phil Goodwin on Unsplash

8. Camping and Water Sports at the Sea of Galilee

There are several beaches on the shores of the lake as well as campgrounds where you can set up your tent just a few meters from the water. Camping around the Sea of Galilee is a must for all nature lovers. You can try a number of different water sports on the Kinneret including water skiing, kayaking, kite surfing, windsurfing, canoeing, and sailing. The top beaches around the Sea of Galilee are Tzemach Beach in the south and Ein Gev Beach on the east coast. At Gai Beach, Luna Gal, and Tzemach there are water parks.

9. Hot Springs near the Sea of Galilee

Visit the hot springs of Tiberias where there are ancient Turkish baths fed by natural springs. The thermal mineral pools are both inside and outdoors and there are heated swimming pools, hot tubs, and spa treatments. Not far from the Sea of Galilee is Hamat Gader Hot Springs another thermo-mineral spring complex on the same site that the Romans built their baths 2,000 years ago.

10. Cruise Ships on the Sea of Galilee

There are tourist cruise ships that make short excursions from Tiberias. There are large boats that can carry up to 165 passengers to all ports around the lake. These boats resemble the fishing vessels used in Galilee in the times of Jesus. Cruises to Christian sites around the Sea of Galilee are also possible.

Boat cruise on the Sea of Galilee. Photo credit: © Shutterstock

While You’re in the Area….

Just a little further afield into the Golan Heights, south to the Jordan Valley, and into the Bethsaida Valley there are more wonders to discover like the lush forests and vegetation around the River Jordan. One of the areas nearby is so beautiful it is believed to have been the Garden of Eden.

The Galilee is crisscrossed with hike and cycle trails all clearly marked. Other nearby things to see and do are at the Jordan Park, Naharayim, Bethsaida Nature Reserve, and the Jesus Trail – a 65km hike trail from Nazareth to Capernaum. Liked this article? Join a One Day tour to the Sea of Galilee. 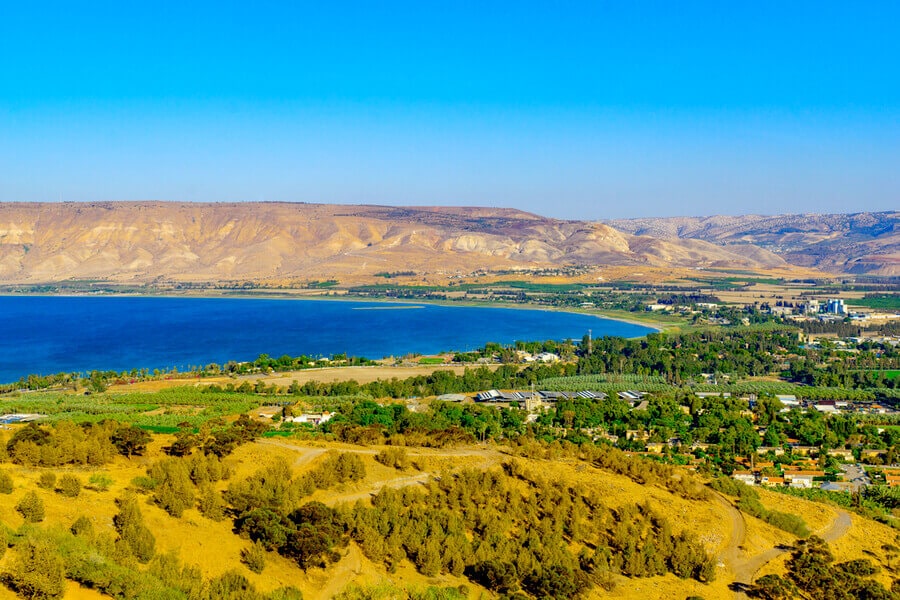 View of the southern part of the Sea of Galilee, Northern Israel. Photo credit: © Shutterstock