How to Cover all Christian Sites of the Galilee?

Christian sites in Israel are found mainly in Jerusalem and the Galilee where Jesus grew up and where he spent his ministry traveling from village to village preaching the word of God. The Christian sites of the Galilee should not be missed! They have great Biblical significance and are surrounded by the Galilee's stunning scenery. A good way to plan a trip to the Galilee that covers all Christian sites is to spend at least two days in the region. If your time is limited then spend a day touring just the Christian highlights along the shores of the Sea of Galilee (Kinneret in Hebrew). Your trip to the Galilee will probably start with a drive up Israel's Mediterranean coast past attractions like Caesarea and Haifa. Turning inland you'll travel through the Valley of Armageddon, where the prophesized Final Battle is predicted to take place during the End of Times. From here you have a view of Mount Tabor, site of the Transfiguration.

Christian Sites around the Sea of Galilee 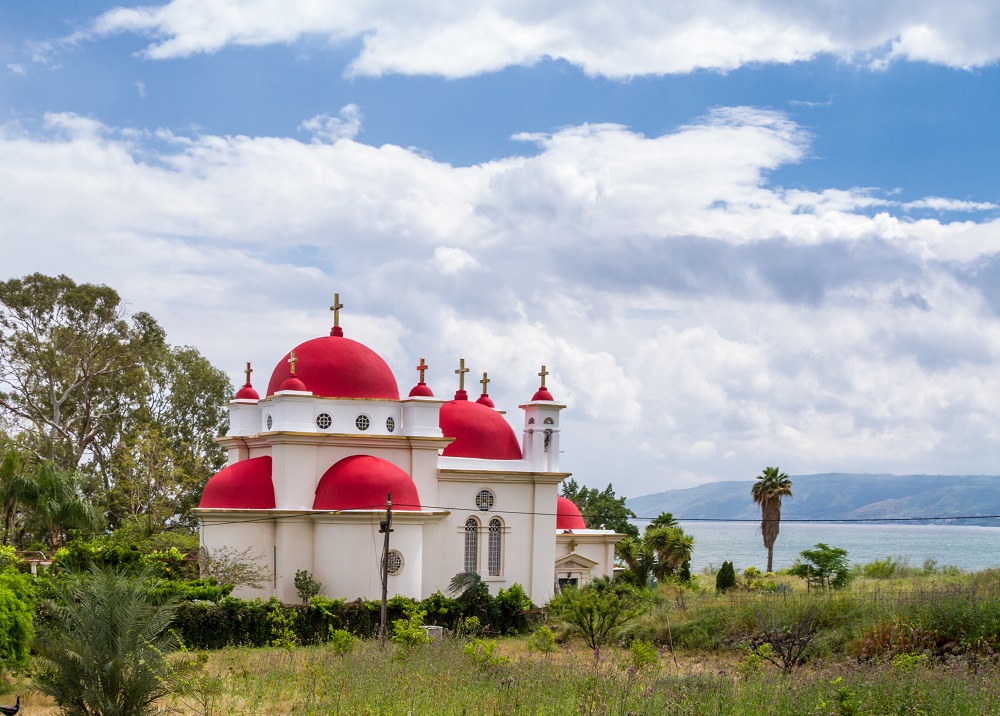 Traveling over rolling green hills and past lush farmlands you'll look down on the Sea of Galilee nestled in an idyllic valley. Starting at the southern end of the sea move up the western shore past the city of Tiberias. The Sea of Galilee is where Jesus walked on water (John 6:19-21) and where he calmed the storm (Matthew 8:23-26). Stop in Magdala, once a small fishing village and home to Mary Magdalene. Travel a little further along the shore to Ginosar, a modern-day kibbutz in the shadow of Mount Arbel. The kibbutz is home to the Yigal Allon Museum which holds the Jesus Boat. During the 1986 drought, the Sea of Galilee's water level dropped dramatically revealing the remains of this 1st-century fishing boat buried in the bed of the lake. The fishing boat would have been the same kind of fishing vessel used by the disciples. The Bible tells us how Jesus crosses the water, landing in Ginosar where the people touched the fringe of His cloak and were cured of their ills.
One of the most delightful Christian sites along the shore of the Galilee is Tabgha, site of the miracle of the multiplication of loaves and fish. Originally a 4th-century chapel was built here to mark the site of the miracle. A Byzantine Nile-themed floor mosaic has been preserved in the church along with a large rock where Jesus may have stood as he performed the miracle. Nearby is the Church of the Primacy of St. Peter; the traditional site of Christ's 4th appearance after his resurrection (John 21:1-24) and where he conferred primacy on Simon Peter giving him leadership over the church. Another incredible Christian site on the shore of the Sea of Galilee is the Mt. of Beatitudes crowned by a unique church, designed by Antonio Barluzzi in the 1930s to mark the place where Jesus gave the Sermon on the Mount. Also visit Capernaum, once the hometown of Peter, Andrew, John, and James. Here Jesus based himself during his ministry; exorcised demons and healed the slave of a Roman centurion. The main Christian sites in Capernaum today are the excavated Byzantine village; remains of a 1st-century synagogue and an octagonal church built around the remains of what is believed to have been Saint Peter's home. 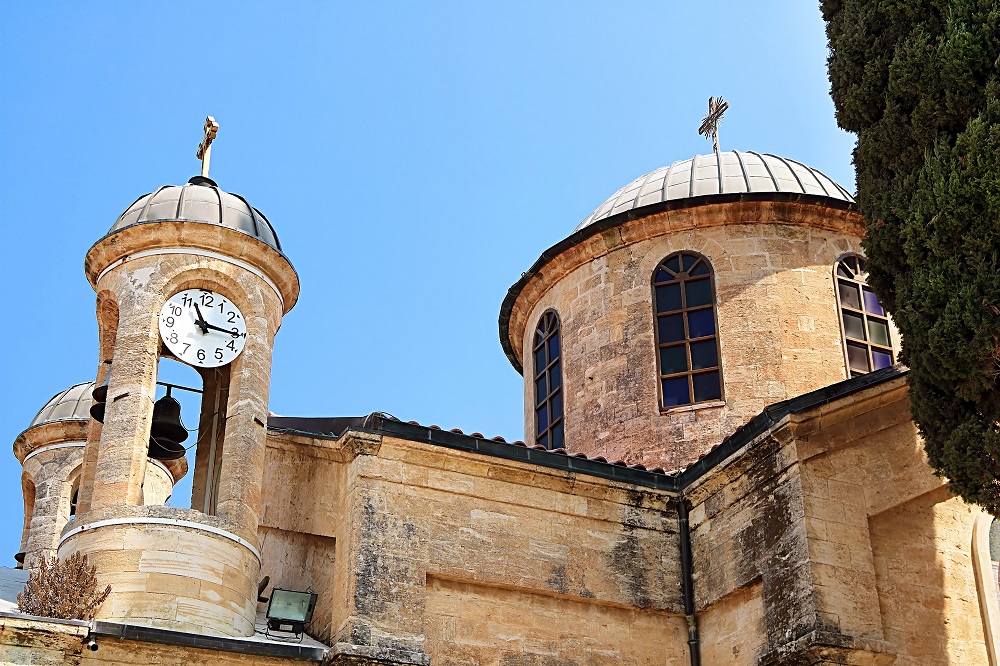 If you'd like to venture to the eastern shore of the Sea of Galilee, at the foot of the Golan Heights you can stop at Kursi, site of the miracle of the swine (Luke 8:26-39). Here you can see the ruins of a large Byzantine monastery and church and see the remains of a 5th-century church mosaic floor. If you are with a tour you will probably also venture up into the Golan Heights to visit places like the Shalom Observatory; former Syrian fortifications and Katzrin where there is an excavated and reconstructed Talmudic-era (4th-8th century) village. The easiest way to see these Christian sites is to take a one or two day tour like the Sea of Galilee, Cana, Magdala & Mt. of Beatitudes Tour. At the southernmost point of the sea where the River Jordan flows out of the Kinneret is the baptismal site Yardenit. Tours stop at Yardenit where it is possible to be baptized in the Jordan as Jesus was. Also visit Kfar Cana, famed as the site where Jesus attended a wedding and changed water into wine. The 19th century Wedding Church commemorates this miracle and encompasses the remains of Byzantine mosaics from an earlier 5th-6th-century church. The church holds two ancient stone jars similar to those used to hold wine during the Biblical-era.

Nazareth and other Christian Sites in the Galilee 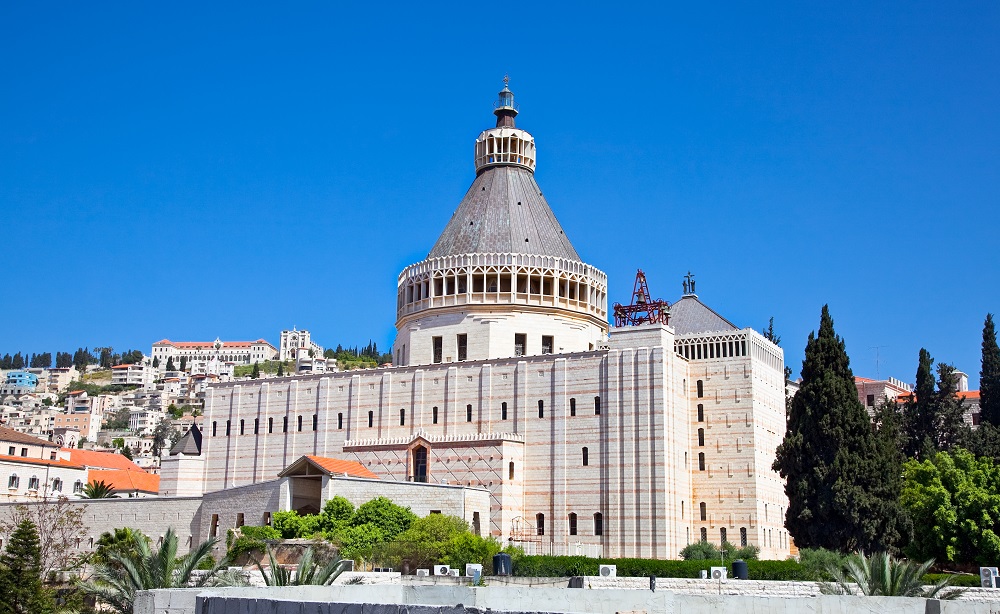 One of the top Christian sites in the Galilee is Nazareth; the Bible tells us how Mary and Joseph originated here and how Jesus spent his childhood with his family in Nazareth. It was here that the Angel Gabriel appeared to Mary and revealed the news of her future divine pregnancy and the son that would be born. The Church of Annunciation in Nazareth marks the traditional site of this Biblical event and was built over the grotto, believed to have been Mary's home. The Church of the Annunciation is a two-story basilica built in 1969 with a modern design. The church has a high cupola shaped like an up-turned lily representing Mary's purity. One of the most outstanding features of the church is the collection of representations of the Virgin Mary created in a variety of traditions from around the world.
St. Joseph's Church stands not far from the Church of the Annunciation in Nazareth. Built in 1914 St. Joseph's Church is on the same site as the remains of a Crusader church. Beneath the church is a 1st-century grotto system believed to be the former home of the Holy Family and Joseph's carpentry workshop. Visitors can descend into the grottoes and see the original grotto-home. Imagine walking into Mary and Joseph's house; seeing where young Jesus would have played and where Joseph would have worked in his carpentry. While in Nazareth stop at Mary's Well and the nearby Saint Gabriel Church of the Annunciation where the Greek Orthodox tradition believes the annunciation took place. Just outside Nazareth, you can see Mount Precipice (Mount Kedumim or Mount of the Leap) where Jesus was chased out of the city and made a miraculous leap, disappearing from the ridge.