Many tourists visit the Old City of Acre without realizing that there is a complete city beneath the ancient streets. The Acre Crusader City was built during the 12th century and destroyed in 1291 when the Mamluks conquered Acre and built their own city on the Crusader ruins.

After painstaking excavation and restoration, visitors can now visit Acre’s Crusader City and see the massive Crusader halls, passages, tunnels and chambers. Despite the impressive structure and size of the Crusader City maps found in the Vatican library show that only about 4% of Acre’s Crusader City has been recovered. Acre is a UNESCO World Heritage Site.

Acre’s natural harbor made it a valuable entry point to the Holy Land and Christian pilgrims on route to Jerusalem would often land in Acre. Acre was the connection between medieval Europe and the Middle East. Ships arrived from across the continent bringing foreign cultures, ideas, pilgrims and merchandise.

Acre (also known as Aca, Akko, Akka, Acco or St Joan d’Acre) is one of the oldest cities in the world, situated just north of Haifa along Israel’s Mediterranean coast. The city has seen conquerors come and go over the last 4,500 years (at least). One of the most fascinating periods of Acre’s history was during the Crusader era.

Who Were the Crusaders of Acre?

The Crusaders were Christian monastic soldiers on a mission to protect the Holy Land and provide safe passage to visiting pilgrims. The Crusaders believed that Jerusalem was under threat from the Muslims. They made four crusades to the Holy Land to try and secure the land of Christ for Christians.

The First Crusade (1187-1099) secured Jerusalem as the capital of the Kingdom of Jerusalem. The Crusaders held Acre from 1104 until 1187 when Saladin took the city. With the help of Richard the Lionheart the Crusaders retook Acre in 1191 after a two-year siege as part of the Third Crusade. During the Third Crusade, the Christians did not retain their stronghold in Jerusalem and so they planned to transfer their headquarters to the new Crusader buildings in Acre.

New floors and new wings were added to the original Hospitallers Center. Acre became the capital of the Second Crusader Kingdom (1191-1291). Under the Crusaders Acre was known as St John d’Acre, the city was named in honor of John the Baptist, the patron saint of the Knights Hospitallers. The Christians remained in the city until 1291 when the Mamluks destroyed Acre and expelling all Christians.

The city lay in ruins for about 500 years until the Ottomans arrived. The Ottoman Turks rebuilt the city on top of the Crusader ruins leaving a hidden city beneath the ground. In the 1950s excavations began and today the Acre Crusader City is once more accessible.

The Knights Templar was a monastic military Crusader Order that wore white clothing with a red cross. They were first established in the Holy Land on Jerusalem’s Temple Mount (hence the name – Templars). When Jerusalem was taken by Salah a-Din in 1187 the Templars moved to Acre where the Hospitallers had already established a presence. The Templars built their fortress in the southwestern section of the city.

The strong fortress ran along the seafront and the entrance was protected by two large towers. The Templars and Hospitallers didn’t always see eye-to-eye but their fates were intertwined. When the Mamluks arrived in 1291 both Crusader Orders were expelled. The Templars carved out a tunnel running from their fortress in the west to the port in the east. The underground tunnel was a possible escape route if they were ever attacked.

Sites of the Acre Crusader City

Here you can stop at the Visitor Center and see an introductory film about Acre and the Crusaders. Then the adventure begins. Visitors are given an audio guide and can enter the underground Crusader City going from one hall into the next.

In the halls of the Citadel visitors can see demonstrations of traditional medieval arts and crafts like glass blowing, weaving and leather craftsmanship.

The Fortress Courtyard - This outdoor space covers 1200m² and is surrounded by arches supporting stairways leading to the upper floors.

The Northern Hall - This expansive space is divided into six smaller halls connected by arched and covered by a 10-meter high barrel-vaulted ceiling. The outer walls are 3.5 meters thick. An opening leads to the Hall of Pillars via a 3-meter wide corridor.

The Pillars Hall - In this impressive 1300m² space exhibits, art work, demonstrations and archaeological displays can be seen. The vaulted ceiling is supported by square stone pillars. During the Crusader period, the hall would have been used for meetings and as a storage space.

The Beautiful Hall - This space was named by the excavators who admired the finely chiselled stonework and arched windows. The Crusaders probably used this room as a public rest station for pilgrims.

The hall gets its name from the crystalline sugar that was produced and stored in this hall. Earthenware utensils used for sugar production where found in the Sugar Bowl Hall. Sugar was a major industry at the time.

Dining Hall - The Dining Hall (Column Hall) would have been filled with long tables and benches where the knights would eat together. It is one of the most impressive rooms in the Crusader complex. The 10-meter high room has three stunning stone columns 3 meters in diameter supporting the vaulted ceiling.

There are beautifully decorated capitals. Louis VII visited Acre during the Second Crusade and was impressed by the relief of a lily on the wall of the Crusader dining hall. Following this, the lily was incorporated into the royal Bourbon family coat of arms (fleur-de-lys).

The Garderobe (medieval toilet) - The Crusader public toilet room consisted of rows of toilet seats that drained through pipes in the walls into an underground collection room and from there into the central municipal sewage conduit.

Prisoners’ Hall - Criminals were held in the window-less Prisoners’ Hall. We can still see the deep holes in the wall where chains would have been attached to shackle prisoners.

Templar Tunnel - Today it is possible to walk through the tunnel beneath Acre form one end of the Old City to the other, emerging at the small Acre port. The tunnel runs for 350.5 meters from the former Templar Fortress to the port and was cut through the natural stone.

Want to explore the Underground Crusader City? Join our tour to Caesarea, Acre and Rosh Hanikra. 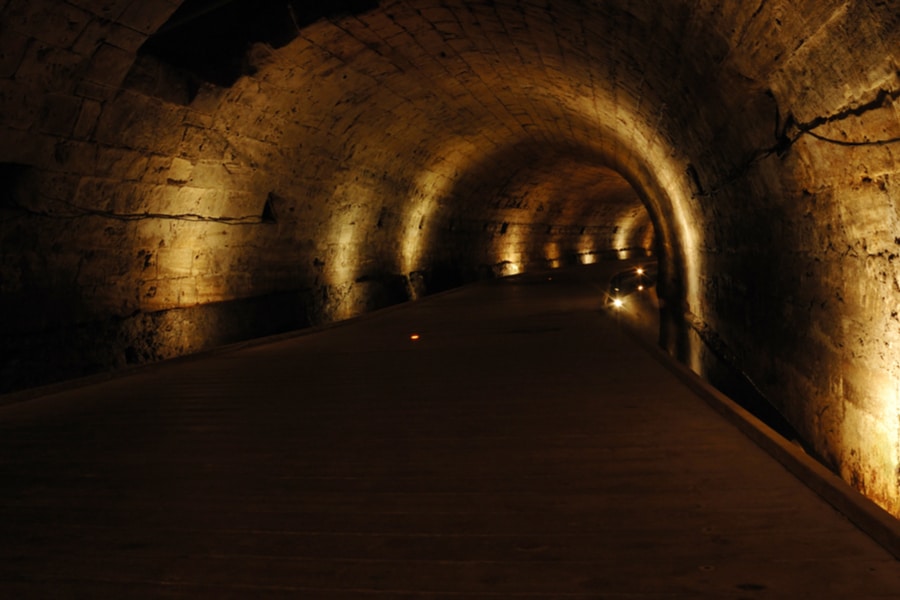