The Templar’s Tunnel runs beneath the Old City of Acre from the site of the former Templar fortress in the southwestern of the Old City to the southeast where it meets the sea. At the time of its construction in the 12th century, the 350m-long tunnel served as a strategically hidden passageway connecting the fortress to the port that could be used for a quick escape and to transfer goods from the port to the fortress. The lower part of the passageway was tunneled through natural stone while the upper walls were hewn stones that form the tunnel’s arched ceiling.

Who Were the Templars?

The Templars were a Crusader-era military branch of the Catholic Church whose mission was to protect pilgrims who came to the Holy Land. The Templars were active from 1119 to 1312. The Templars first settled in Jerusalem as protectors of Temple Mount, hence their name - Order of Solomon’s Temple or the Knights Templar. The Templars wore the distinctive white tunic with a red cross on the breast.

History of the Templars in Acre

In 1187 Salah al-Din conquered Jerusalem and the Templars relocated to Acre in 1192. They built a fortress with 8.5m thick walls and constructed the tunnel to the sea. The Templars remained in Acre from 1192 to 1291. When the Crusaders lost the Battle of Hattin (1187) against the Muslims Acre was seized and the Christians fled

The Knight Templars are often confused with the Hospitallers, a Christian order that was in Acre around the same period and also had an impressive fortress in the city. Both the Hospitallers and Templars were officially disbanded in 1312. In the 18th century, Dahar al-Omar dismantled the Templar fortress and used the stones to build the city walls.

The tunnel was discovered in 1994 flooded with water. It has since been excavated and opened to the public. Today visitors to the Templars’ Tunnel can walk along a wooden walkway through the tunnel and see projected images on the walls illustrating the Templar history. 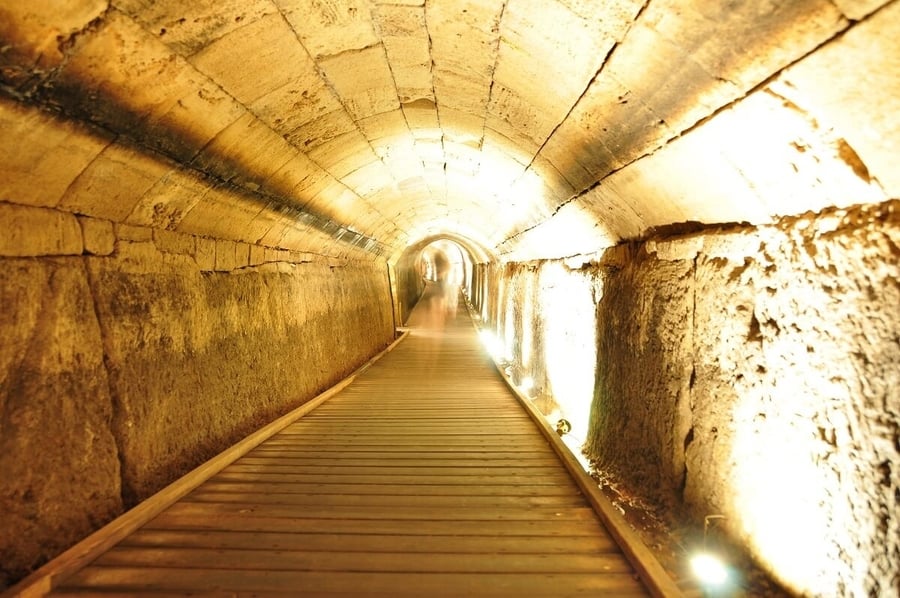