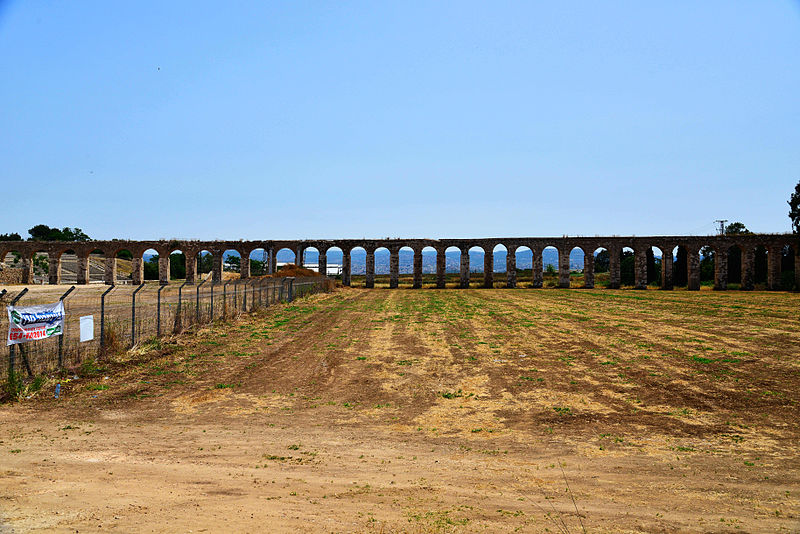 The incredible fortress city of Acre is on the coast between Haifa and Nahariya in the Western Galilee. Thousands of years ago people settled here to have access to the sea. But Acre lacked a freshwater source. In the Hellenistic Period (c.323BC-31BC) engineers created an aqueduct system to bring water to Acre from springs north of the city. In the 18th-century, the population of Acre had grown to about 40,000, and they needed a better water supply. Ottoman ruler, Pasha al-Jazzar extended the Acre aqueduct to accommodate the city’s growing needs. When Napoleon held Acre under siege in 1799, the system was badly damaged. Al-Jazzar’s adopted son and successor, Suleiman, rebuilt the water system in about 1814. The magnificence Pasha Aqueduct remained in use until 1948. Today you can still see sections of the 200-year-old aqueduct stretched out across fields and farmlands near Acre.

The water source was 14km north of Acre, at the springs near Kibbutz Cabri. The springs were on an elevated piece of land, about 70 meters high, and Acre is at sea level. This meant that Ottoman engineers could use the natural topography and gravity to channel the water towards the city. The first stretch of the system ran along a raised open aqueduct elevated by a series of beautiful arches. Each kilometer of the aqueduct had a 5-meter drop so that it gradually sloped down towards Acre. The raised aqueduct then joined the second stage of the system. This stretch of the route ran underground with a series of Siphon towers (suterazi towers) at intervals along the way. Water pressure forced the water up into the towers, through ceramic pipes to a pool at the top of the tower. Then gravity pulled the water down a second pipe to continue its journey underground to the next tower. A bit like water climbing over a wall, with gravity and water pressure forcing it up and over.

Where to See the Acre Aqueduct

A tour guide can show you the 1km-long section of the Hellenistic aqueduct near Ness Harim and several surviving sections of the Ottoman-era aqueduct. The most impressive section is the elevated aqueduct near Kibbutz Lohamei HaGetaot. At Manof Youth Village the raised aqueduct ends and the water continues through underground pipes. This section uses water pressure and gravity instead of the natural slope of the land. There are seven siphon towers, each 0.5km apart. See the towers at El A’uoji, in the Wolfson neighborhood, and on David Noi Street, in Acre. Then the water channel reaches Acre’s northern moat, and the pipes go underground beneath the city walls. The stone pipes continue to the defensive north tower and into the city.

Once the water reached Acre, they channeled it into several supply lines. Some of the water was stored in underground cisterns, like the one beneath the Al-Jazzar Mosque. Other channels led to over 30 public water fountains (sebils), like the one that stands at the entrance to the Al-Jazzar Mosque. Thanks to the innovative Ottoman engineers, the freshwater made this incredible 14km-long journey to the water fountains of Acre.