The city of Haifa covers the slopes of Mount Carmel and the land at the foot of the mountain going all the way to the sea. The Baha’i Gardens are at the heart of Haifa cascading down Mount Carmel in 19 terraces. At the center of the gardens is a small white shrine topped with a gold-colored dome. The gardens are a religious site for followers of the Baha’i faith and the shrine is the final resting place of the faith’s founder and prophet, The Bab. The Baha’i Gardens are a UNESCO listed World Heritage Site. The true beauty of the gardens can really be appreciated when you understand the religious philosophy behind the gardens.

The Bab (Sayyed Ali Muhammad Shirazi) was born in Persia in 1819; he founded the Babism faith and claimed to be the inspired interpreter of the Quran.  He went on to name himself the Prophet of a New Age and the Essence of God. “Bab” means the door or gateway. The Bab composed extensive written material and teachings. As his movement gained support from more and more people the Irani clergy and government began to persecute and kill Bab followers. The Bab was executed by firing squad in 1850. The Bab is entombed in the beautiful shrine at the heart of the Baha’i Gardens in Haifa.

Baha’ullah was a follower of The Bab and founder of the Baha’i faith based on the writings of The Bab. Baha’ullah was a Persian nobleman who lived a life of privilege before turning to Bab for spiritual enlightenment and dedicating his life to the poor and underprivileged. He became known as the Defender of Justice. Baha’ullah developed a doctrine based on The Bab’s writings and said he was God’s messenger for his generation. He taught that all religions preached the same basic spiritual theories and that we were heading towards an idyllic era of human unity.  After imprisonment and persecution for his beliefs Baha’ullah and followers were banished from Persia. They traveled within the Ottoman Empire for 10 years before being exiled to the Ottoman-ruled Holy Land and prison in Acre. Baha’ullah was eventually released, lived out his life in Acre and passed away in 1892. Baha’ullah is buried in the Baha’i Gardens of Acre.

The Bab first introduced the concept of “He Whom God Shall Make Manifest.” According to this belief God sends a Messianic “messenger” in each generation. Past messengers have been Abraham, Buddha, Jesus, Mohammed and others. The three main principles of the Baha’i faith are oneness with God; oneness of religion and oneness of humanity. The Baha’i believe in the unity and equality of all mankind, no matter their religion. Today there are Baha’i followers in most countries and they number approximately 5-7 million. The Baha’i faithful elects Spiritual Assemblies to govern each region. Then the Spiritual Assemblies vote for representatives to the Universal House of Justice. This nine-member governing institute oversees the worldwide affairs of the Baha’i faith. Their headquarters is on the grounds of the Haifa Baha’i Gardens not far from the Shrine of Bab.

The stunning gardens are landscaped to geometric perfection offering a visual illustration of the tenets of the Baha’i faith – oneness, unity and diversity of mankind. Everything is exactly aligned to create a harmonious effect. There is symmetry in the design and a carefully planned layout of colors among the plants and flowers. The harmony and symmetry of the gardens is designed to bring peace and inspire your soul. The 19 terraces are designed as waves or circles all drawing your attention to the Shrine on the central terrace.

The Baha’i Gardens have more than 200,000m² of flowers, trees, plants, paths and water features. A stairway runs down the middle of the perfect lawns with waterways trickling alongside the paths. Urns, statues and decorative elements adorning the gardens all have deep religious significance for the Baha’i. The gardens are tended meticulously by a team of 200 volunteer gardeners and the flower displays are changed seasonally. The number 9 is sacred in the Baha’i faith and so it has been used in the design of the gardens. There are 9, 19, 99 or 999 of each element of the garden. There are 999 steps along the path; 19 terraces, 9 terraces from the shrine to the center of the gardens etc.

The Haifa Baha’i Gardens have four sections. The Shrine of the Bab must be visited with all the reverence of a religious site. Visitors remove their shoes, dress with modesty, speak softly and behave with respect when visiting the Shrine. There are Outer Gardens and an entrance plaza at the foot of the terraces. The gardens have an observation balcony almost at the uppermost point. From the spacious balcony visitors have spectacular views of the gardens and panoramic views of the city and Bay of Haifa. 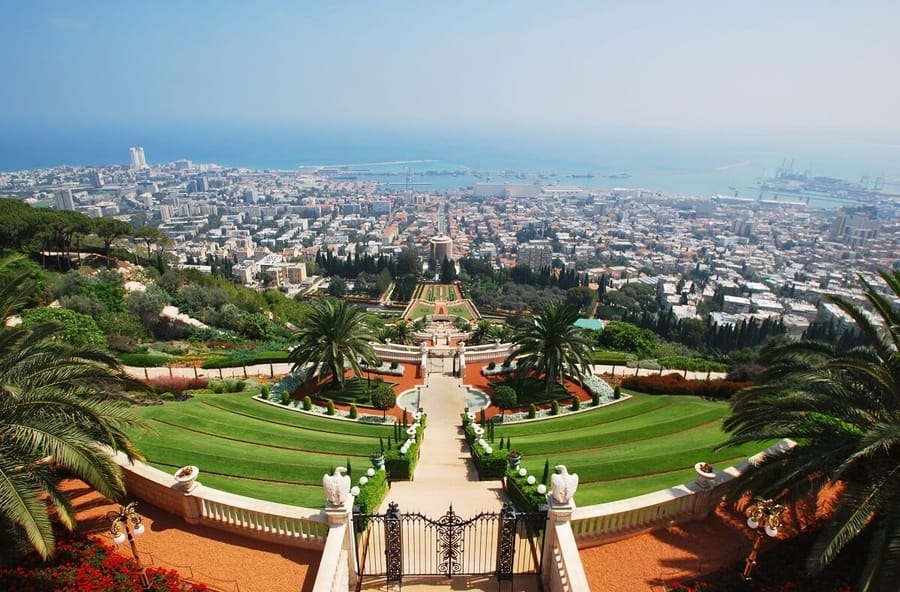