By North American or European standards, Israel is not a large country.  In fact, you can easily travel from one end to another i.e. the Golan Heights to Eilat, in a few hours. Whether you’re using the bus, train, taxi or renting a car, it’s easy to move between cities, which means you can pack a lot into your trip. 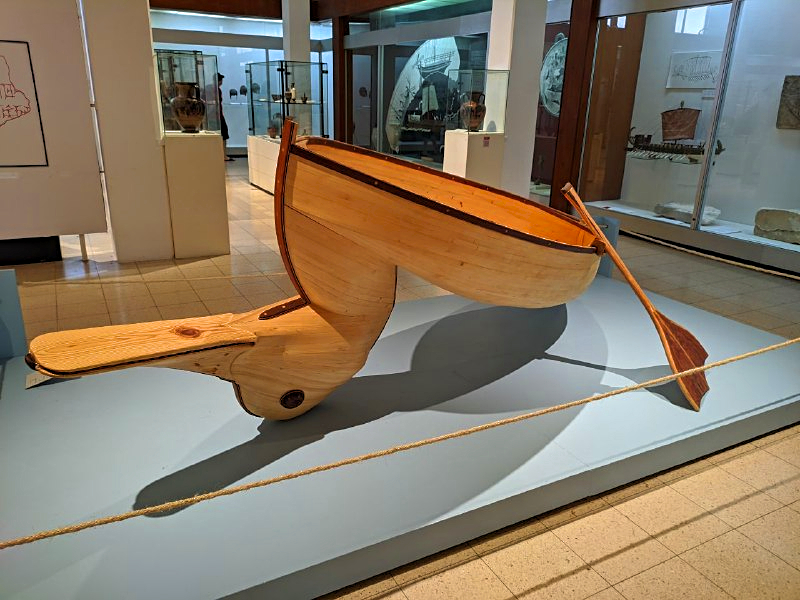 Today, we’re looking at how to get from Haifa to Jerusalem. Haifa is Israel’s largest city in the north of the country and sits on the Mediterranean coast, on the slopes of Mount Carmel. Within the city itself, there are some fine things to see, including the iconic Bahai Gardens, the German Colony neighborhood (with its Templer houses), Wadi NisNas (with its tiny alleyways, old stone houses, and colorful market), and the National Museum of Science, Technology, and Space.

Not too far from Haifa itself are beautiful nature reserves, parks, hiking trails, and also attractions such as Acre (an ancient Crusader City), Rosh Hanikra, in the Western Galilee, with its caves and grottos, and also Nazareth, the city where Jesus’ birth was announced by an angel and where Jesus himself spent many of his formative years.

Of course, no trip to Israel would be complete without a visit to Jerusalem, a city of three world faiths and home to some extraordinary museums, places of worship, and archaeological sites.  Staying in Haifa doesn’t mean a day trip to Jerusalem is out of the question either, as long as you’re prepared to make an early start. The actual distance between Jerusalem and Haifa is just 120 km (74 miles), which is really quite manageable.  Let’s take a look at some of the ways to get between these two cities, and some step-by-step directions to make your journey run smoothly. 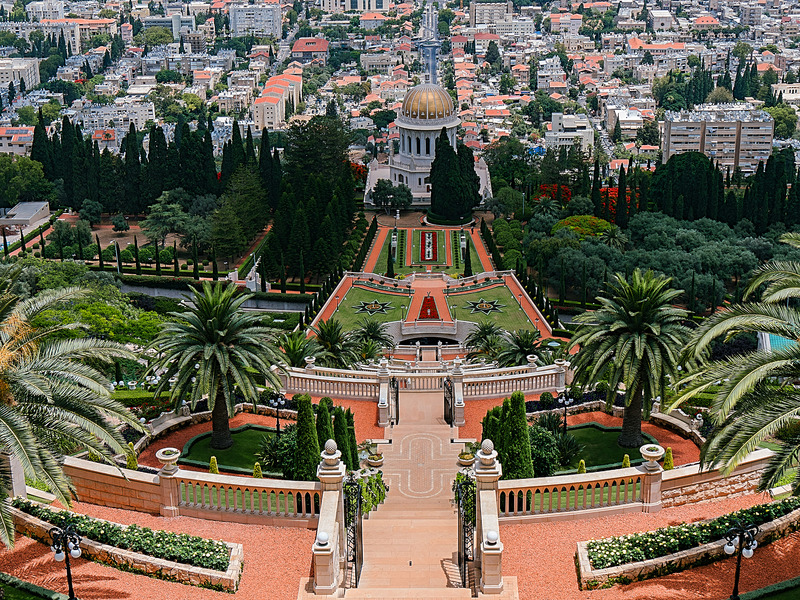 1. Bus from Haifa to Jerusalem

Israel’s public network is cheap, efficient, and modern, and traveling from Haifa to Jerusalem is easy and inexpensive. Without traffic, the journey should take around 1 hour 40 minutes. There are different bus stations at which you can catch an Egged bus (Israel’s national bus line) including Haifa Merkazit Hamifrats/Inter-City Platform, Hof HaCarmel, and the Technion/visitors station.

HaMifratz central bus station is the main bus station of the Haifa Bay district. It is next to Haifa's central railway station (see below under the ‘train’ section) and also the Lev HaMifratz shopping mall. Egged bus from Haifa to Jerusalem (№960) leaves from Floor 3 Haifa Merkazit Hamifrats/Inter-City Platform bus station, every 20 minutes. It takes, on average, 1 hour and 44 minutes, and a one-way ticket costs 36 NIS (11 USD).

Hof HaCarmel is close to the sea and Haifa’s central bus station. It serves local buses within the city and all Egged buses heading south. Passengers can ask for a free transfer to urban buses when they buy their inter-city ticket to continue from one central bus station to the other one, or into the city. From Hof HaCarmel bus 947 runs less frequently but is also a direct service, taking just under 2 hours. Again, it costs around 36 NIS.

Technion -  the Israeli Institute of Technology has a visitors center and buses run from there. From the Technion University, it is possible to take the 796 to Mishmar HaGvul junction, walk 3 minutes then catch the 942 to Jerusalem. All buses alight at Yitzhak Navon, the central bus station in Jerusalem, which is adjacent to the city’s light railway (the best way to travel around Jerusalem). 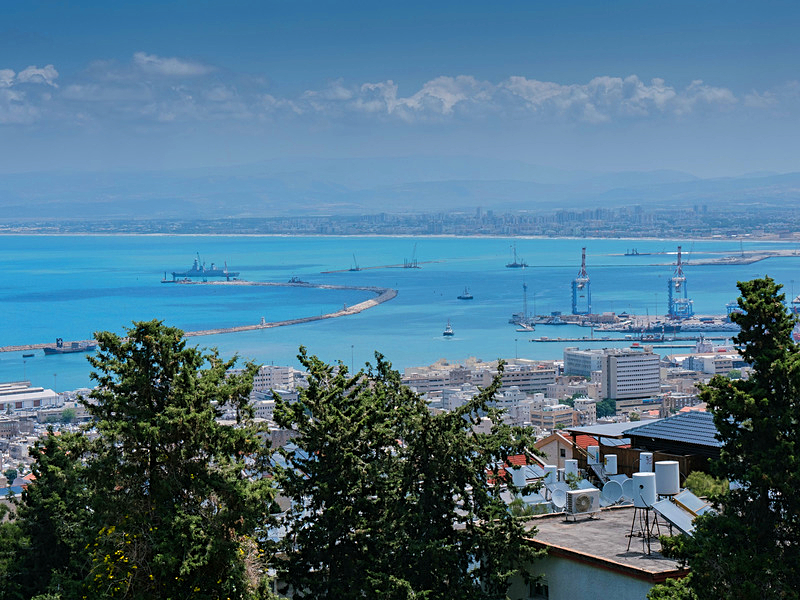 2. Train from Haifa to Jerusalem

Taking the train from Haifa to Jerusalem is an excellent way to travel - Israeli trains are comfortable and modern and the service is frequent - every half an hour.  At present, it is necessary to change trains at either Tel Aviv Savidor or Ben Gurion Airport stations - there is a connection time of around 11 minutes - before continuing on to Jerusalem. The journey, in general, takes between 1 hour and 42 minutes to 2 hours.

Most tourists will wish to alight at Jerusalem’s main train station, Yitzhak Navon. Spacious and modern, it is conveniently located on Jaffa Road, next to the Jerusalem Central Bus Station and the light railway (which runs every 3-5 minutes, both to downtown Jerusalem and the Damascus Gate, in the Old City).

Payment can be made by buying a ticket from the cashier's office, by booking through the Israel Railways website, using a green Rav Kav card loaded with pre-paid credit (which can be purchased from any station and many pharmacies and stores in Israel), or the Rav Kav mobile telephone app. The cost of a regular one-way ticket is 42 NIS (around 13 USD).  Trains begin running at approximately 5.30 am and the last train leaves Haifa at approximately 21.30, arriving in Jerusalem two hours later (11.30 pm).

Trains depart from three stations within Haifa itself - Center HaShmona, Bat Galim, and Hof HaCarmel. The largest of these is HaShmona which is situated at Plumer Square, on Independence Road. The station itself was built by the British under the Mandate, in the Bauhaus style, and opened in 1937.

Bat Galim was Haifa’s major train station from 1975 until the early 2000s. It is within walking distance of the port and also the city’s Rambam hospital. Hof HaCarmel - located next to the Carmel Beach central bus station. Situated on Sakharov street - this is the city’s busiest train station. It is within walking distance of two shopping malls and the MATAM high-tech park. The train in Israel does not run between Friday afternoon and Saturday evening (two hours before Shabbat commences and an hour after it ends). 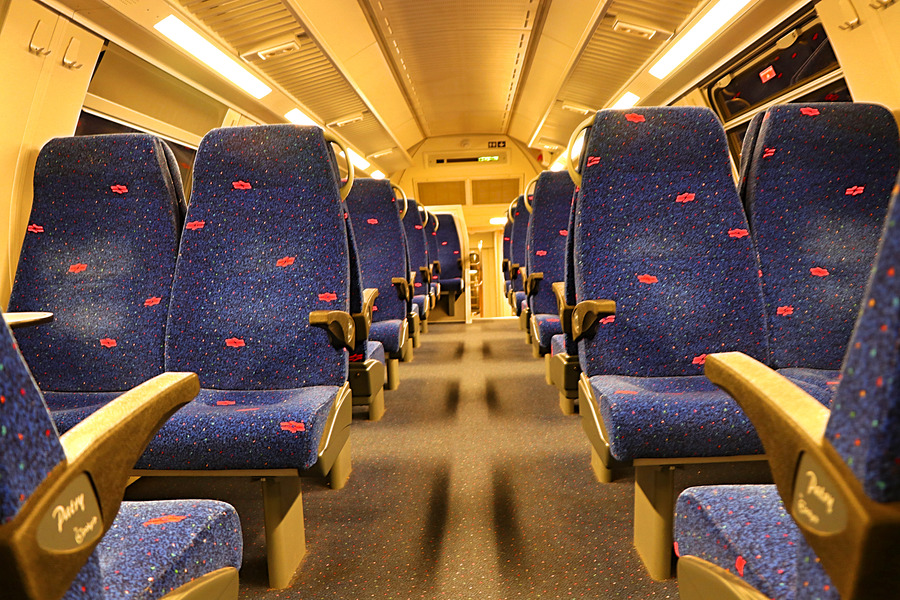 Interior of the Israeli train. Photo by Lital Bamnulker on Unsplash

3. Getting from Haifa to Jerusalem by Taxi

Taxis are plentiful in Israel and it should not be difficult to find one to take you to Jerusalem. You can either ask your hotel concierge to book one for you or call one of the numerous operators in the Haifa area. You should look to pay somewhere between 700-800 NIS (215-250 USD). One of the most popular companies to use is BookTaxi.

4. Getting from Haifa to Jerusalem with Private Transfer

Private transfers are very easy to arrange in Israel but it's advisable to book them through a trustworthy Israeli tour operator, who has contacts within the industry and can ensure you will be put in touch with a reputable and honest operator. Once you are satisfied with the quote, you will be charged by credit card and all matters forthwith will be handled by the tour operator, giving you complete peace of mind.

At Bein Harim, we are always happy to help obtain quotes for people visiting Israel who need a private taxi - please call us or send us your details on our ‘Contact Us’ form and we will get back to you promptly, with a competitive offer. 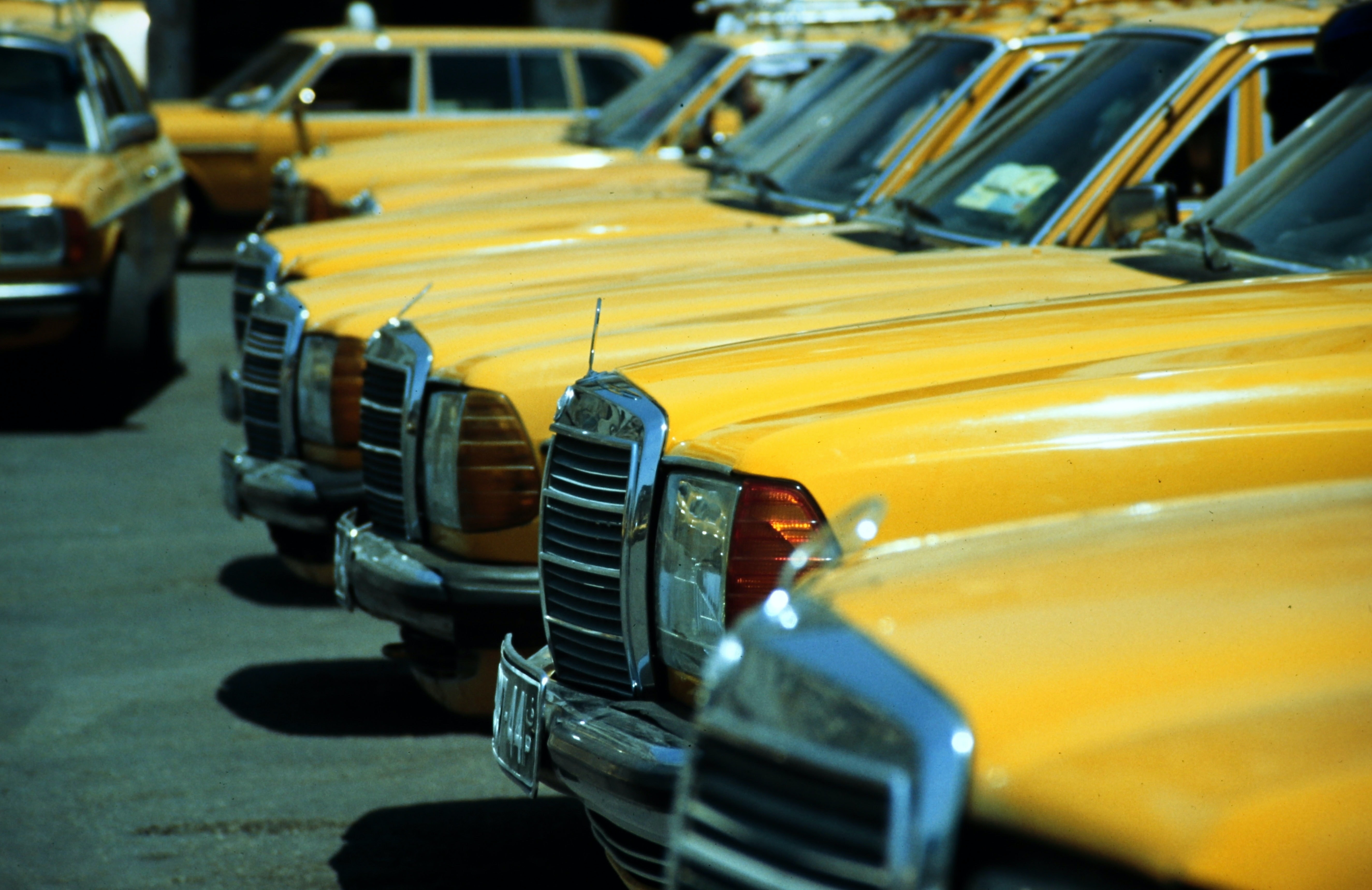 Haifa is becoming an incredibly popular destination for international cruise liners, and if you have a full day on land, traveling to Jerusalem is a wonderful idea.  A ship-to-shore excursion to Jerusalem is really worth considering - you will be picked up at Haifa port by a private guide and whisked off to Jerusalem, giving you time to see world-famous spots, historical and religious landmarks, and even walk on the Mount of Olives.  You’ll have a comfortable and interesting experience, and it will all be timed perfectly so you’ll return to Haifa before your ship leaves the port.

6. Getting from Haifa to Jerusalem with a rental car

Renting a car in Israel is a popular way to see the country. Rental charges are not exorbitant and using a car to get around gives you a level of freedom that nothing else can. Whilst parking can be a challenge in Jerusalem (and it may be advisable to pay for a spot for the day), it’s a fast way to get you from one city to the next. Taking Route 90 (Yitzhak Rabin Highway) will usually take about 2 hours, as long as there is not too much traffic on the road.

Popular rental hire companies in Israel include Eldan, Hertz, Shlomo Sixt, and Thrifty, and, on average, renting a car costs around 260 NIS per day.  All are convenient to work with, accessible, and competitively priced, and if you shop around beforehand you can get some great deals. 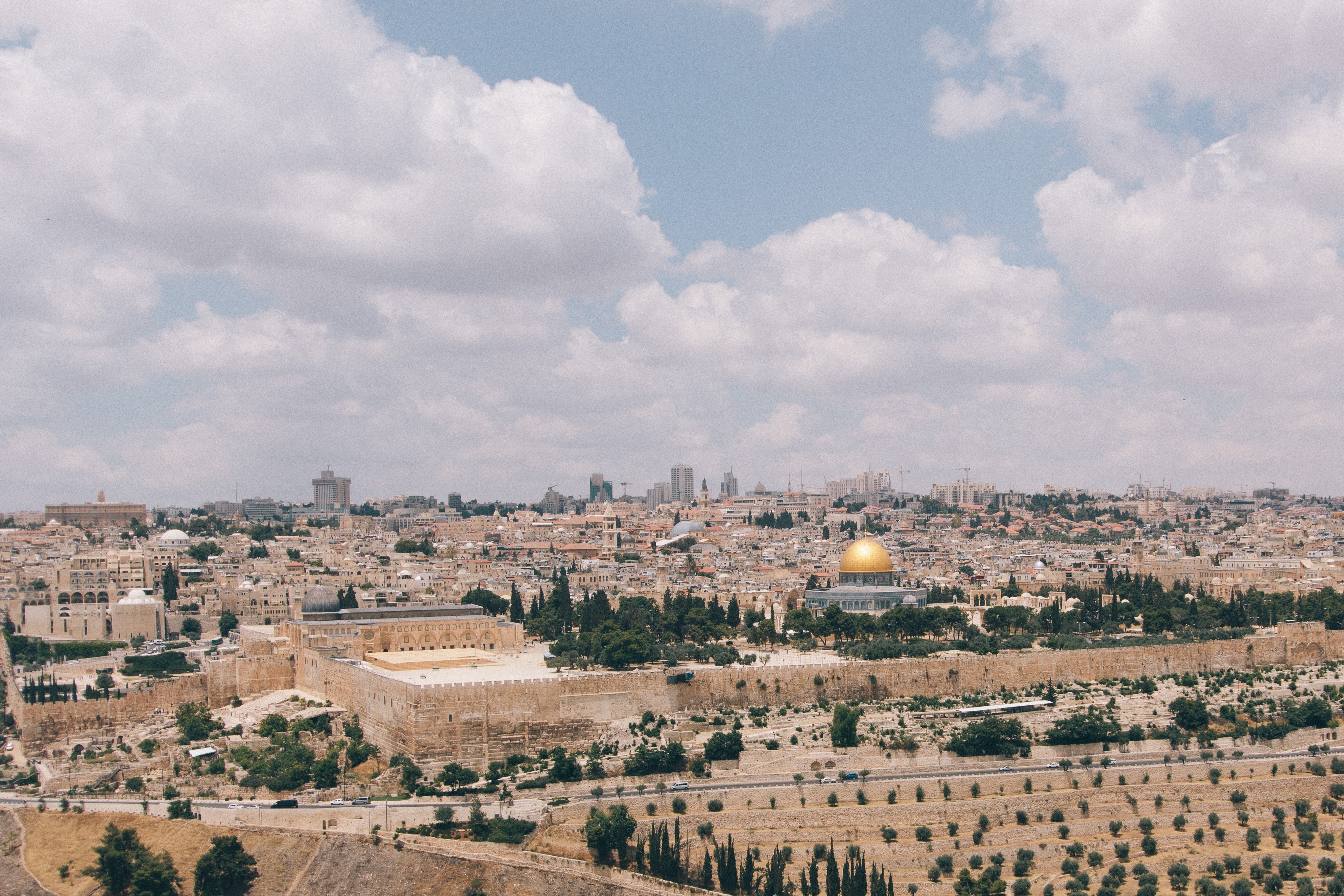