Israel’s famous for many things, including religious landmarks, archaeological sites, vineyards, nature reserves and deserts. But what about its waters? Many people think instantly of the Mediterranean Sea if they envisage travelling to Israel for a beach holiday but there’s another option too - and a great one -The Red Sea. 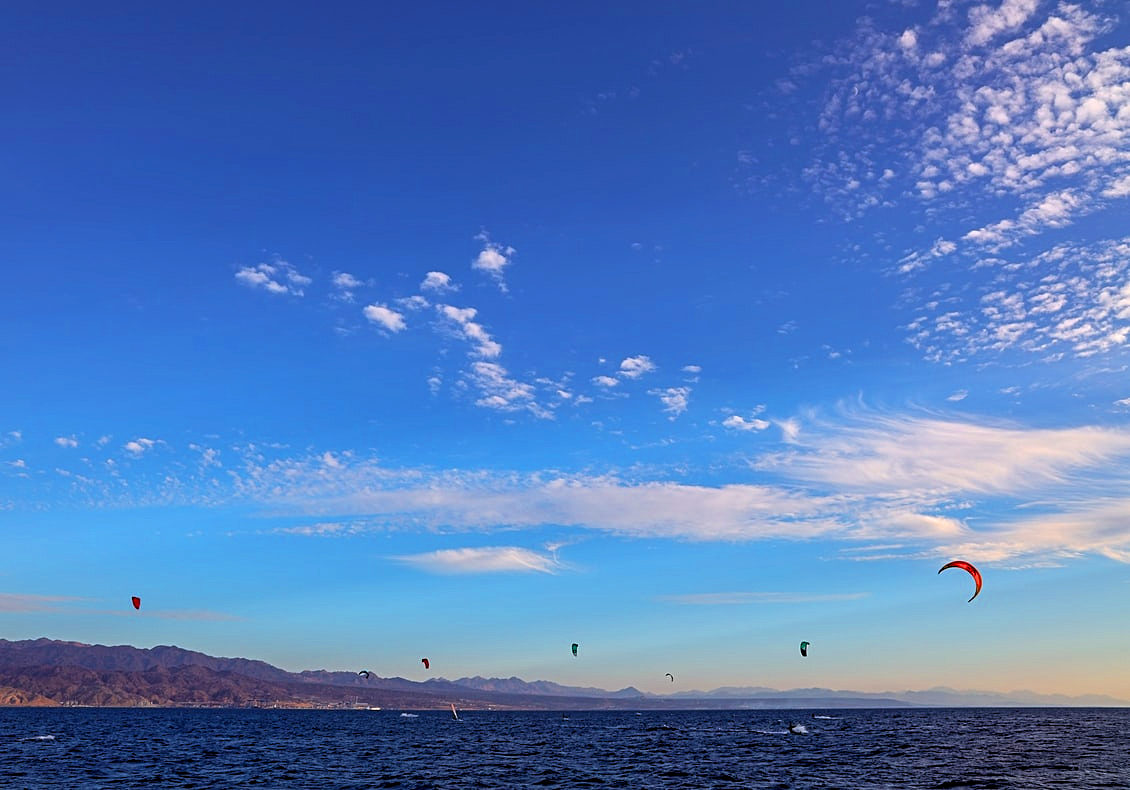 Kitesurfing in Eilat, Israel. Photo by Mor Shani on Unsplash

Where is the Red Sea located exactly? In the heart of the Middle East, sharing its marine waters with Israel, Jordan, Egypt, Saudi Arabia, Yemen, Sudan, Eritrea, and Djibouti. An inlet of the Indian Ocean, it lies between Africa and Asia and the connection to the ocean is in its south, through the Gulf of Aden and the Bab el Mandeb strait.

The etymology of the name

So why is the Red Sea called the Red Sea?  Well, ‘Red Sea’ is a direct translation of the Latin ‘Mare Rubrum’, the Greek ‘Erythra Thalassa’ and Arabic ‘Al Bahr Al-Ahmar’’. Geographers think it was so named because of the bright red-coloured flowers CyanobacteriaTrichodesmium Erythraeum that can be seen near the water's surface.

Some geologists suggest that it refers to the mineral-rich red mountains. Historians have pointed out that it borders the Egyptian Desert which the ancient Egyptians called ‘Dashret’ or ‘red land’.  It is also possible that the name derives from the Himyarite, a local clan whose own name means ‘red.’ 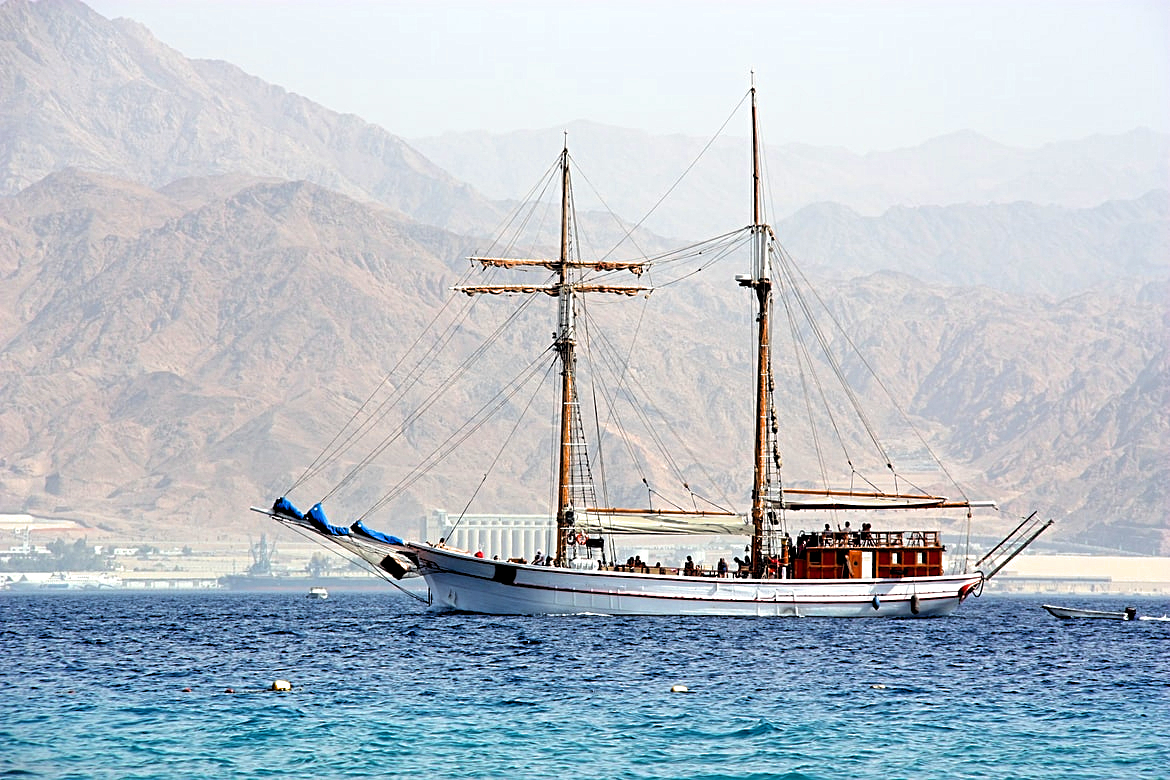 History of the Red Sea. Egyptians, Greeks, Romans and Israelites

It was the Ancient Egyptians who began the earliest known explorations of the Red Sea, whilst seeking commercial routes. One we know took place circa 2500 BCE and another 100 years later. In the book of Exodus, in the Hebrew Bible, the story is told of the journey the Jews made from Egypt to the Promised Land, fleeing slavery under a cruel Pharoah. Led by their leader, Moses, the Israelites miraculously crossed through a body of water called the ‘Yam Suph’ (in Hebrew this refers to the Red Sea), which parted before them.

According to the narrative, the Egyptians chased them but God wrecked their chariot wheels and the water then returned, drowning the entire army. As for where Moses parted the Red Sea and his people crossed it exactly? Today, most scholars and archaeologists think it was around the ‘Aqaba finger’ area. In the 8th century, the Persians made reconnaissance missions to the area and soon after Greek navigators did the same. The Romans favoured the area as a way of trading with India and the Red Sea also became an important stopover on the mediaeval Spice Route. 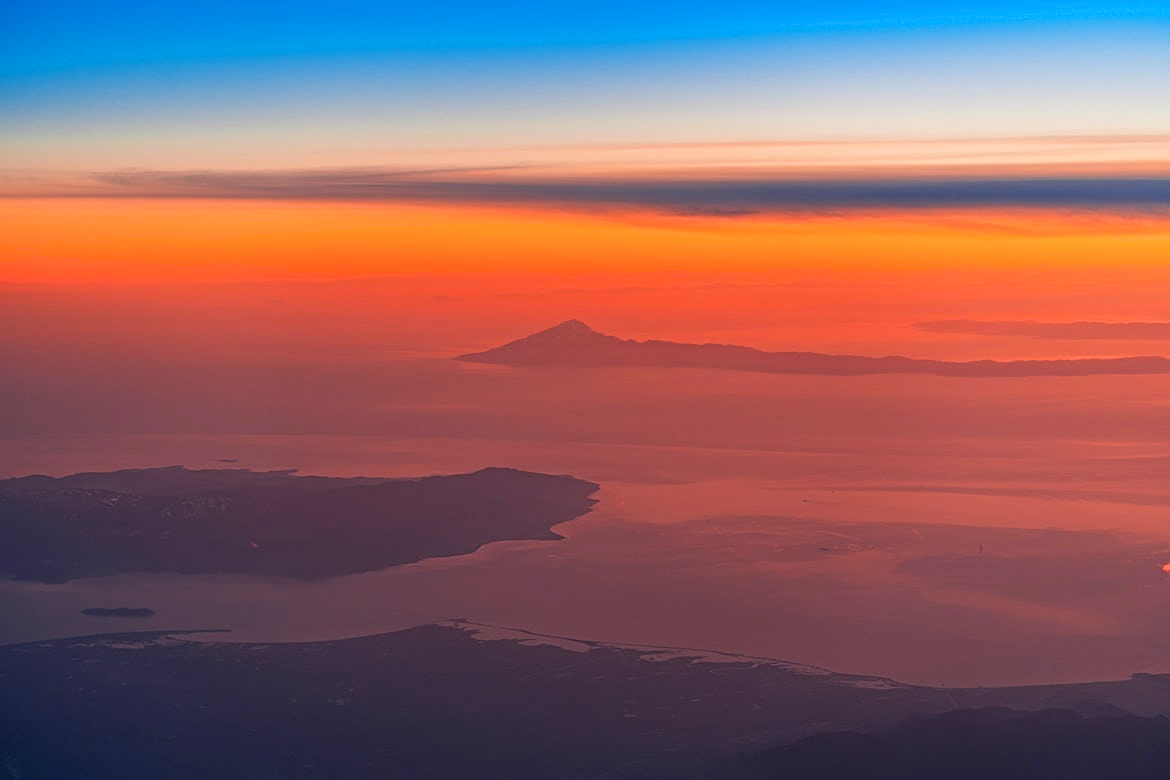 Sunset over the Red Sea. Photo by Eric Weber on Unsplash

In 1798, France, under the leadership of Napoleon, invaded Egypt and, in doing so, took control of the Red Sea. Napoleon failed in his conquest but one of the people who took part in the invasion - an engineer named Jean-Baptists Lepere - reinvented the plan for a canal.  The Pharaohs had built several in ancient times but none had stood the test of time. After the Suez Canal opened, in 1869, the French, Italians and British shared the port.

By the end of the Second World War, however, the Americans and Soviets became the dominant powers but after the Six-Day War in 1967, the canal was closed for eight years. Now, after many quiet years, the Red Sea is becoming an important trade port again - the Suez Canal links it to the Mediterranean and the Bab el Mandeb straits. This makes it an economic artery - more than 10% of seaborne cargo sails through its waters every year.

Bordering countries
Israel, Egypt and Jordan border the Red Sea on the northern shore, Saudi Arabia and Yemen border it on the eastern shore and Sudan, Egypt and Eritrea border it on the western shore.  This makes the Red Sea of huge strategic importance - it lies between the continents of Africa and Asia, separating the Middle East and the Far East as well as Asia and Europe. 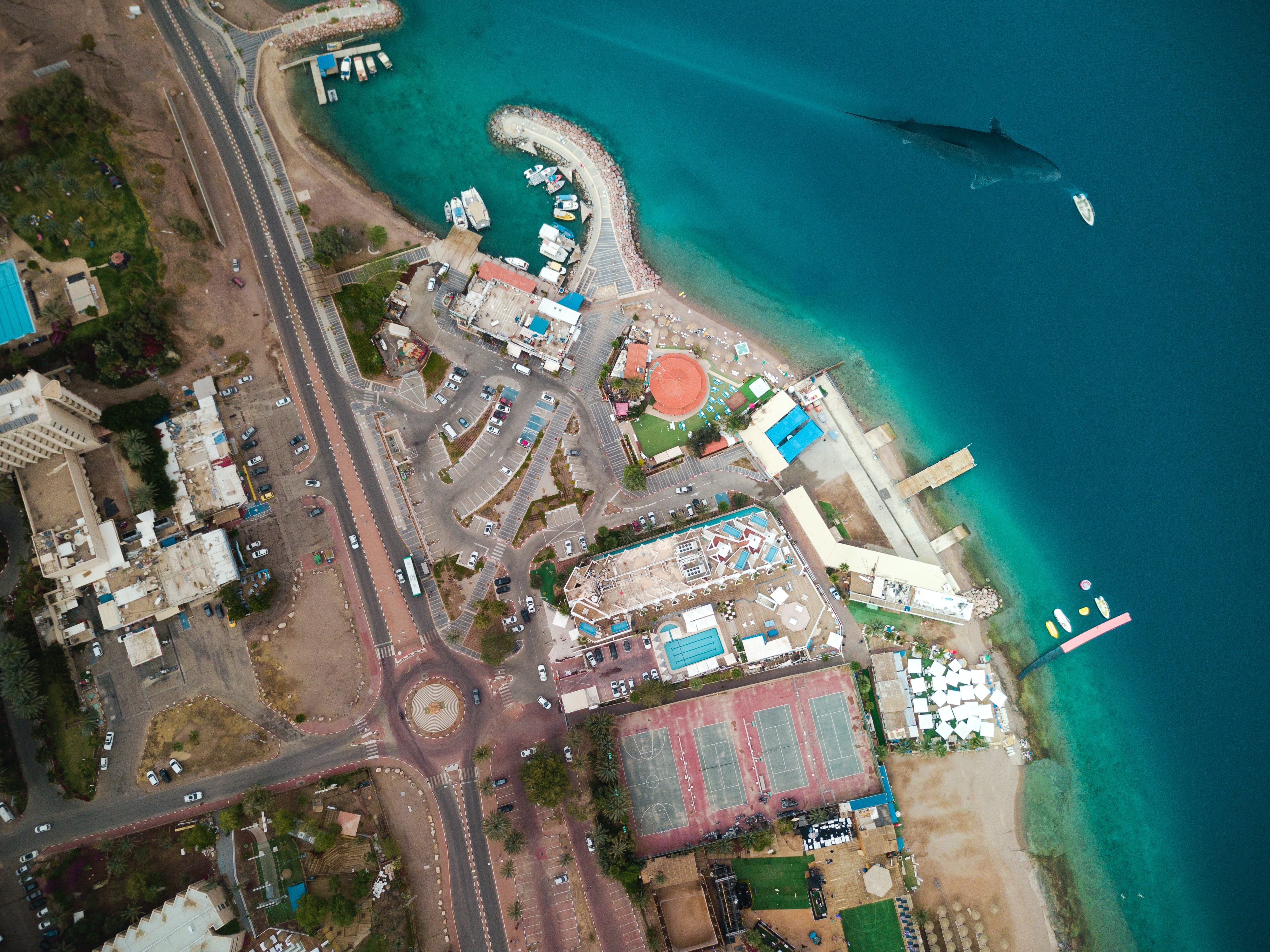 The aerial view of the harmless whale shark in the Red Sea, Eilat, Israel. Photo by Et Yan on Unsplash

Geology of the Red Sea

The Red Sea is part of an extensive rift system that includes from south to north the oceanic Sheba Ridge, the Gulf of Aden, the Afar region, the Red Sea, the Gulf of Aqaba, the Gulf of Suez, and the Cairo basalt province. The Red Sea valley cuts through the Arabian-Nubian Massif.  This was a continuous central mass of Precambrian igneous and metamorphic rocks that formed deep within the Earth under heat and pressure more than 540 million years ago.

Oceanography of the Red Sea

The climate of the Red Sea is the result of two very different seasons; a northeasterly monsoon and a southwesterly monsoon. The Red Sea is the world's most northern tropical sea and home to over 1200 species of fish and around 10% of these have been found nowhere else.  The many shallow shelves are also full of marine corals.

There are also extensive shallow shelves, all noted for their marine life and corals, Acropora being the most common kind (it grows fast - up to a metre long - if not disturbed).  There are no dangerous sharks (i.e. man-eaters) in the waters, but occasionally divers will see grey reef sharks. The world’s fastest fish also lives here - the sailfish can swim at speeds of up to 109 km (68 miles) per hour!

Tropical fish that can be seen in the Red Sea include the clownfish, butterflyfish, Spangled Emperor, parrotfish, lionfish.  Watch out for blue-spotted rays, giant Moray eels and barracuda, as well as turtles, the Titan Triggerfish and the long-nosed hawkfish. Fun fact:  the pretty red and orange coloured clownfish was the inspiration for Disney’s ‘ Finding Nemo’. They live amongst rare anemones and whilst their jaws are not large, they can be aggressive when trying to protect their young, inflicting a few small bites on the odd diver! 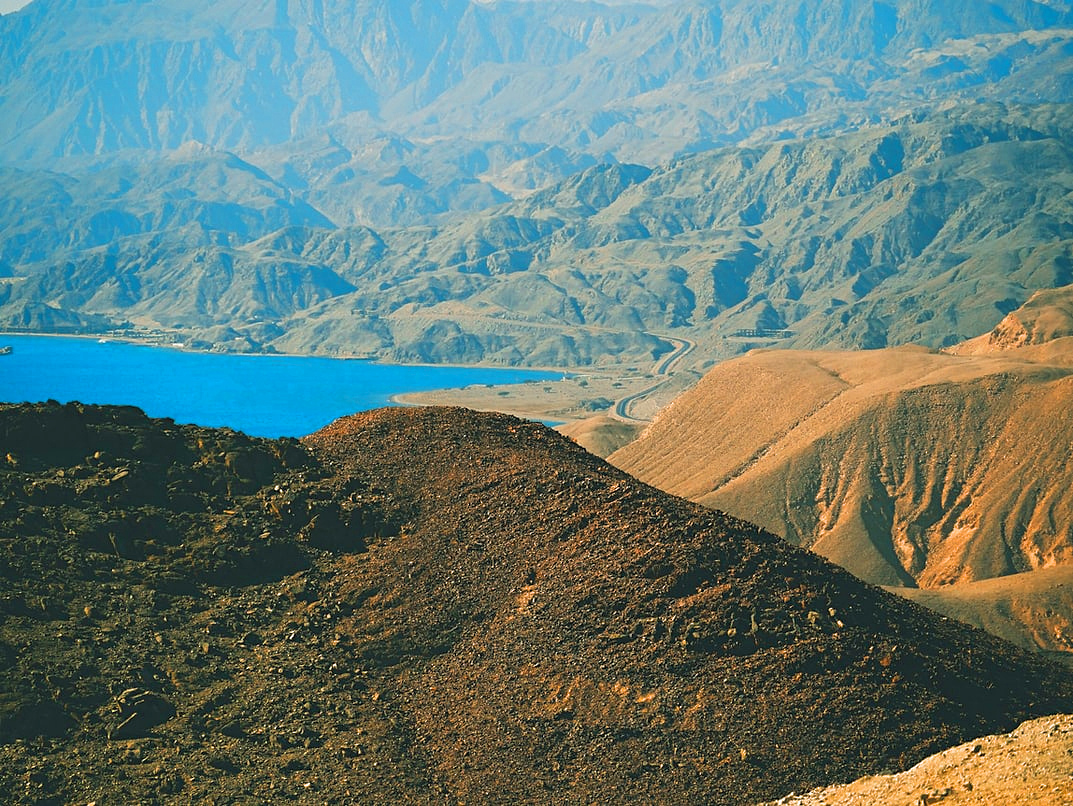 Hills in the Eilat area, the Red Sea coast, Israel. Photo by Josh Appel on Unsplash

Oilfields and mineral resources of the Red Sea

The Red Sea is quickly developing a reputation as one of the world’s largest offshore oil production areas.  Historically, there have been many challenges to drilling - it has a rough seafloor, topography, complicated geology under thick salt deposits and also a delicate ecosystem.  All this, as well as substantial drilling costs, meant that it was left untouched until recently.

The company Saudi Aramco was the first to use a deepwater rig in the Red Sea after a 2009 seismic study indicated the presence of natural gas.  In 2010, Sudan started drilling its first offshore exploration well, off their coastline. Canadian Oyster Oil and Gas Co. is now active in Djibouti, where there has been little exploration activity up to now.  And after Israel and the United Arab Emirates established ties as part of the Abraham Accords, a ‘pipeline deal’ was signed to bring crude oil from the UAE to Eilat.

The ecosystem of the Red Sea

The Red Sea has a delicate ecosystem and thriving biodiversity.  This is mainly due to the coral reef ecosystem.  It stretches for almost 2000 km (1,240 miles) along its coastline.  Some of the reefs are thousands of years old and in Egypt, some are protected by the government (such as Ras Mohammed National Park). Unfortunately, whilst Red Sea coral reefs are known for their incredible heat tolerance and resiliency, they are now becoming increasingly threatened as a result of origin seat temperatures and overfishing. 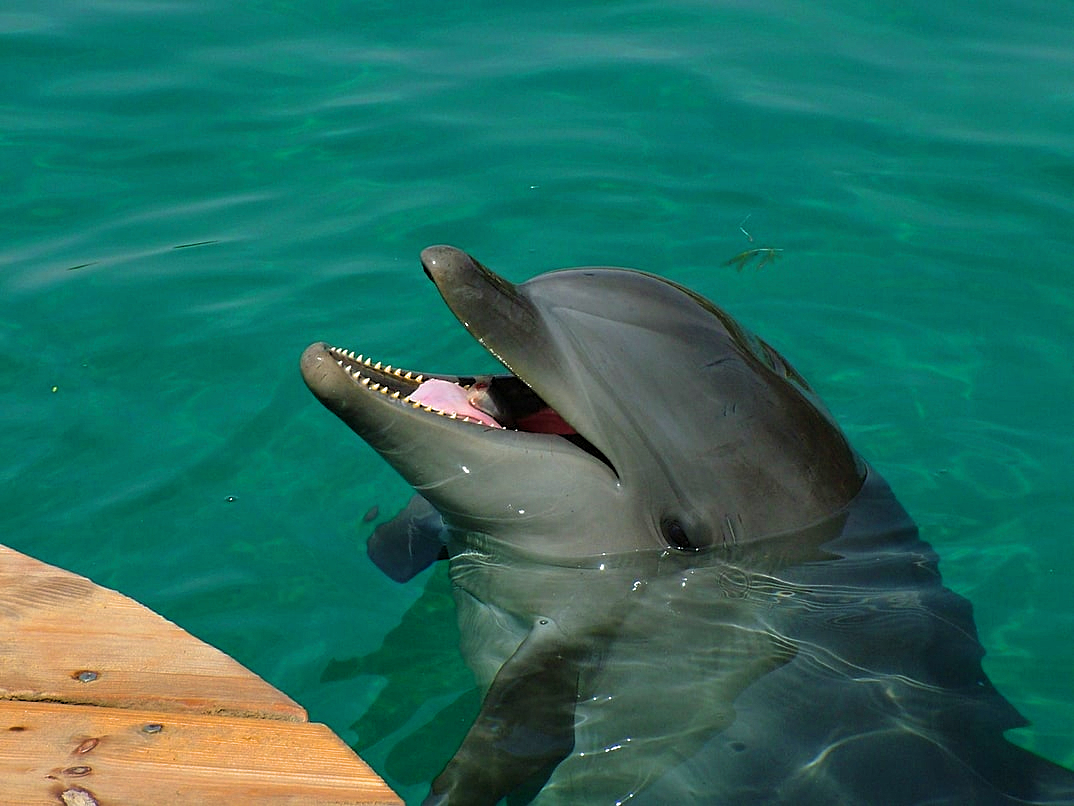 Around 40% of the Red Sea is very shallow - less than 100 metres (350 ft).  And 25% of it is less than 50 metres (164 ft) deep!  Another fun fact: the Red Sea is approximately 35% saltier than most other seas, which gives it unique health benefits (the saline concentration is thought to improve blood circulation).

Tourism is a thriving industry in the Red Sea with resorts like Eilat (Israel), Aqaba (Jordan) and Sharm El Sheikh (Egypt) all extremely popular, year-round. Sunshine is abundant, even in the winter, and it is quite possible to swim comfortably in the waters in January and February. It’s also easy to visit Petra from Eilat, as part of an organised tour - crossing the border from Eilat to Aqaba is not difficult and from there it is around two hours to the magnificent Nabatean city. 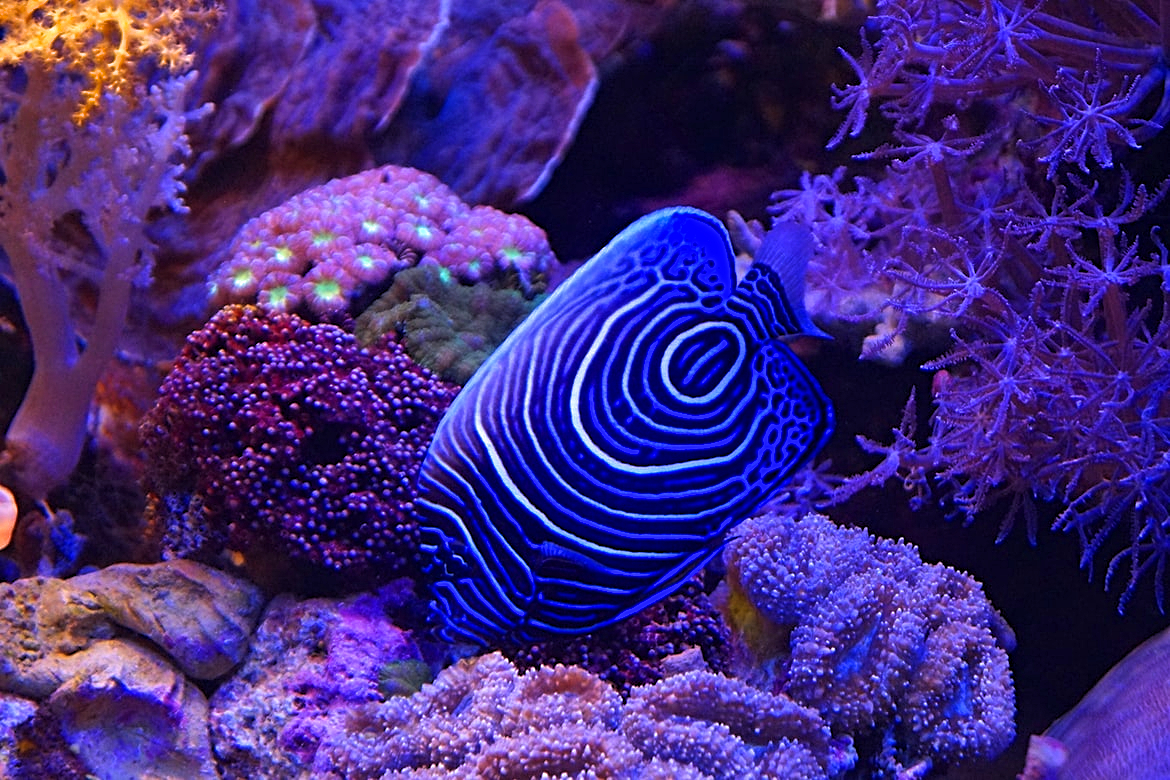 Things to do in Eilat

Eilat is a very popular destination for tourists, with the Red Sea a big draw for swimmers and snorkelers. Things to do in Eilat include boats with glass bottoms (you will see all kinds of colourful tropical fish), rent kayaks, as well as extreme water sports activities - jet skiing, water skiing, banana boats, tubing and parasailing. Not to mention Eilat Coral Beach and Dolphin Reef.

For divers, the Red Sea is a true paradise. In Eilat, the Red Sea diving resort, the diving territory is quite small and the sea drops off so close to the shore that in just a few minutes the water can be 20-40 metres deep.  Divers can explore the Nature Reserve (where the Moses Rock is located), as well as the Neptune Tables.  For those who love wrecks, there is a Satil, which is 45 metres long and lies about 25 metres deep. Surrounded by soft corals, it is very well preserved.

Egypt is also a popular Red Sea diving spot, with resorts like Dahab (famous for the Blue Lagoon) and Sharm el Sheik (40 km from the Thistlegorm - a British steamship sunk by German bombers in 1940 and today a popular dive wreck). 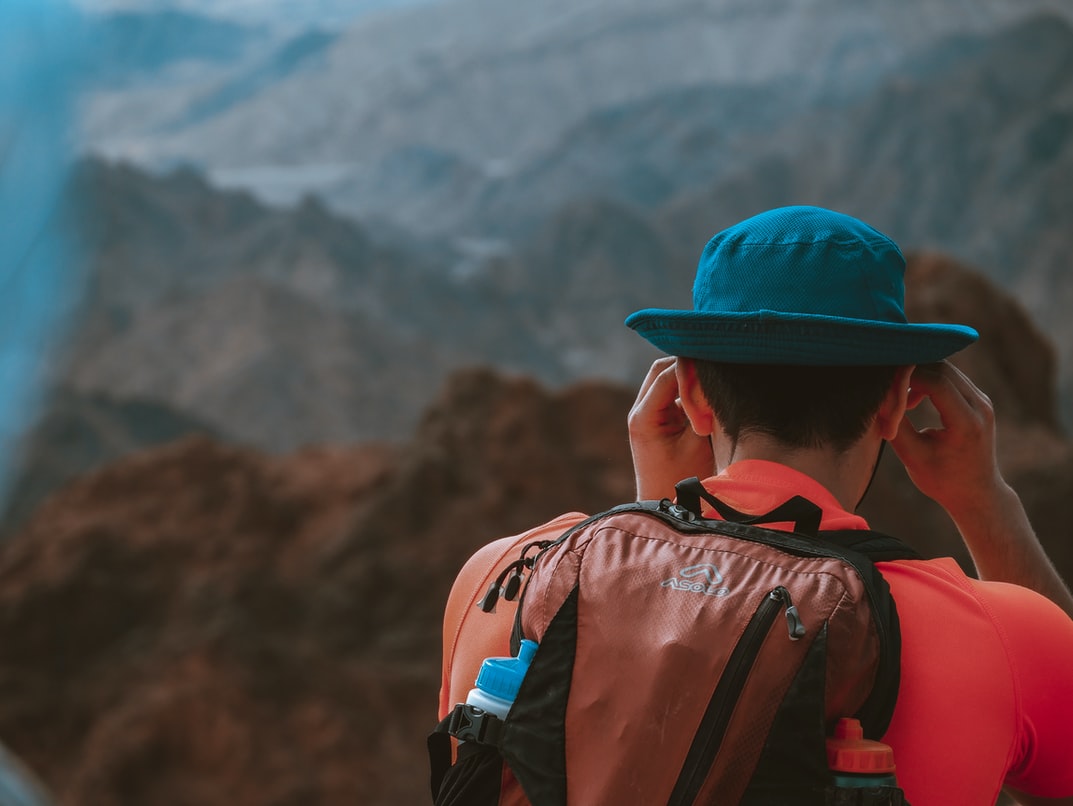 This really is a window onto the Red Sea where visitors can actually go underwater and see a reef without even getting wet! The Underwater Observatory was built in 1975 so visitors could learn more about the Red Sea in a new and innovative way.  There are no nets around the towers, so all of the marine life you see has come to the reef naturally!

Visitors can see sharks, manta rays, stingrays, all kinds of colour and amazing schools of the tropical fish way up close. There is also a brand new Aquadome and the opportunity to see animals being fed. The aquarium is open every day of the year, save for the Jewish Day of Atonement.

Along with CoralWorld, this is one of Eilat’s top attractions and an amazing and unique chance to get up close and personal with a group of bottlenose dolphins who choose, of their own free will, to make this Reef their home!  Set on the shores of the Red Sea, it is an ecological site unique to Israel - it has floating piers and observation points at which you can observe these magnificent creatures. The more adventurous visitor can also choose to snorkel or dive with the dolphins, and there are workshops that families love. The Reef also has a beautiful botanical garden and pond. 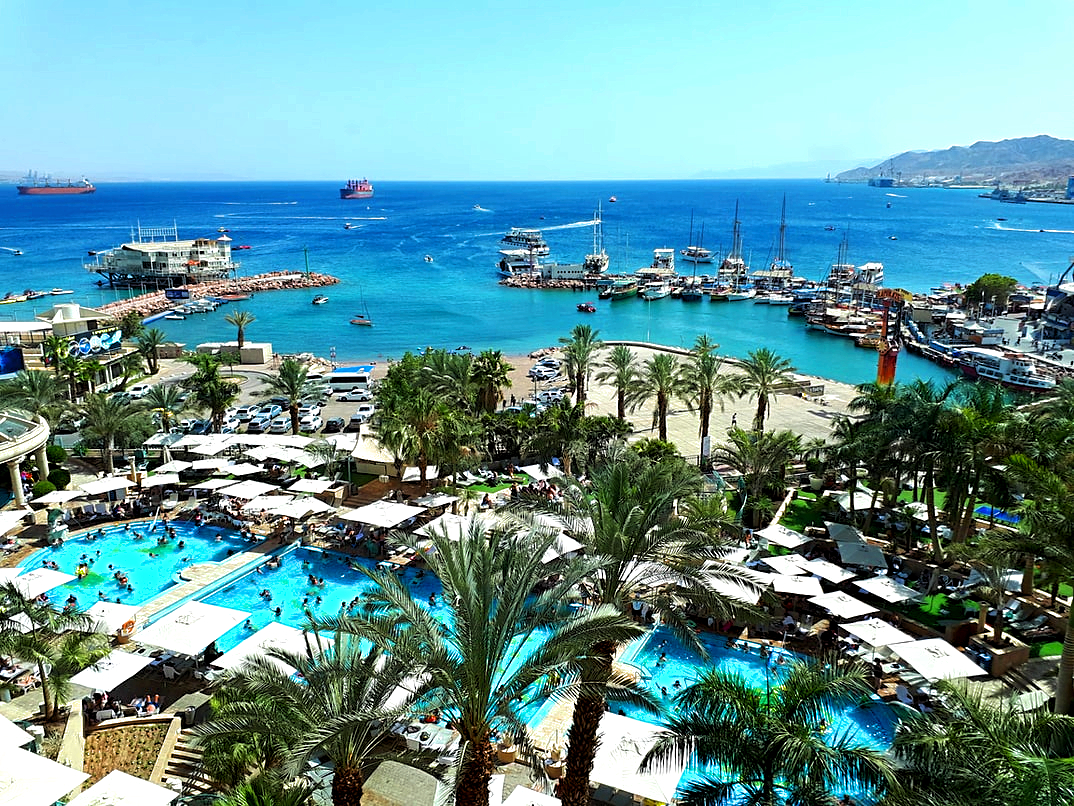 First held in 1987, the Red Sea Jazz Festival is an annual event, usually held in the last week of August. Running for four days, it hosts performances by accomplished jazz musicians, from Israel and also around the globe. There are workshops on offer and nightly jam sessions. Some of the artists who have performed in recent years include the Mingus Dynasty, Mory Kante, the Latin Groove Orchestra, Rick Margitza and Franck Ansalem. The festival draws audiences of up to 70,000 and has proved so popular that in 2010 a Winter festival now runs each year, for 3 days.

Eilat can be easily reached both from Tel Aviv and Jerusalem, either by Egged public buses or car rental (approx. 4 hours driving time from each city to the Red Sea). For more information, feel free to read the article How to get from Tel Aviv to Eilat. You can also spend a day in Eilat on your way to Petra with one of the numerous tours to Petra and Jordan.