For thousands of years people have sought solitude in the desert; a place of peace and contemplation. So it is understandable why throughout history religious sects have chosen to build their retreats and monasteries in remote desert or mountainous regions. St. George’s Monastery is the perfect example. 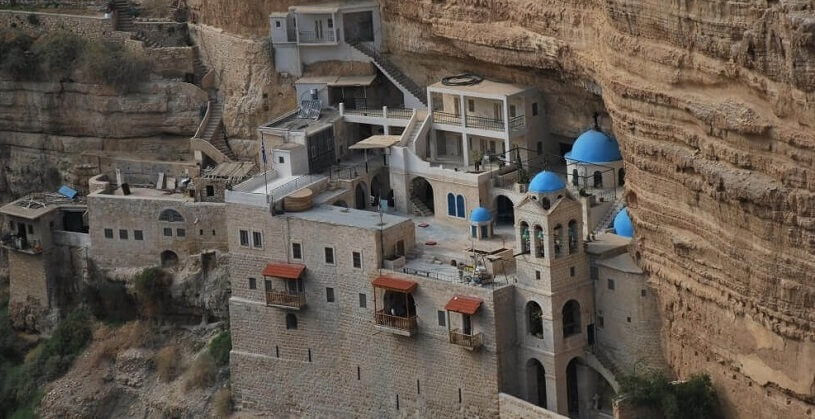 The location has religious significance as Wadi Qelt is thought to be the Biblical Valley of the Shadow (Psalm 23) and it lies parallel to the old Roman road to Jericho where the parable of the Good Samaritan was set (Luke 10:29-37). The monastery is thought to be close to the cave where Elijah was fed by ravens (Kings I 17:5-6). St. Joachim (Mary’s father) is said to have stopped in a cave nearby to grieve over the barrenness of his wife St. Anne. An angel came to him in the cave to tell him that they would soon have a child.

The monastery complex dates back to the 4th century when a small group of Syrian monks sought solitude in the wilderness as the Biblical prophets did. They settled here because of the various religious associations with the location and specifically the cave of Elijah. In 480AD an Egyptian called John of Thebes established a chapel which became the monastery and by the 6th century it was a well known spiritual center. The monastery is named after Saint George of Choziba a Cyprian monk who lived in the monastery during the 6th century. The monastery was a meeting point for hermits who lived in nearby caves. They would gather at the monastery for weekly mass and religious events. In 614 the monastery was destroyed by the Persians the monks were massacred. During the Crusader era (1179) there were attempts to restore the structure but it again fell into disuse until 1878 when a Greek monk, Kallinikos began restoring the monastery. He completed the task in 1901. In 1952 the bell tower was added with its distinct aquamarine dome and in 2010 access to the monastery was improved by the laying of a new road.The monastery is still inhabited by a small group of dedicated monks who live according to ancient traditions.

What is there to see?

On a trip to the monastery you should dress modestly and act with respect as it is still a place of worship. You will see a Greek flag flying as the remaining residents are Greek Orthodox monks. The monastery is a welcoming and inviting place; like an oasis in the desert the resident monks will make you feel at home. Unlike many monasteries female visitors are welcome thanks the precedent set by a Byzantine woman who arrived at the monastery wanting to be healed and claiming that the Virgin Mary had directed her there. Although much of the structure has been restored the chapel remains in its original form. The monastery is built on three levels with two churches within the complex – the Church of the Holy Virgin and the Church of St. George and St. John. Both churches are rich with religious paintings, icons and mosaics. The Church of the Holy Virgin has a magnificent Byzantine mosaic featuring a double-headed eagle in black, red and white. There are 12th century doors in the church’s iconostasis. The Church of St. John and St. George has a 6th century mosaic floor and in the reliquary there are the bones of the monks massacred by the Persians in 614AD and the tomb of St. George. The crypt also holds the remains of the original five Syrian hermits who established the monastery with John of Thebes. You can follow the stairs from the inner courtyard down to the Cave Church of St. Elijah. There is a basket on a rope which is used to hoist supplies up to the cave. The cave has a tunnel which acted as an escape route to the top of the mountain. There is a balcony on the inner courtyard where you can look down on Roman aqueducts on the other side of the valley.

How to Get to St. George’s Monastery

If you want to explore the Wadi on your visit to the monastery then follow highway #1 from Jerusalem and take left at Mitzpe Jericho then left again and left at the T-junction. Here you can stop for views of the Wadi and follow a path down to the valley bed to see the remains of the aqueduct bridge. About 450 meters further on is a wooden bridge which crossed Nahal Prat with the Ein Qelt pool on your left. From here you can hike west along the stream to a series of pools in Lower Nahal Prat or go east following the red trail for 2km until you get to the St. George Monastery. Alternatively the monastery is not far from the Jerusalem-Dead Sea highway and from there you can reach the monastery entrance gate. From the gate it is about a 15 minute walk to the buildings. The monastery welcomes guests from Monday to Saturday 9am to 1pm and is free to enter. It is safe to travel to the monastery but probably better to take an organized tour rather than traveling solo – just in case you get lost in the wilderness!