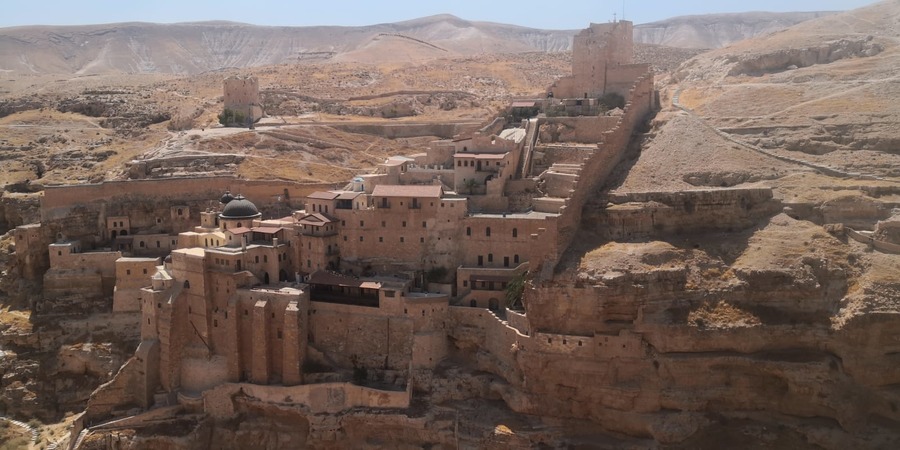 Nabi Musa is a site 11km south of Jericho, in the West Bank. It is believed to be the tomb of Moses. The biblical book of Deuteronomy recounts how before entering the Land of Canaan the Israelites camped in a valley opposite Beth-Peor, a city of Moab. Here Moses looked out across the Promised Land from Mt. Pisgah. “This is the valley where God Buried Moses” (Deut 34:6).

Moab is identified with the land running along the eastern shore of the Dead Sea, including the site of Nabi Musa. In Islamic tradition, Moses chooses the time of his death and asks Allah to let him die a stone’s throw from the Sacred Land. Although in both Judaism and Islam, Moses’ precise burial place is considered to be unknown, the shrine at Nabi Musa has become the traditional site of the Tomb of Moses.

History of the Tomb of Moses

The shrine has stood here since the 13th-century when Mamluk Sultan Baibars had it built. You can still see the date of construction inscribed on the shrine. Like many other Muslims, the Sultan passed this site on route to Mecca. This would have been the end of the pilgrims’ first day of walking as they made the annual hajj to Mecca.

Here they would have rested and worshiped at Moses’ tomb. Muslim pilgrims returning from their hajj continued to visit Nabi Musa into the Ottoman Era. At the site, pilgrims would be given food, supplies, and any necessary medical treatment. Although it is hard to authenticate that Nabi Musa is the authentic grave of Moses, it is the most popular site out of several that make similar claims. 2km south of the shrine is the traditional burial site of Moses’ shepherd, Hasan er-Rai.

Nabi Musa is also the name of a Palestinian Muslim celebration traditionally held on the Friday before Good Friday according to the Greek Orthodox calendar. The festival consists of a pilgrimage from Jerusalem to the shrine, three days of festivities, and a return journey to Jerusalem. During the Ottoman Era, the festival served as a religious counterbalance to the Christian Easter celebrations taking place at the same time in Jerusalem.

And as a political reminder of Muslim superiority in the region. Following riots that took place during the 1919 pilgrimage, the new Grand Mufti, al-Husseini began planning future Nabi Masa pilgrimages to realign with Palestinian Arab interests. Instead of being focused on religion, the events became a nationalist happening held across British-ruled Palestine.

Christian Palestinians would join Muslim Arabs in the annual Nabi Masa event to support the Palestinian national and political cause. In 1937 an Arab revolt in the Holy Land caused al-Husseini to go into exile, and the importance of the pilgrimage diminished.

The event was completely prohibited in 1951 when the West Bank was under Jordanian rule and King Abdullah  I of Jordan was assassinated by a Palestinian Arab. In 1967 Israel retook Jerusalem and parts of the West Bank, and in 1987 the Israelis authorized the pilgrimage to recommence. Soon after, the festival was once again prohibited due to the First Intifada. Since 1995 Nabi Masa has been under the Palestinian National Authority.