Also known just as Guvrin Park or “land of a thousand caves” this is a hidden gem and a must-see site for those looking for something unusual in Israel. Guvrin is located 13km from Kiryat Gat and has recently been listed as a UNESCO World Heritage Site. The Beit Guvrin National Park covers about 1,250 acres in the Judean Lowlands. 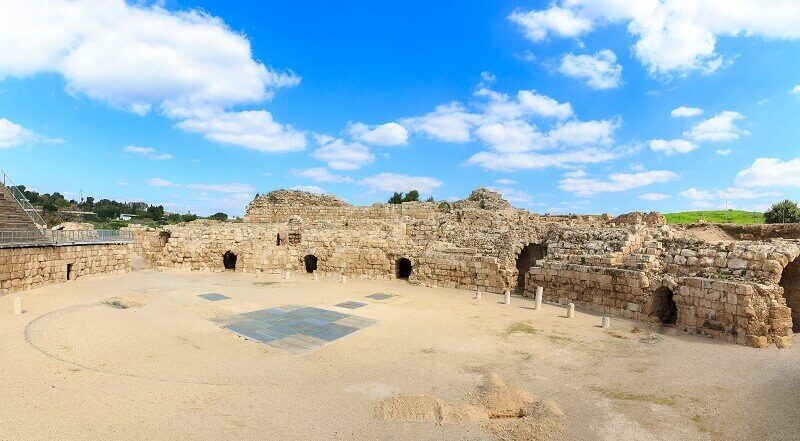 Beit Guvrin caveThe hills in this area are made mostly of chalk covered by hard rock (nari). Many cultures over the centuries have dug away at these rocks creating openings beneath the ground to use for a number of purposes. Once they got through the hard layer of rock it was simply a matter of hollowing out the chalk to create caves. Over the years a labyrinth of subterranean caves grew into a complex network. The park encompasses the ancient settlements of Maresha and Beit Guvrin. The First Temple Era (586BC) town of Maresha (mentioned in Joshua 15:44) stood on this site which was then settled by Edomites followed by Sidonians and then Greeks. Maresha became a Hellenistic city and at the time many of the caves were created. The Jewish Hasmonean King John Hycanus I conquered the city in 113BC and by 40BC Maresha had been destroyed by the Parthian invaders.
Beit Guvrin became the primary settlement in the area, as we learn from the writings of Roman historian Josephus Flavius. The city continued to thrive as a Roman ruled Jewish city until the destruction of the Second Temple (70AD) and the Bar-Kochva Revolt (132-35AD). Under the Roman Emperor Septimus Severus the city became Eleutheropolis and was declared a “city of freemen” and became a municipality. The Byzantine period saw Christian churches built in Beit Guvrin and under the following Muslim rule most of the caves were created. During the Crusader period the Byzantine St. Anne’s Church was rebuilt (1136AD). Each of these civilizations has left their mark. The site can be visited at any time of the year although in the spring you can see the blossoming wild flowers. Expect to spend about 1.5-2 hours here. The park is open April to September 08:00-17:00 and October to March 08:00-16:00. Entrance is 29ILS for adults and 15ILS for kids. The trail and picnic areas are wheelchair accessible. For more details check-out the Israel Nature and Parks Authority website.

Highlights of a visit to Beit Guvrin National Park

Firstly the beautiful open countryside of the Judean Lowlands offer an opportunity to get out into open air and do some hiking or biking. In addition you have the amazing archaeological findings which include a Byzantine church, subterranean cisterns, mosaics and public baths.
Columbarium – This breathtaking underground room from 200BC spans 30 meters. On the walls are almost 2,000 niches which were used to house the pigeons which were used for food, sending messages and their droppings were used for fertilizer.
Maze Cave – 30 interconnecting caves which visitors can walk through.
Greek Sidonian Burial Caves – Dating back to the 3rd century BC the caves were Hellenistic family tombs and are decorated with wall paintings of mythological creatures, hunting scenes and cultural elements.
The Bell Caves – There are about 800 bell-shaped caves beneath the surface in Guvrin Park although many more have yet to be uncovered. They date back to the 4th to 9th century. The extracted chalk would have been used for building and road making. The most spectacular is 5 meters high with a large opening in the ceiling which lets light pour in, this hole would have been used to extract the chalk. Today the Bell Cave is used for special events and classical musical performances.
Roman Amphitheatre – One of only four Roman amphitheatres in Israel, it could once seat 3,500 spectators.
St. Anne’s Church – the Byzantine Era church was rebuilt by the Crusaders in the 1100s. An elegant semi-circular stone dome remains.