Beit Guvrin (or Bayt Jibrin) is one of the most surprising places to visit in Israel as all of its wonders lie below ground! Beit Guvrin or should I say Beit Guvrin-Maresha National Park is located near Kibbutz Guvrin off the Beit Shemesh-Kiryat Gat road in the Judean lowlands; the “land of a thousand caves.” The national park encompasses ancient archaeological remains of the Roman town of Maresha; the remains of the 1st-century town of Beit Guvrin; a Roman amphitheater; the remains of a Crusader fortress and countless caves.

The Ancient Caves of Beit Guvrin

The ancient inhabitants dug caves in the limestone rock not only to quarry the chalk but also to use the caves as water cisterns, storage space, dovecotes, tombs and to keep livestock. Highlights of the national park include the Sidonian Burial Caves, where the leading families of the Beit Guvrin Sidonian, Edomite and Greek communities were buried. These caves are the only ones here that are decorated with frescoes. You can see the burial niches in the rock and the intricate paintings of mythical figures, animals, and plants. There is a burial cave where musicians were buried and this one is painted with musical motifs.

Beit Guvrin became the primary settlement in the area, as we learn from the writings of the Roman historian Josephus Flavius. The city continued to thrive as a Roman-ruled Jewish city until the destruction of the Second Temple (70 AD) and the Bar-Kochva Revolt (132-35 AD). Under the Roman Emperor Septimus Severus, the city became Eleutheropolis and was declared a “city of freemen” and became a municipality. The Byzantine period saw Christian churches built in Beit Guvrin and under the following Muslim rule, most of the caves were created. During the Crusader period, the Byzantine St. Anne’s Church was rebuilt (1136 AD).

Among the many caves in the area, there are about 800 bell caves. Bell caves are, as the name implies, shaped like bells with an opening in the ceiling. Many of these caves are connected by passageways and some were used as columbariums where small niches have been carved into the walls for pigeons. The bell caves were carved out of the soft limestone during the Arabian period and the chalk dug from the caves was used for laying roads.

Some of these bell caves are enormous, reaching heights of 18 meters. Today some of these beautiful, spacious, and cool caves are used as concert venues. Other caves not to miss are the Polish Cave, a Hellenistic Period cistern; the Oil Press Cave, one of 22 underground oil presses from the biblical period; the Bathtub Cave used for washing or ritualistic bathing; a partially reconstructed home from c.113 BC and the Maze Caves of underground dwellings.

We will visit the Bell Cave, which is a hard-surfaced rock quarried downward in the shape of the bell. We also see here rock inscriptions from the early Arab era from the seventh to the tenth era. We continue to the Sidon Cave (a series of impressive burial caves with rock paintings, that throw light on the lifestyle and artistic craft styles of the Hellenistic period. Continue to the Roman Theater where gladiator fights took place in the sand arena.

There are several routes through the park which can be followed by bike and in some places by car. Visitors to the park can take a map and follow the hike paths through beautiful countryside from site to site seeing the ancient remains and exploring the caves. Each of the caves has been made easily accessible with stairs and handrails.

You can have an amazing day out at Beit Guvrin exploring both beneath the ground and the flora and fauna above ground.  Expect to spend about 1.5 - 2 hours here. There are facilities like toilets, a kiosk, and picnic areas. For more information please check out the Israel Nature and Parks Authority website or call 08-6811020. 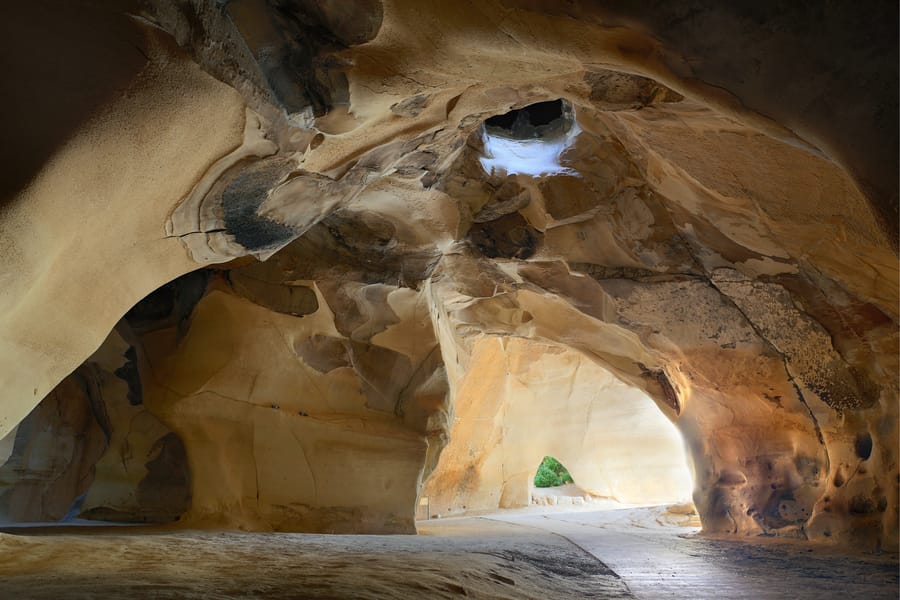