With so many great civilizations leaving their mark on Israel it is sometimes difficult to keep track of the chronology of historical events. Archaeological findings in Israel often reveal multiple layers remaining from different historical periods. When you visit Caesarea the expanse of the excavations can be overwhelming so here is a brief overview of Caesarea’s history and the evidence we can see on a visit to the Caesarea Archeological Park. 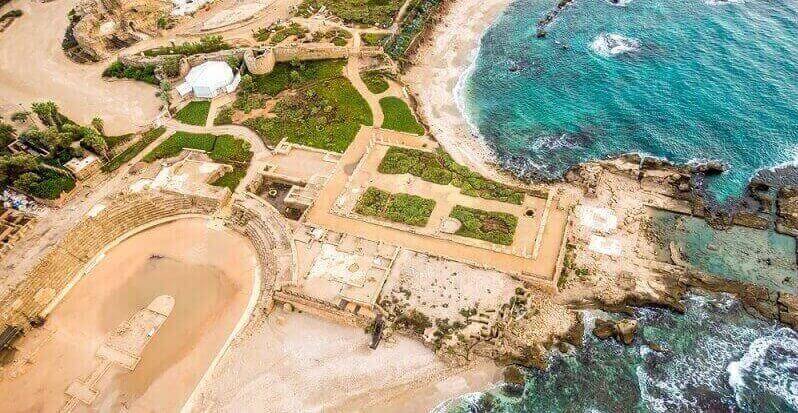 The site was first settled in the 4th century BC as a Phoenician port city called Straton’s Tower.

In 90BC King Alexander Yannai captured the city for the Hasmonean Kingdom. After being under Cleopatra for a short time and an autonomous city under Pompey, Caesarea was given to Augustus Caesar. 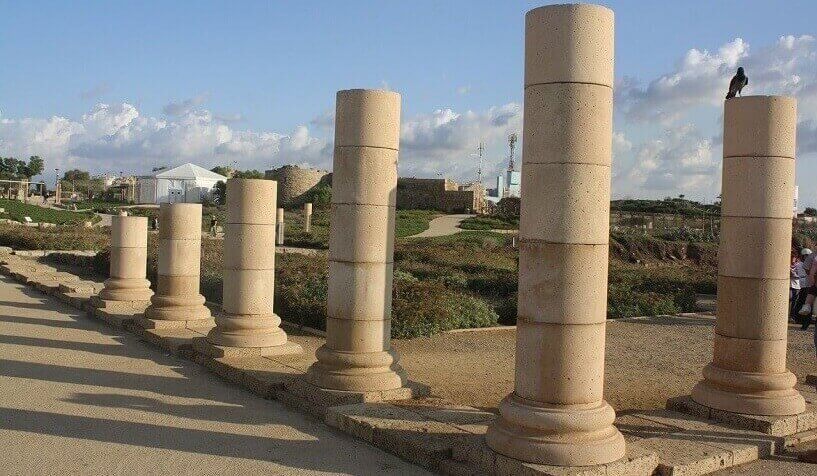 Polls in Cesaria In 63BC the Roman city was ruled by King Herod who instigated major construction and development in the city from. Most of what you can see today on a visit to Caesarea’s archaeological park came from this period. Herod had a double harbor constructed, Sebastos. The breakwaters can still be seen in aerial shots 5 meters below sea level, it was the largest port on the eastern Mediterranean coast. A walk through the archeological park will take you into the remains of Roman baths; a temple facing the harbor, warehouses, and public buildings. In the southern part of the city Herod’s luxurious palace was constructed on a 110 X 60 meter plot. The Roman amphitheatre is now a functioning performance venue. Here a plaque was found with an inscription referring to Emperor Tiberius and Pontius Pilate, Governor of Judea. The grand hippodrome could hold 20,000 spectators and horse and chariot races were held here every 5 years under the Roman rule. In 6AD the city became the seat of the Roman Procurators of Judea. The Herodian aqueduct can still be seen today, it carried fresh water from a spring 9km to the north. Expert engineering insured that the construction and use of natural gravity kept the water flowing. Some sections of the aqueduct were supported on a row of raised stone arches which can still be seen along the coast.
66AD-70AD the Great Revolt occurred, when the uprising was crushed the Romans continued ruling Palestine. In 325AD the Roman Empire was Christianized under Emperor Constantine. Caesarea was also home to Jews under Roman rule and the remains of a 5th century synagogue were found near the harbor.  During the Byzantine Period a church was built on the remains of the Roman temple.

In 640AD the city fell to the Muslims and Caesarea was left neglected.

1101AD when the Crusaders, led by Baldwin I captured the city the city’s walls were fortified and a fortress constructed. For a year (1251-52) Louis IX spent time in the city helping (with his bare hands) to reconstruct the city walls and moat.

In 1265 the Mamluks Sultan Baybars captured and destroyed the city leaving it in disrepair for 619 years until in 1884 it was once again re-inhabited.

1884 to Present and State of Israel

This time by a group of refugee Muslims from Bosnia, who formed a small fishing village here. In 1948 the city was once again abandoned. After the establishment of the new State of Israel in 1949 the surrounding areas were gradually settled and eventually excavation of Caesarea was begun.