The Mount of Temptation rises up out of the Judean Desert 3km northwestern of Jericho in the West Bank not far from the Dead Sea. At the foot of the mount palm trees and lush vegetation grow and the yellow and orange-hued mountain slopes rise 360 meters above sea level. The Mount of Temptation (Jabel Quruntul or Mount Quarantania) is famed as the site where the devil tempted Jesus to forsake God.

The Mount of Temptation in the Bible

In Matthew 4:8 we read how Jesus was baptized by John the Baptist and then went into the wilderness where he fasted and meditated for 40 days and 40 nights on the Mt. of Temptation. While here the devil tried to tempt Jesus three times to forsake God. The first temptation was when Jesus was hungry and the devil offered to create bread from stones. Jesus rejected the devil and instead angels fed him.

For the second temptation, the devil told Jesus to test God by throwing himself off the highest point of the mount and Jesus replied that it is forbidden to put the Lord God to the test. For the third temptation, the devil looked out across the land and offered Jesus the kingdoms of the world if he would bow down to Satan. Jesus refused and instead told the devil to get out of his sight. The mount is also mentioned in Mark (1:12-13) and Luke (4:1-13). Due to the mount’s Biblical association, it has attracted Christian pilgrims for centuries.

The mount offers isolation perfect for meditation and contemplation yet it has a precious water source despite being in the desert. In the slopes of the mount are about 30 caves where monks and hermits would once have lived. They would come here to be close to the place where the Biblical event took place. A Greek Orthodox monastery was built on the mount in the Byzantine-era, 4th-6th century then the site was abandoned for about 500 years until the Crusaders arrived in 1099 and built two churches on the mount. The present monastery was constructed here in 1875 and encompasses the two earlier churches.

Visiting the Mount of Temptation

Visitors to the mount can take the cable car from Tel Jericho to the summit or hike up the mount which will take about half an hour. A visit to the Mount of Temptation is often combined with a visit to Jericho or the Dead Sea because of their proximity. The Greek Orthodox monastery was built into the side of one of the mount’s steep slopes so that it appears to be clinging miraculously to the side of the mount.

The monastery encompasses a cave chapel that has survived from an earlier monastery and is said to be the site of the first temptation. At the south side of the monastery complex is a chapel built around the stone where Jesus sat during his spiritual contemplation. This is said to be where the third temptation took place. On the hillside above the monastery are the remains of a fortress originally built by the Greek Seleucid's (312 BC - 63 BC) and later inhabited by the Hasmoneans (140 BC - 116 BC).

Here Simon Maccabeus was murdered in 135 BC by his son-in-law. Simon was one of the Hasmoneans who led the revolt against the Seleucid rulers gaining a form of independence for the Jewish Hasmoneans in Judea. On top of the Hasmonean ruins stands a later wall built by the Greek Orthodox Church in the hope of establishing a second monastery on the mount.

Want to see from the top of mount of Temptation? join our Jericho, Dead Sea and the Jordan River Tour. 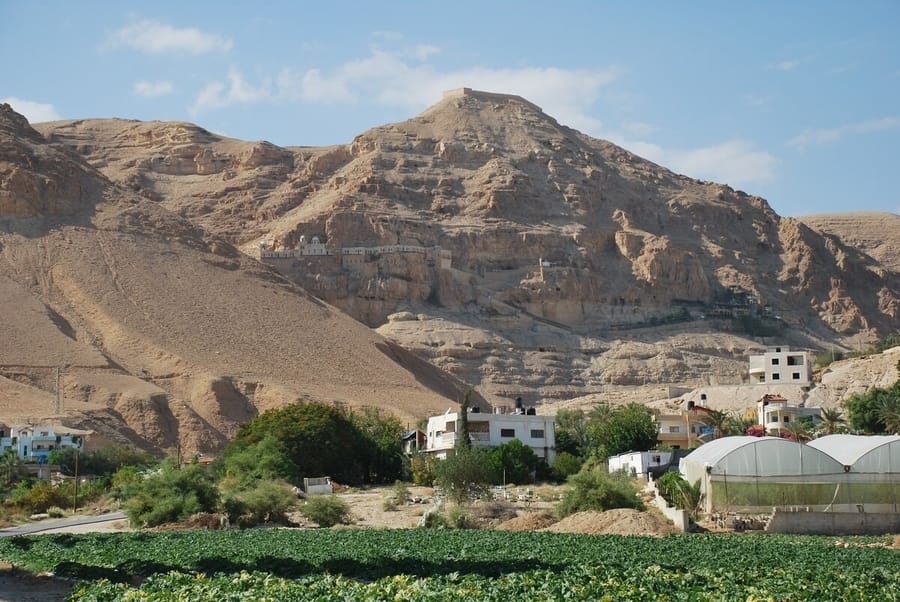