Elisha’s Spring (also called the Prophet’s Fountain and Elisha’s Fountain) is a freshwater spring near the archaeological mound of Tel Jericho where remains of settlements were found dating back to about 8,000 BC.

The people who settled here so long ago would have done so to take advantage of the freshwater which is such a scarcity in the harsh desert environment just north of the Dead Sea. Elisha’s Spring makes Jericho an oasis or City of Palms in otherwise dry surroundings. The perennial spring continues to produce plenty of water which has a temperature of 26°C.

Elisha is a venerated prophet in Islam, Judaism and Christianity and for this reason, the spring is also called the Prophet’s Fountain. Elisha is mentioned in Kings II 2:19-22 when the people of Jericho came to Elisha and told him that the city had a good location near water but it was not good water and could not irrigate the land. Elisha called for a jar of salt which he then threw into the water saying that the water was healed and would never again cause death or unfruitful land. From that point on the water was pure.

Today Elisha’s Spring lies across the road just east of Tel Jericho (Tel es-Sultan) and about 2km northwest of the modern city of Jericho. Visitors to Jericho can stand overlooking the spring where it exits the ground near the red-roofed pumping house and look down on the water teeming with fish.

The pumping station provides Jericho with water and small waterways are redirected to fields for irrigation. Another viewing point of Elisha’s Spring is at the site of a pond and fountain fed by the spring under the shade of a fig tree. A beautifully tiled sign behind the spring reads:” Jericho – the Oldest City of the World” and “Elisha Spring Fountain.”

To visit Elisha's Spring in Tel Jericho join a tour to Bethlehem and Jericho. 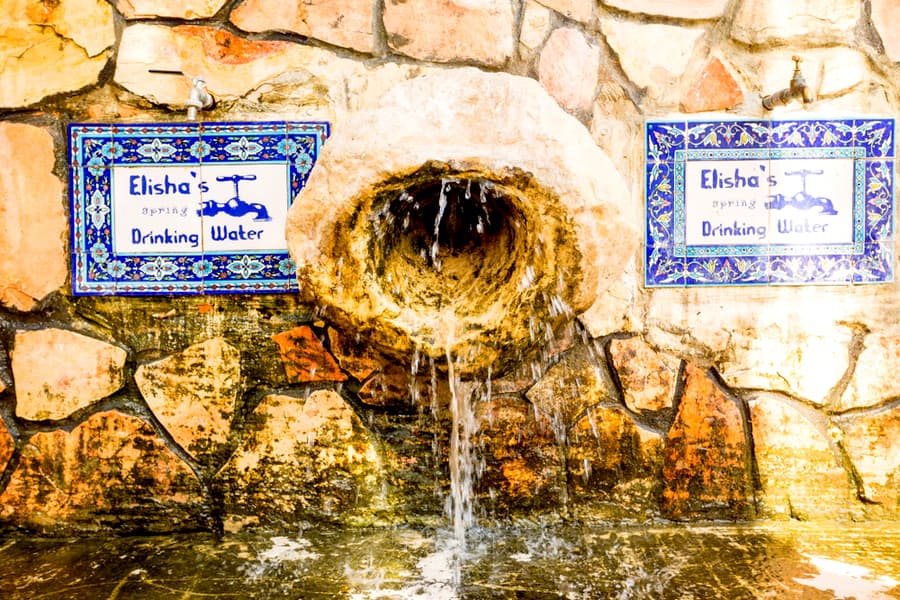