The Roman Theater in the Jordan capital of Amman was carved into Jabal Al-Jofeh on the northern side of the hill in 138-161 BC. Today it is one of the top attractions of Amman and a popular performance venue; This is a great place to get your fill on History, Archeology, and culture.

The magnificent theater was constructed when Amman was part of the Roman Empire, during the reign of Emperor Antoninus Pius. He was a big fan of the arts and encouraged the construction of theaters, and cultural centers.  At the time the city was called Philadelphia, after the Ptolemaic ruler, Philadelphus. Construction took place between 138AD and 161AD, and the theater became the central attraction of the city.

In 1957 work began on restoring the ancient structure. Although the restoration was not done with the original materials, it still looks like it did 2000 years ago. And today the theater is used for performances, concerts, and special events.

What to See and Do at the Amman Roman Theater

Amman’s Roman theater has the classic design of Roman theaters with a stage; an Orchestra (the ground-level open area between the stage and seats); a Cavea (the audience seating area), and the Scaenae (a decorative, permanently built stone background to the stage). Pro Tip: Get the best photos of the Roman theater in the morning and the best views of the city from the top tier of the seats before sunset.

The Roman Theater in Amman could accommodate 6,000 people in the audience, sitting on the steep tiered steps. You might notice that the theater was built facing north. This was so that the audience would not have the sun in their eyes when watching performances. There are a total of 44 rows in the cavea. 2,000 years ago the audience would have been divided by social rank with the rich and powerful sitting near the front, and the poor, slaves, women, and foreigners sitting in the upper section.

On either side of the Roman structure are two small heritage museums, the Museum of Popular Traditions and The Folklore Museum. If you want to see statues that once adorned the theater, visit the Jordan Museum in the city.

A public square (Roman Forum) once stood in front of the theater. It was added by Emperor Commodus. At the time this would have been one of the largest forums in the Roman Empire, measuring 100m by 50m. What remains today are a few of the columns that stood around the square and some Roman paving stones.

Just east of the large Roman Theater, you can see a smaller Roman performance venue called the Odeon, which could seat 500 spectators. At the same site is the Nymphaeum, an ornate fountain built in 191AD and dedicated to the water nymphs. 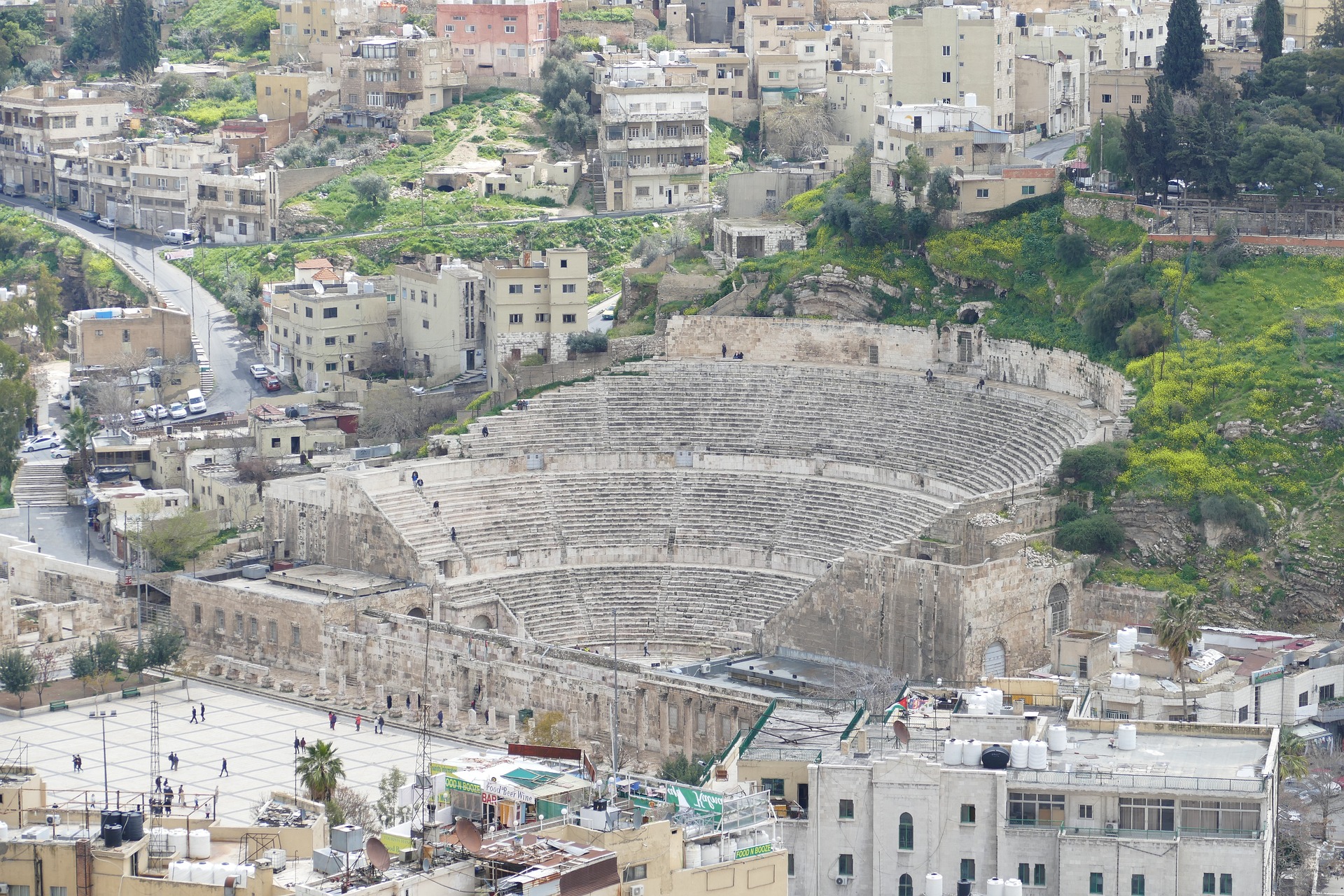