Yom Kippur is a festival that comes around, annually in Israel every September/October, depending on the Jewish calendar.  And it is a festival like no other. Why? Well, because most biblical festivals for Jews are connected either to historical events or agriculture/nature. 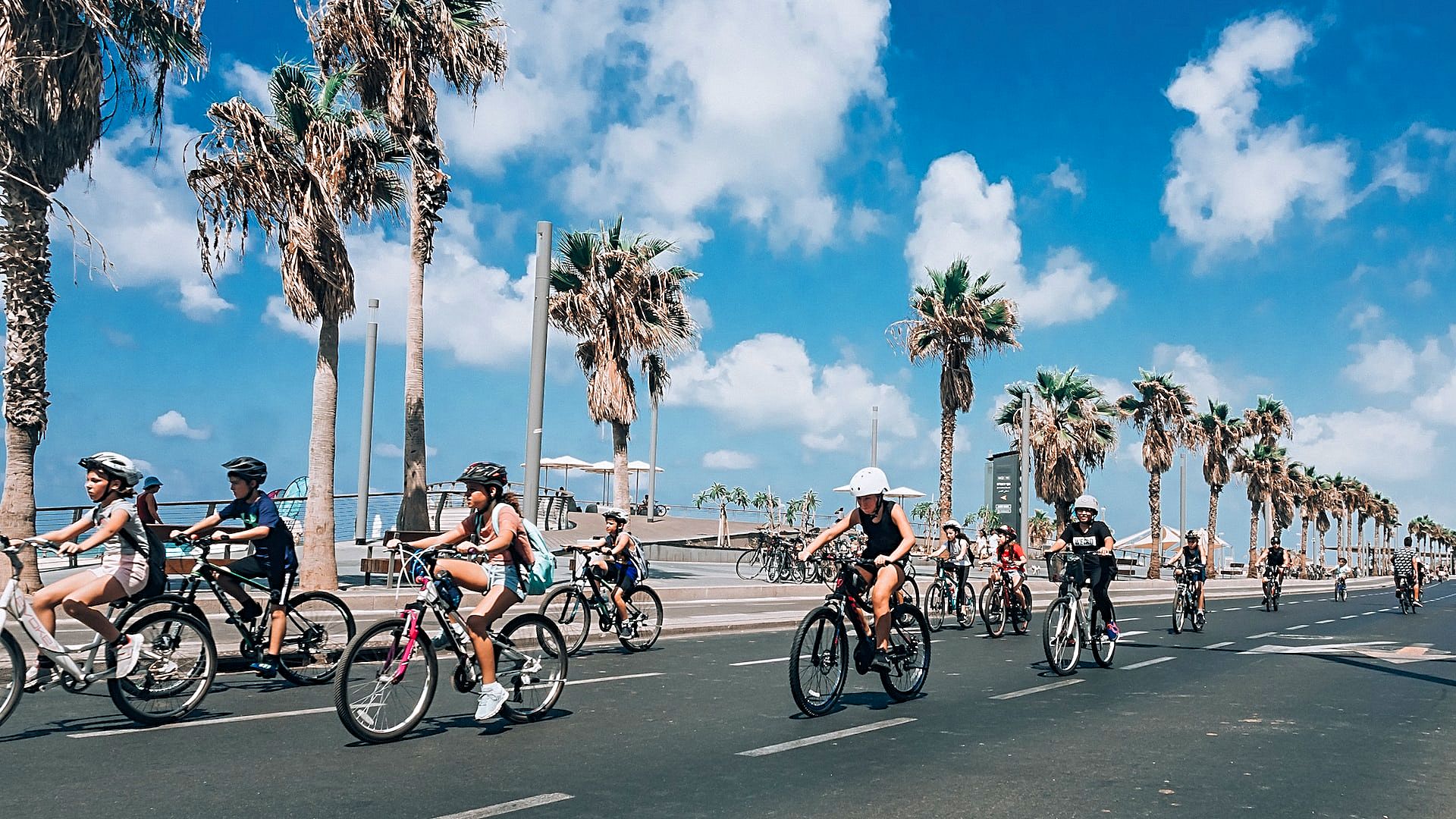 Passover commemorates the Israelites fleeing slavery in Egypt. Shavuot is a harvest festival and Sukkot reminds us of all the years Jews wandered in the desert, before making it to the Promised Land. But Yom Kippur is about neither of these. Nor does a festive meal take place during this time.

On the contrary, it is a time to engage in abstinence, denying themselves small pleasures and looking inside their souls. This day represents the antithesis of excess. Without a doubt, if you ask any Israeli what the holiest day in the year is they will answer ‘Yom Kippur.’  And even if you are not religious, this is a day of calm and quiet in Israel that really is appreciated by many! Curious about what it’s all about? Well, learn a little more here…

What does the name Yom Kippur mean in Hebrew?  What kind of day is it?

The Hebrew phrase stands for ‘Day of Atonement’. Put simply, Yom Kippur is the most solemn day of the Jewish Year. It is a day of reflection, self-examination, and atonement for sins. It is a time for every Jew to stop and think about things that usually pass them by in daily life. What is the meaning behind this day?

Yom Kippur falls ten days after Rosh Hashanah - the Jewish New Year - and these ten days are often referred to as the ‘Days of Awe’. According to Jewish tradition, it is on these days that God decides the fate of each person - on Rosh Hashanah, Jews are inscribed into the ‘Book of Life’ and on Yom Kippur, our destinies are sealed. 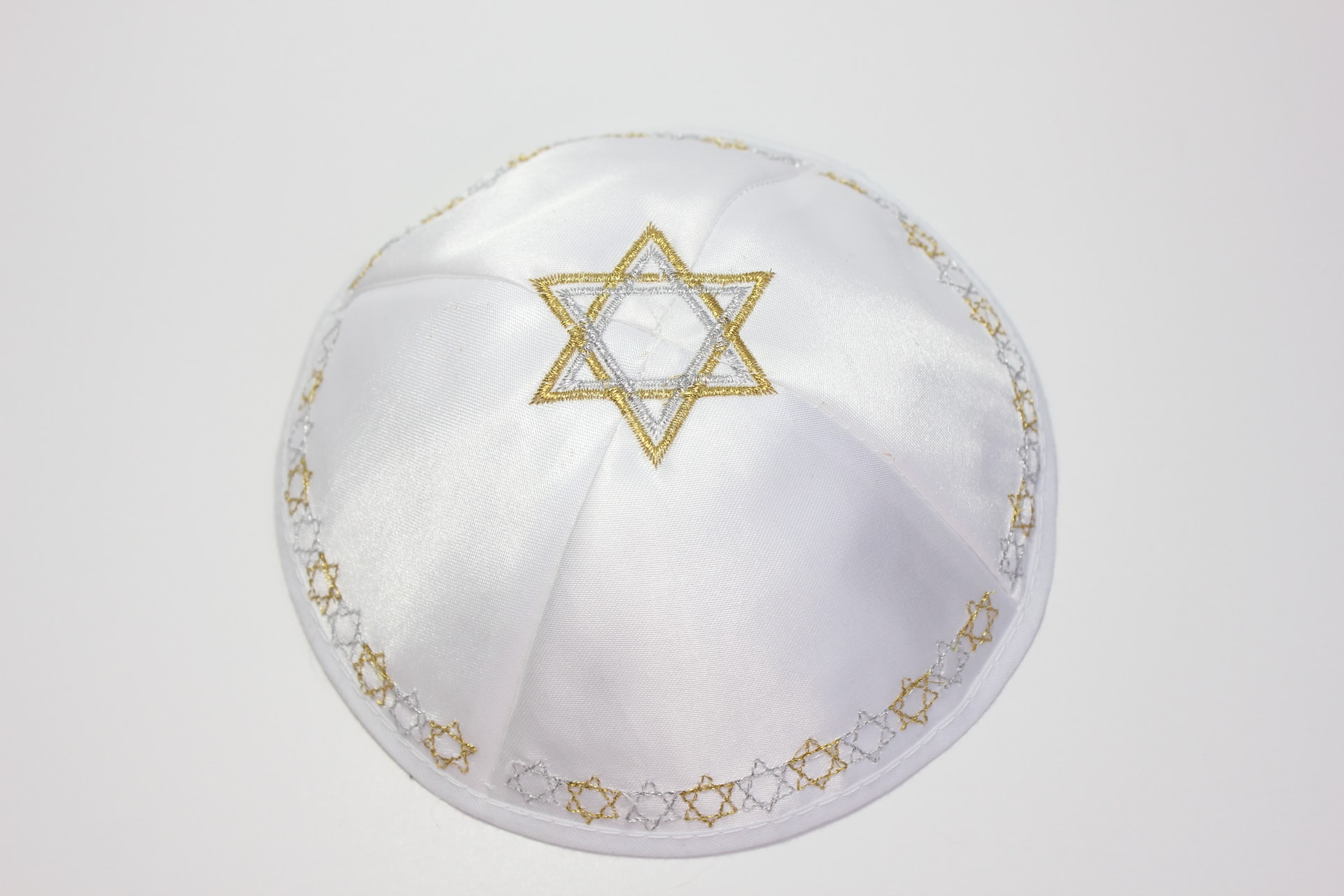 Why do Jews fast on Yom Kippur?

Not eating or drinking is one of the five major prohibitions of Kippur - the other four being anointing the body with oil, bathing, sexual relations, and the wearing of leather shoes. This is all to do with the idea of denying oneself comforts - and aiming to be like an angel (because angels do not have worldly needs).

Yom Kippur this year takes place from nightfall to nightfall on Tuesday 4th October until Wednesday 5th October. The approximate times for the beginning and end of this holy day are 18.17 to 19.16 in Israel.

What should you say to someone on Yom Kippur?

There are two appropriate greetings over Kippur - one is ‘gmar chatimah tovah’ (which literally means ‘good final sealing’ in Hebrew and refers to the God sealing our fate, as explained above. The other is quite simple and is ‘tzom kal’ which means ‘easy fast’ although some orthodox Jews prefer to use the expression ‘meaningful fast’. 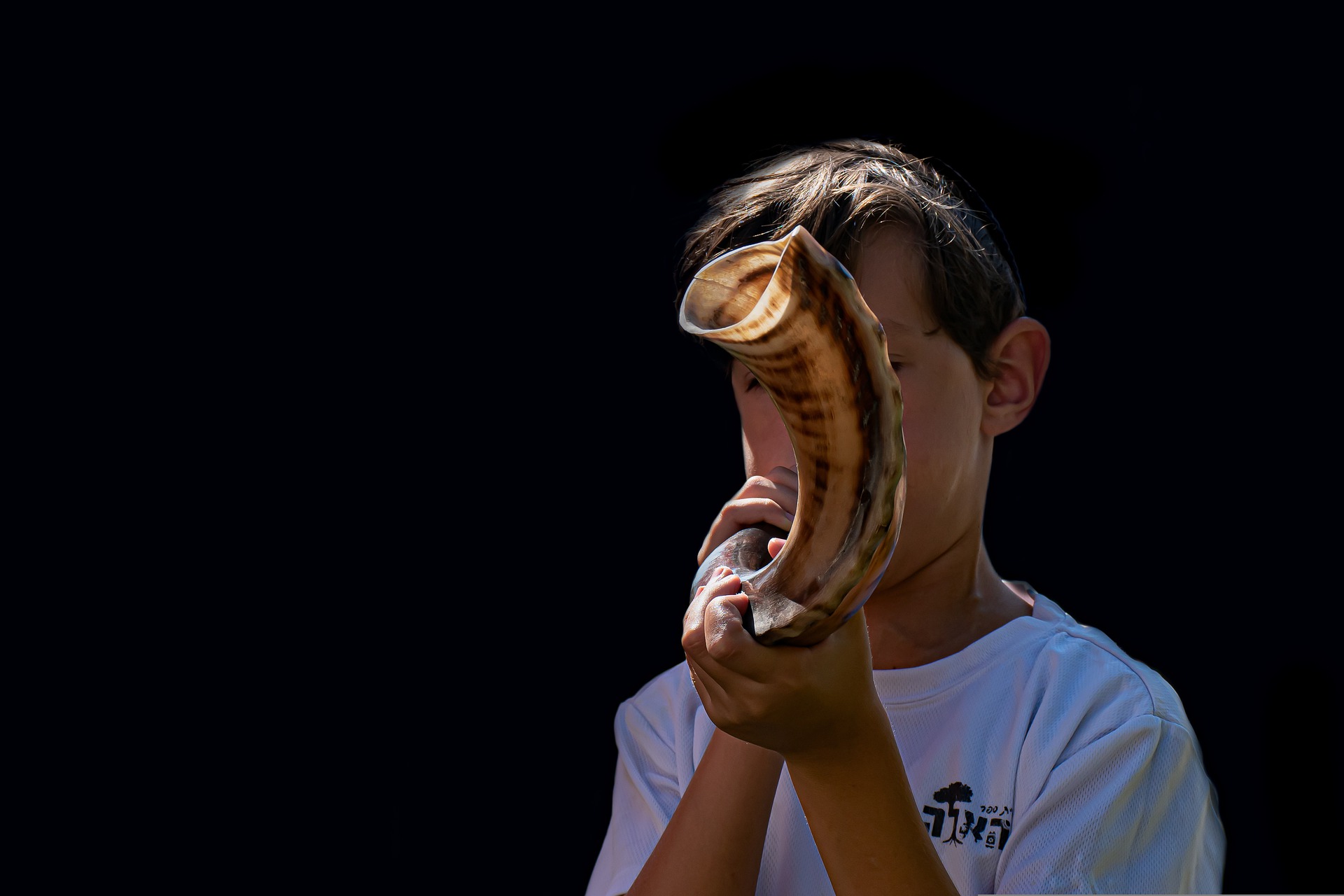 What happens in Israel on Yom Kippur?

If you are visiting Israel over this period, you will be struck by what an extraordinary time it is. In fact, nothing we can write here can really describe just how special it is. This is the ONLY day of the year in which everything comes to an entire standstill.  All shops, restaurants, cafes, and bars are closed. Ben Gurion airport suspends flights for the duration. Most striking of all, there are no cars on the road (it is a tradition, and respected by all Israelis, not to drive on this day).

If you’re in Jerusalem, the atmosphere will be incredibly holy. You will hear no laughter or chatter and all you will see in the streets is people walking to and from the synagogue. However, if you’re in Tel Aviv (which is a more liberal and secular city) you’ll be struck at how many children (and adults) are riding their bikes up and down the main roads and even the highways!

Will I be able to buy food anywhere on Yom Kippur or travel?

No. It’s very important for anyone on vacation in Israel on this day to know that you will not be able to buy food in supermarkets or restaurants, order delivery, or travel in the country using public transport. You MUST make preparations beforehand so that you aren’t caught off guard.

Go to a store well in advance and buy provisions to tide you through the period. It really is imperative that you do this, otherwise, you might end up - inadvertently - not eating yourself for 25 hours!  Even if you’re in a hotel, the restaurant will be closed, both for breakfast and lunch. 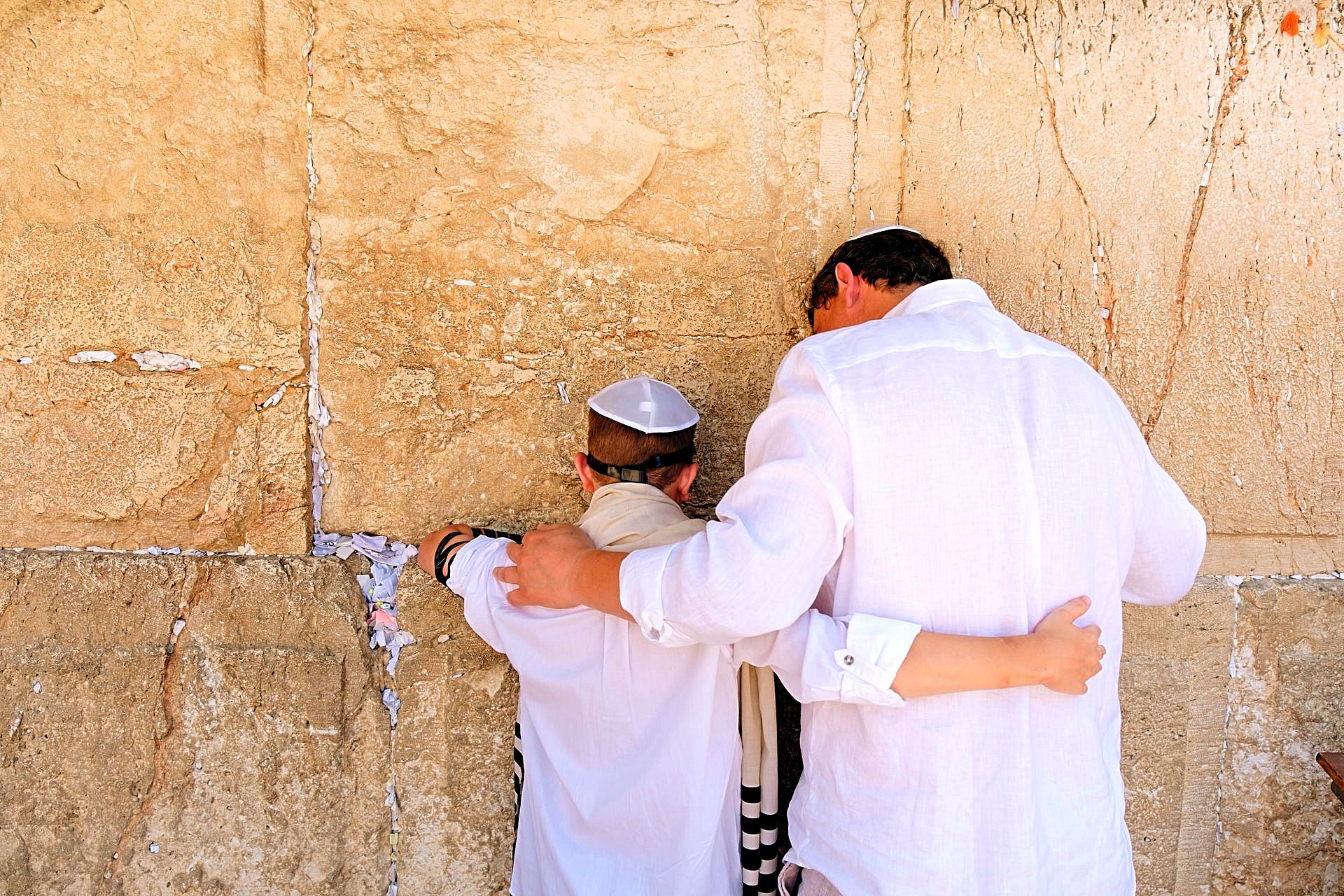 Jewish father and son praying together at the Western Wall, Jerusalem. Photo by Anton Mislawsky on Unsplash

What happens in the synagogue on Yom Kippur?

There are a number of different services that are held throughout Yom Kippur - beginning at dusk and continuing into the next day. Prayer is intensive and soulful - many people spend the majority of this festival at the synagogue. Kol Nidrei is the first and one of the most moving prayers recited - the liturgy is moving and the melodies are haunting.

The prayer - or some would argue ‘statement’ - declares that all vows are ‘absolved, remitted, canceled, and declared null and void. This is less to do with the idea that Jews cannot be trusted (!) and more so with the idea of asking God to forgive us for all public statements made in the previous year that were contrary to Jewish ideals!

Kol Nidrei is a prayer recited in Aramaic (an ancient Semitic language) and with great devotion, as are all of the other prayers throughout the 25 hours. There are memorial prayers named ‘Yizkor’ (‘Remember’ in Hebrew), the ‘Viddui’ (Hebrew for ‘confession’) as well as a reading from the Book of Jonah (the biblical figure who, famously, in trying to escape God, fled Jaffa by boat and was swallowed by a whale). Kippur ends with a service called ‘Neilah’ which means ‘Closing of the Gate’. 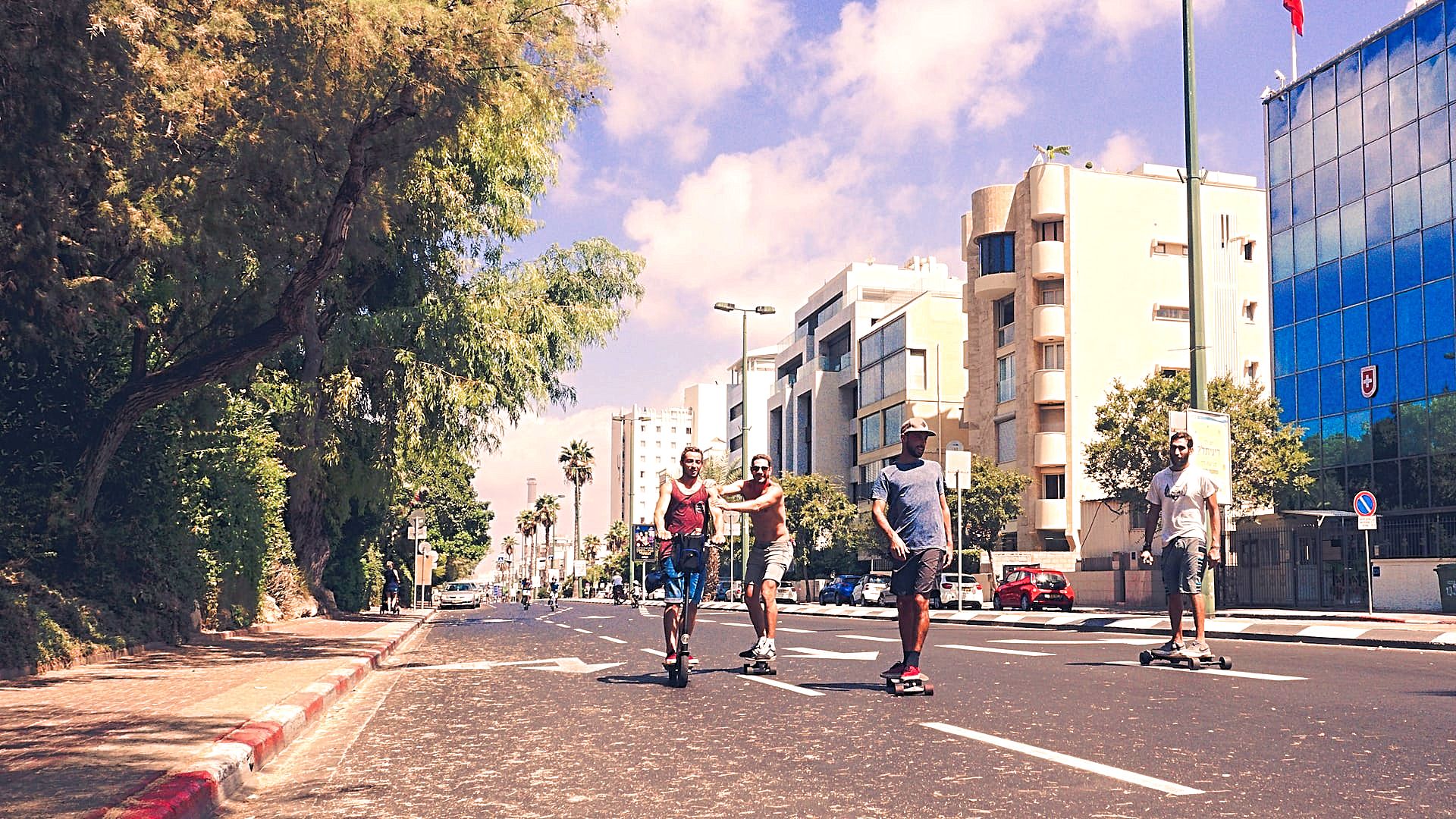 Why do people in the synagogue wear white on Yom Kippur?

White symbolizes purity and on Kippur Jews strive to be as good and pure as angels. Also, white is the color in which Jews are traditionally buried, and therefore, if you follow the analogy, we must take the view on Yom Kippur that every moment matters because we live life meaningfully, knowing that death could come to us at any moment.

What traditionally happens after the day ends?

Once Neilah is over, people will head home, or to the houses of friends, and break their fast.  This can involve anything from a cup of tea/coffee and a bowl of soup or a huge meal where people eat until they are sated!  After the intensive prayers and not having eaten or drunk for 25 hours, rest assured everyone is grateful for the chance to relax and indulge a little!

We hope you’ve found the above interesting and if you’re interested in learning more about Israel or booking a trip, don’t hesitate to contact us. We offer organized tours and day trips all over Israel - from the Dead Sea and Masada to the hills of Galilee and from holy sites in Jerusalem to food tours in Tel Aviv’s Carmel Market, we promise you a holiday you won’t ever forget. 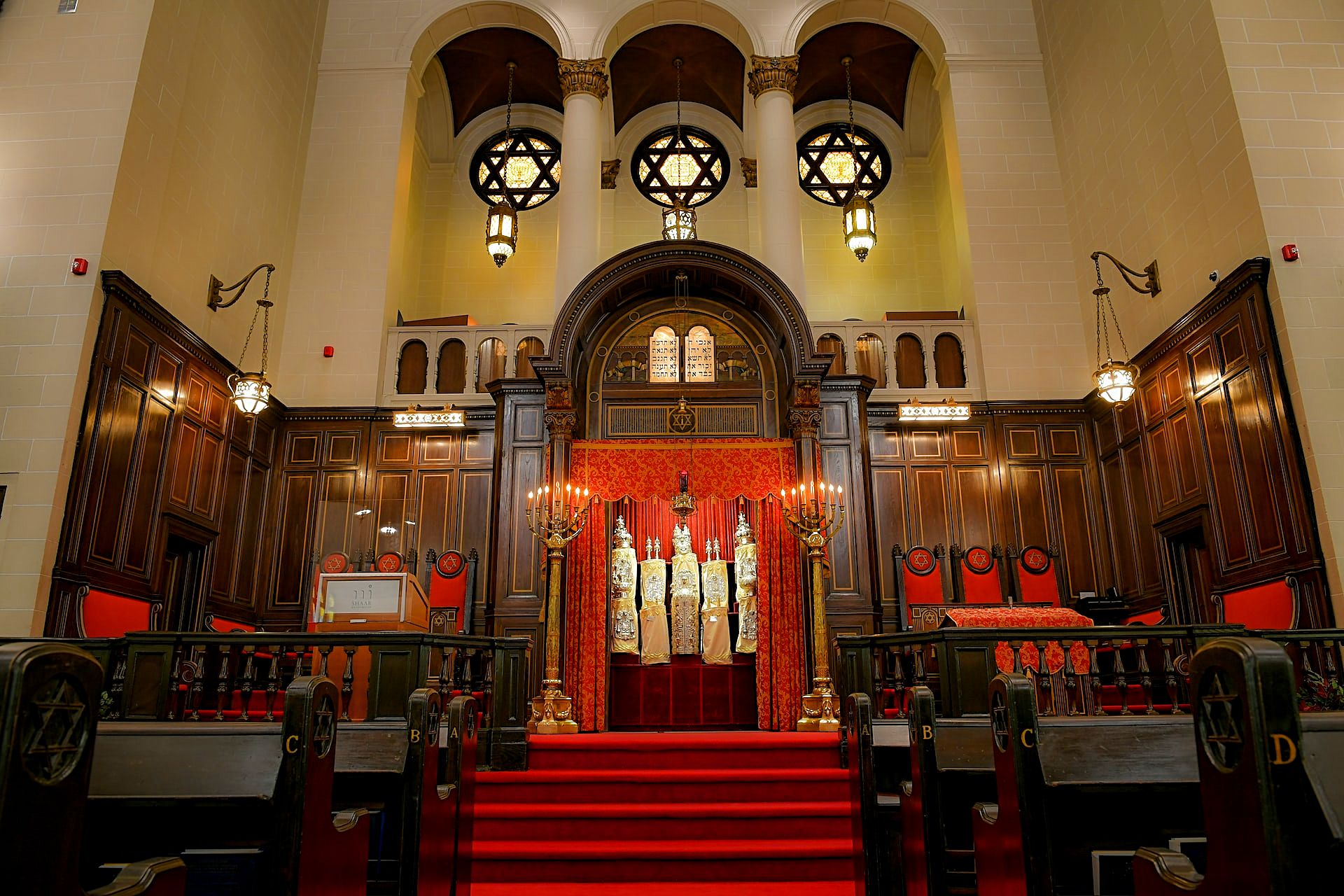 The interior of a synagogue. Photo by Lainie Berger on Unsplash