St Catherine’s Church is located within the Church of the Nativity compound in Bethlehem. St. Catherine’s is the Bethlehem parish church and part of a Franciscan Monastery. The church is one of the top attractions in the city and stands on the site where Jesus appeared before St Catherine of Alexandria in the 4th century and predicted her martyrdom.

The Catholic church and its Franciscan monastery exhibit elements from structures of different historic periods. The church is part of a UNESCO-listed World Heritage Site. St. Catherine’s Church is the venue for the Christmas Eve Midnight Mass held annually on the 24th of December and broadcast live around the world to millions of Christians.

On this site in 1347, a shrine was dedicated to St. Catherine. In 1882 the structure was expanded thanks to funding by the Emperor of Austria. The new structure incorporated elements of a 12th century Crusader Church and Charter House as well as the 5th-century Sanctuary of St. Jerome that once stood here. The church and specifically the cloister were redesigned in 1948 by renowned architect Antonio Barluzzi. In 2013 the church was expanded to accommodate more worshipers.

St. Catherine lived in the 4th century in the Egyptian city of Alexandria. She was a princess and a scholar who adopted Christianity after having a vision of the Virgin Mary and infant Jesus. She is known for having converted many people to Christianity at the young age of 14.

She was martyred at the age of 18 at the hands of Roman Emperor Maxentius at a time when the Romans were persecuting Christians. Catherine was hung on a spiked wheel after being beheaded. From St. Catherine, we get the “Catherine Wheel.” Angels took her body to Mt. Sinai (Mt. St. Catherine) where her relics are now held. St Catherine is venerated mostly by the Eastern Orthodox Church and she is celebrated on her feast day on 24-25th November.

What to See in the Church of St Catherine

At the entrance of the church, you can see beautiful arches that have been incorporated from the Crusader-era St. Jerome’s Cloister. It is possible to enter the Church of St. Catherine from the north transept; the underground caves, via the adjacent Nativity Church and through the church’s Cloister of St. Jerome.

The large church has a nave and two aisles with a raised choir. The stunning stained glass window that creates a backdrop to the main altar was added in 2000 and depicts the nativity scene. Topping the roof of the church is a statue of Saint Catherine. Barluzzi’s design of the cloister incorporates column and their capitals from the 12th-century monastery.

Standing at the center of the cloister is a statue of Saint Jerome. The original shrine that was once just a small part of the Franciscan Monastery is now part of the altar dedicated to St. Catherine. There is also an altar dedicated to Mary where you can see an 18th-century statue of Jesus as a young child. The church is connected to the adjacent Church of the Nativity by an underground passage.

The Caves beneath St. Catherine’s

The highlight of a visit to St. Catherine’s is a visit to the underground caves. Steps lead you down beneath the church to grottoes holding several shrines and ancient tombs. A passage leads from the caves to the adjacent Church of the Nativity.

Among those buried in the caves are St Paula, her daughter Eustochium and St Jerome. It was in one of these grottoes that St. Jerome is believed to have translated the Latin Bible into the vernacular.

Want to visit St. Catherine Church? Join our Half day tour to Bethlehem. 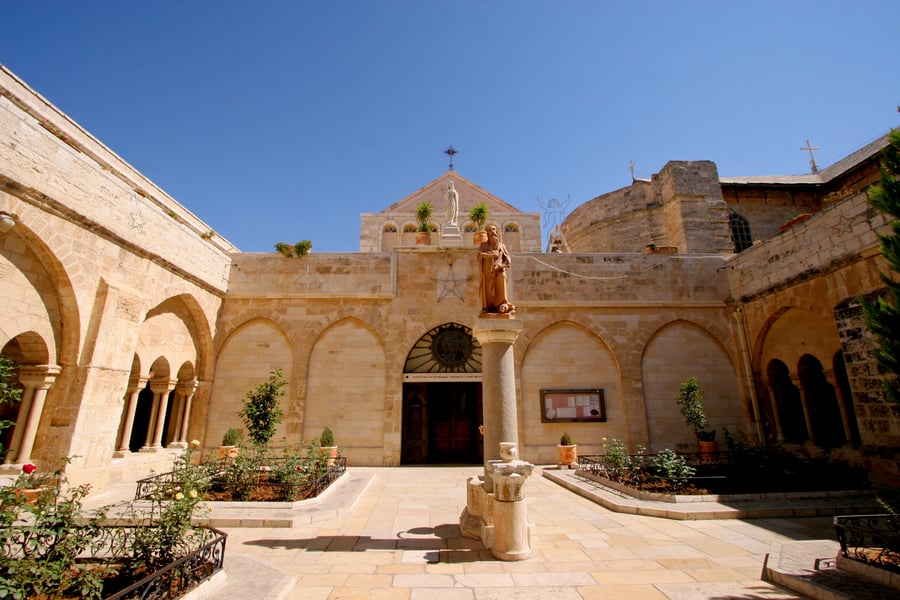