Manger Square is one of the top attractions in Bethlehem, a Palestinian city in the West Bank 10km south of Jerusalem. The Square is flanked by two other major attractions – the Church of St Catherine and the Church of Nativity. Manger Square takes its name from the adjacent Church of the Nativity that enshrines the Grotto the Nativity (the “manger”) where Jesus was born although the square itself is not mentioned in the Bible.  As the heart of Bethlehem’s Old City Manger Square is the center for all tourist activity and the starting point of most Bethlehem tours. Manger Square is also the site of many events throughout the year. Flanking the Square are the 4th century Church of Nativity; Church of St. Catherine; the Mosque of Omar; Bethlehem Municipality building; souvenir stores and the Bethlehem Peace Center.

During the Ottoman-era Manger Square was an open space used as a fresh produce and livestock market. In 1929 the market was moved to a new location in the Old City. In 1998 and 2000 the Square was renovated. Manger Square has been pedestrian-only since the recent renovations and is a meeting place for tourists and locals. The square has trees that prove shade; benches and fountains.

On Christmas Eve, Christians gather from around the world to celebrate the birth of Christ at the site of the nativity. Inside the adjacent Church of Nativity a Midnight Mass is held while outside on Manger Square the service is broadcast on giant screens. The Midnight Mass is also broadcast around the world to millions of Christians. A huge Christmas tree stands in the center of the square and the crowds sing Christmas carols and pray. Christmas is celebrated here three times a year; December 25; January 7th for Orthodox Christians and on January 19th according to the Armenian Christian tradition. 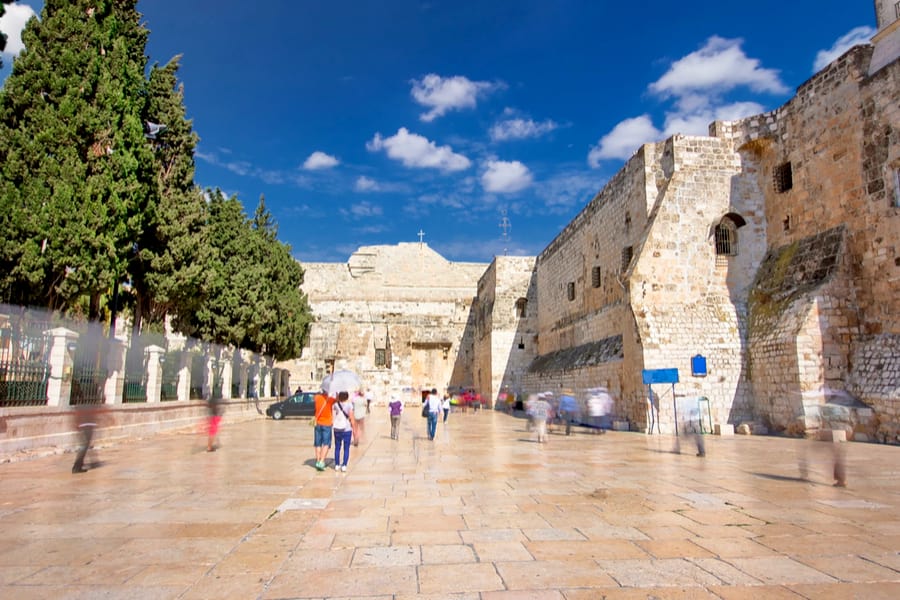