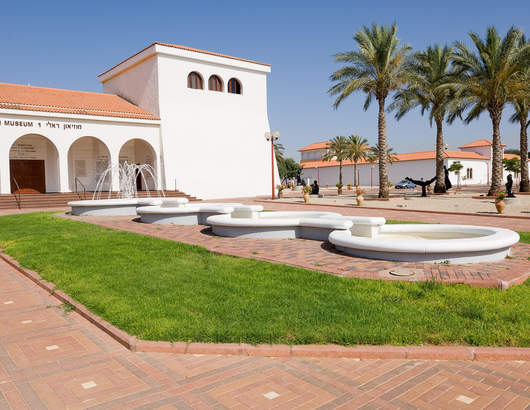 The Ralli Museum Foundation has five museums across the globe. You’ll find two of these outstanding museums in Caesarea at the Harry Recanati Cultural Center. The two Caesarea museums, Ralli 1 and Ralli 2 display independent art collections and are set within a 40,000m² park. Together the museums offer visual arts, sculpture, painting, and architecture.

The Ralli Museums Foundation was established by Harry Recanati. The aim of the foundation is threefold: to put a spotlight on contemporary Latin American art; to commemorate the expulsion of Jews from the Iberian Peninsula in the 15th-century; to preserve for posterity the art and history of the Jewish community of Thessaloniki, Greece which was almost completely annihilated during World War I.

In the first Ralli Museum, you can see exhibits by leading artists including Rodin, Salvador Dali, Arman, and Andre Masson. The museum’s main focus is on Latin American and Spanish artwork. This is emphasized by the building’s Spanish Colonial architecture. From the upper level of the museum, there are views across Caesarea’s Roman aqueduct all the way to the sea.

At the museum, the entrance is an obelisk honoring the Italian people. There are five exhibition halls, several octagonal patios, and a large outdoor garden area. Some of the museum’s archaeological artifacts are on display in public areas of Caesarea.

This museum is focused on Spanish Jewry and as with Ralli 1, the museum building reinforces the theme of the museum. The museum building’s Moorish style is emphasized by an expansive courtyard with palm trees, a central fountain, and 12 lion statues, similar to the Alhambra Palace in Granada, Spain.

In the courtyard, you can see marble statues of famous Spanish Jews including Maimonides, Ibn Givrol, and Yehuda HaLevi. A marble wall lists Jewish communities in Italy since antiquity. Inside the four-story museum, there are exhibits of 16th-18th-century European paintings with biblical themes.

The Roman Theatre of Caesarea