Criss-crossing the entire land of Israel, and stretching just over 1000 kilometres (around 630 miles), the Israel National Trail (‘Shvil Israel’) is the kind of experience every hiker will remember for years after.  National Geographic have listed it as one of the world’s “most epic” trails and when you hike it you’ll understand why...it marries mountains with desert, coastal plains with green fields, snow-capped hills with warm waters in the Red Sea, Roman and Crusader ruins with Arab/Druze villages...basically, it’s a taste of everything the land of Israel encompasses. 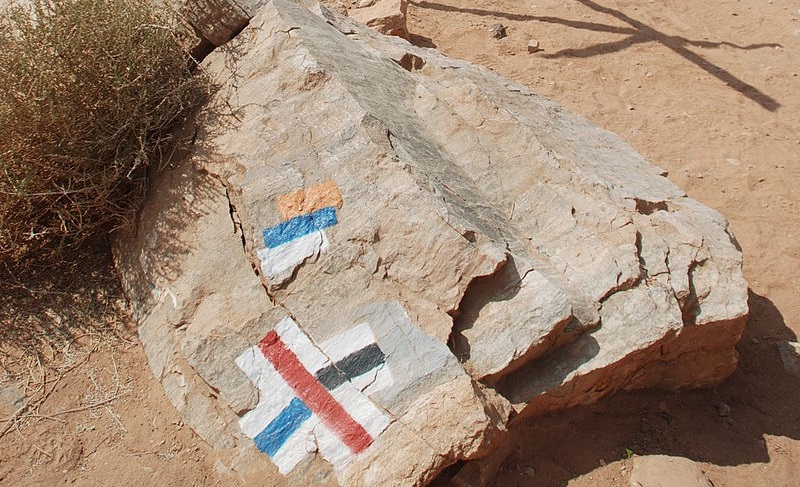 It also offers the hiker something else too - a chance to understand more about the Biblical significance of the land as well as the opportunity to meet Israelis from every walk of life...not just those whose villages and towns you’ll pass through, but those who will aid you practically, as you continue on your journey.  (But more of that later.)
The trail itself is easily marked in colorful stripes - blue white and orange - and is the brainchild of Avraham Tamir and Ori Dvir, who love hiking and nature.  Inaugurated back in 1995, first and foremost its aim is to give hikers the chance to experience Israel in its most natural settings.  What’s also great about the National Israel Trail is that you don’t have to complete the entire stretch.  If you're not an expert hiker, or you only have a few days to spare, that’s fine - you can focus on one particular part of it or even take day trips. But for any ardent hiker, between 4-6 weeks will need to be set aside in order to complete the entire stretch.

On a practical level, strong boots, snacks, and a hardy water bottle are all must-haves, particularly for when you’re in remote areas of the trail.  The SPNI (Society for the Protection of Nature) sells high-class topographical maps, in English, with an emphasis on the hiking trails - they are an invaluable resource!

There’s also more good news - all along the route, you’ll be able to call upon the services of “Trail Angels”.  These wonderful people provide hikers with a place to shower/sleep, kitchen facilities, and quite often dinner, or at the very least a coffee and a chat, in their homes. Getting to meet locals in their natural habitat?  It doesn’t get much more authentic than this!  Some Trail Angels also partake in a water-burying scheme (in the desert areas) which really comes in handy when you’re halfway through your day and parched.

It’s up to you whether you want to work your way up or down the country, but since trekking in Israel’s summer can be unbearable, we suggest you begin your journey in the autumn or winter.  Here’s an example of an itinerary, beginning in the south, in mid-February.

Timna, the Arava and the Negev 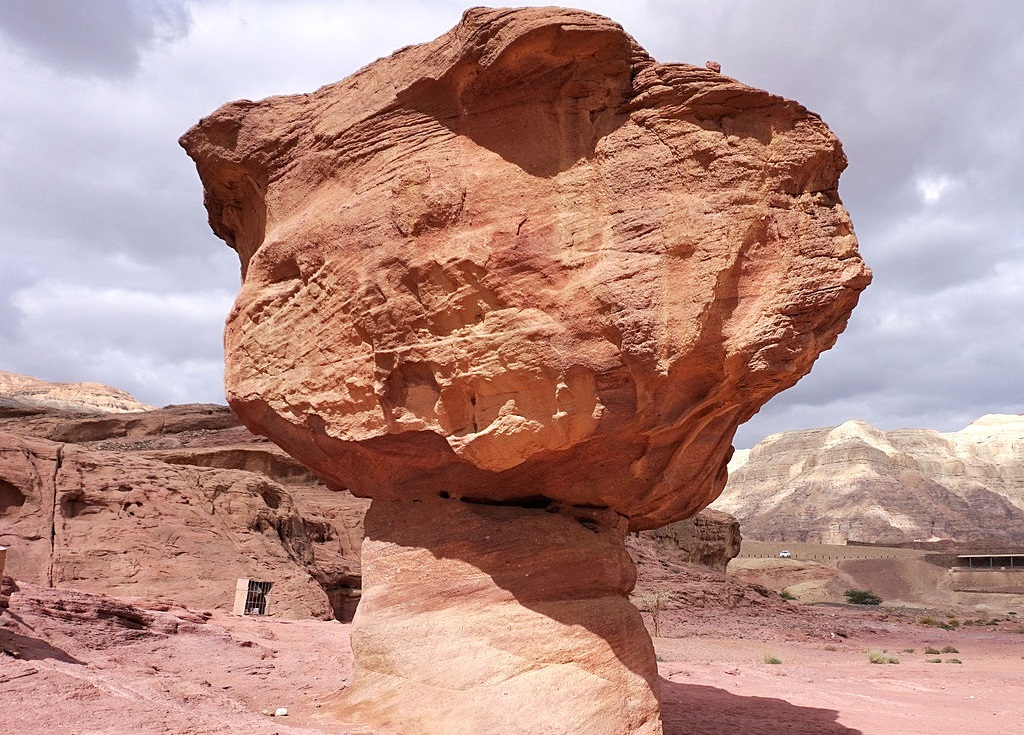 Start your journey in Eilat (on the tip of the Red Sea), and spend your last day of ‘freedom’ on the beach, enjoying views of Jordan, Egypt, and Saudi.  With its endless palm trees and clement waters, it’s the ideal place to enjoy some R&R.
Trekking through the Eilat Mountains, and the Arava desert, pass through Timna Park - 15,000 acres set in a valley shaped like a horseshoe, surrounded by Mount Timna and some very steep cliffs.  The geology is quite fascinating (our tip: look out for the Pillars of Solomon, two sandstone columns that tower above you). Heading up through the vast desert expanses, you’ll pass Kibbutz Neot Samdar (they sell excellent vegetarian produce) and arrive in Mitzpe Ramon, a small town that sits on the edge of the magnificent Ramon Crater.  (It’s actually possible to hike, bike, or take a jeep tour inside the crater). About 35 kilometers north, you’ll arrive at the Midreshet Ben Gurion, an intimate community that boasts scientific institutes, the burial site of David Ben Gurion (Israel’s first Prime Minister), and some striking views of Wadi Zin. Call upon Trail Angel Arthur du Mosch, who leads tours of the desert, is an expert horse-rider and actually caught a leopard in his home, many years back! 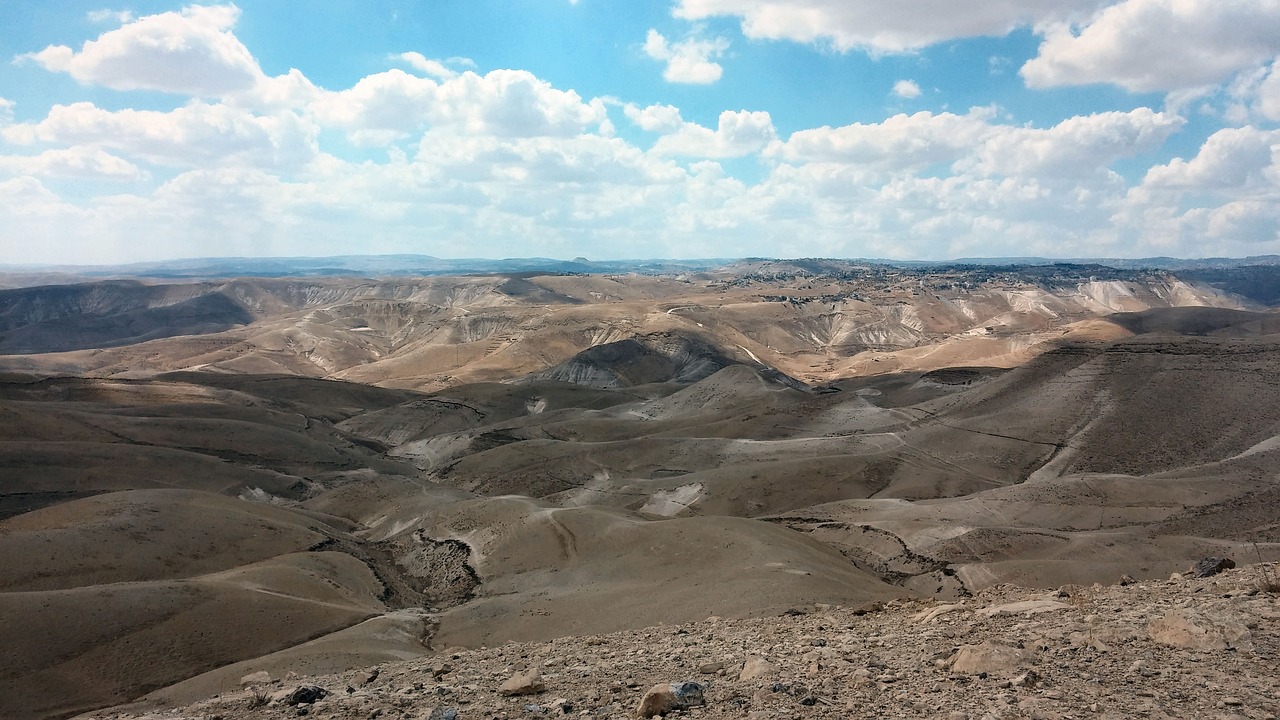 Head north through the Negev to the Yatir Forest, Israel’s largest forest which, despite receiving very little rainfall, is home to some of the country’s most varied woodlands (including a unique eucalyptus with red blossoms).  Enjoy some archaeology - the Yatir Ruins (associated with the Biblical city of Jatti).

From there it’s into the Judean Hills. Don’t miss the breathtaking views inside the ‘British Park’ and sites such as the Luzit Caves, Kidon Ruins, and Monastery of Beit Jamal.  Trek through dirt tracks, pass caves and look over Highway 1, which served as a battleground in Israel’s 1948 War of Independence. The trail continues through the Sharon coastal area, including Tel Aviv. The ‘White City’ (named after its Bauhaus Buildings) can be a good place to enjoy a couple of days’ rest, some good coffee, and sandy beaches.

Carmel and the Galilee

It’s then north to the Carmel...an incredibly lovely part of the trail, with wondrous views of the Galilee and steep ravines in which you can hike.  The path runs through Kibbutz Yagur, where you’ll find more helpful Trail Angels. Dip your feet in the Nakhash Stream, sip at your water bottle and breathe in the clean air.

Further north, you’ll arrive at Mount Tabor, rising up from the very flat Jezreel Valley. Green all year round, it provides magnificent observation points. (Our tip: don’t miss the caves and the Greek Orthodox/Franciscan churches).

Mount Meron, the Yesha Fortress, and the Upper Galilee

About 70 kilometers north, just after the spiritual center of Safed, you’ll arrive at Mount Meron which, at 500 meters above sea level, is Israel’s largest peak.  It is home to ‘Elijah’s Chair’ (a huge lectern-shaped rock that is rumored to be where the great prophet sat). Parts of the area are a protected nature reserve - and don’t miss the village of Meron either (where you’ll find the tomb of Rabbi Shimon bar Yochai).

Another 30 km north, you’ll arrive at the imposing Yesha Fortress - built by the British during the Mandate period. Today it’s used by the Israeli border police.  Hike up the path that leads to a splendid panorama of the Hula Valley below. On your left, you will see the villages of Metula and Kiryat Shmona and, across the Valley, the Golan Heights (whose peaks might even still have snow on them).

You will also find at the site a plaque that remembers the 28 men who died fighting here in the War of Independence (our tip: don’t miss the small grove nearby that has 28 trees planted in memory of the men). The last part of the trail - the Hula Valley, Upper Galilee, and Naftali Ridge - will see you hiking when spring has truly arrived - with luck you will have blue skies and sunny days, and all around you will be fields carpeted with brightly colored crocuses.

On the eastern side of the Naftali cliffs, the trail will afford you views of planted forests (after the Second Lebanon War, a reforestation project was undertaken). Don’t miss the Saadia Scenic Lookout, the Manara Cliff, and the Shepherds Spring. And by then, you’re homeward bound and you can honestly say you know the land of Israel a great deal better!