Day Trip to Masada and the Dead Sea

Tourism is slowly returning to the world and Israel is no exception - COVID restrictions are easing and if you’ve been double vaccinated and your last shot was less than 6 months ago, then you’re welcome in the Holy Land. Once you’ve received the results of your PCR test from the airport (which usually takes around 12 hours) you’re free to start exploring - and what better place to start than with two of Israel’s top attractions - Masada and the Dead Sea. 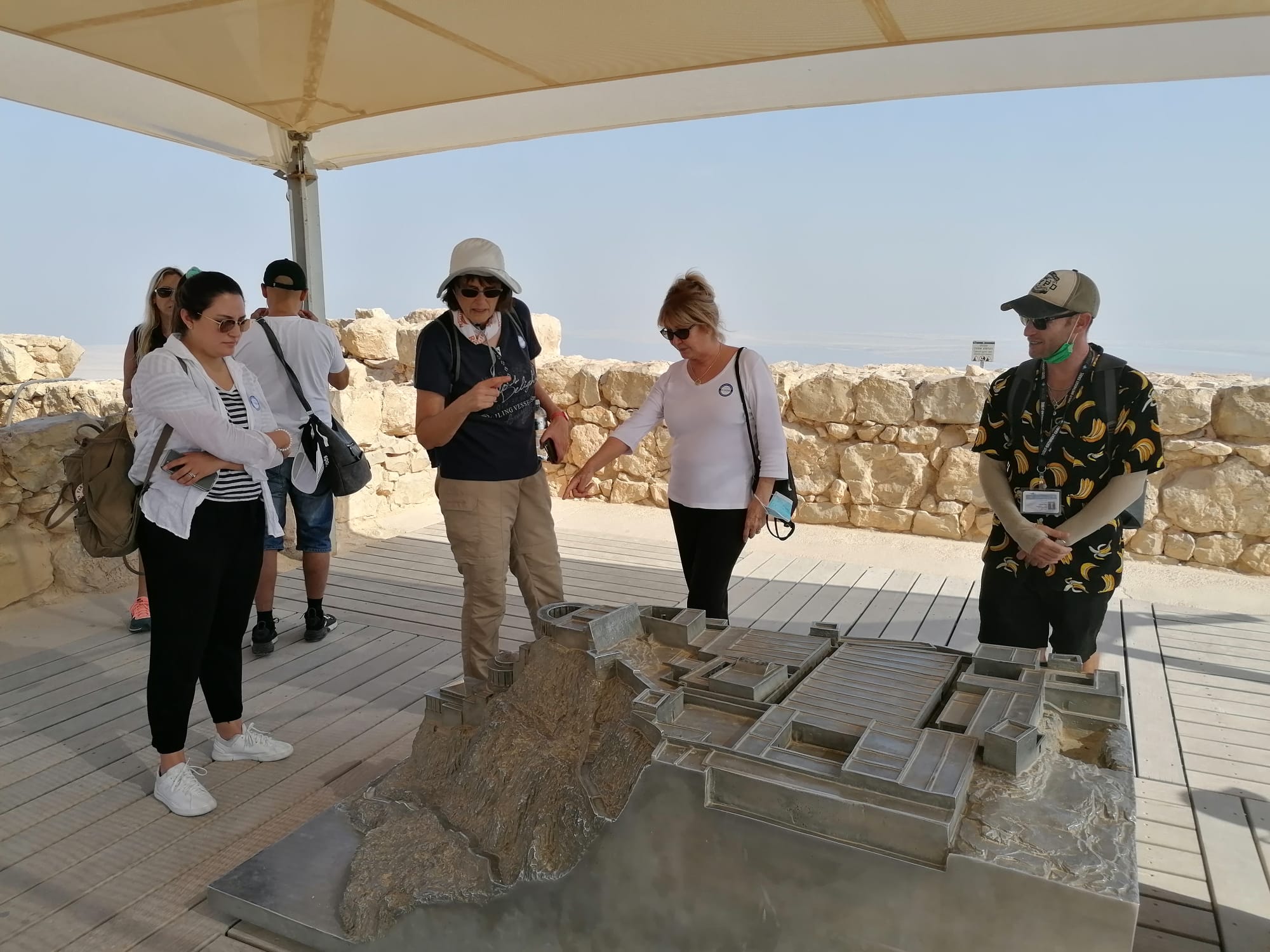 Tourists on a day group tour to Masada and the Dead Sea with Bein Harim. Photo credit: © Sarah Mann

Writing this not just as Bein Harim’s social media maven but as an intrepid solo traveler, I’ve always wondered what it’s like to explore sites abroad with a group, led by a professional, guide and today I’m being given the chance to find out first-hand, joining one of the company’s first-day tours running since Winter 2020!  I really have no idea what to expect so I’m coming with an open mind, plenty of sunscreen, snacks, and the requisite bathing suit!  Let’s see if it’s all it’s cracked up to be…

Bleary-eyed, I show up at the pick-up point, in downtown Tel Aviv, early.  I quickly spot the other participants - three women, from France, Austria, and the US respectively.  They’re all taking a longed-for vacation after Corona and love the idea of a group day tour - they tell me they don’t want to deal with car rentals, Israeli roads, and complications in Hebrew. They also want to learn as much as they can about the area we’re visiting, and guided tours in Israel are perfect for that.

And before we know it, here he is, in a bright yellow banana-themed t-shirt. His name’s Itamar and he’s been guiding for over a decade - he’s young, fun, personable, and immediately we all warm to him. We hop in the van and head towards Jerusalem, to pick up our fifth trip member.  Before we’ve even hit the highway, he’s giving us a bit of the history of Tel Aviv and quizzing us on our Hebrew. This is going to be fun! 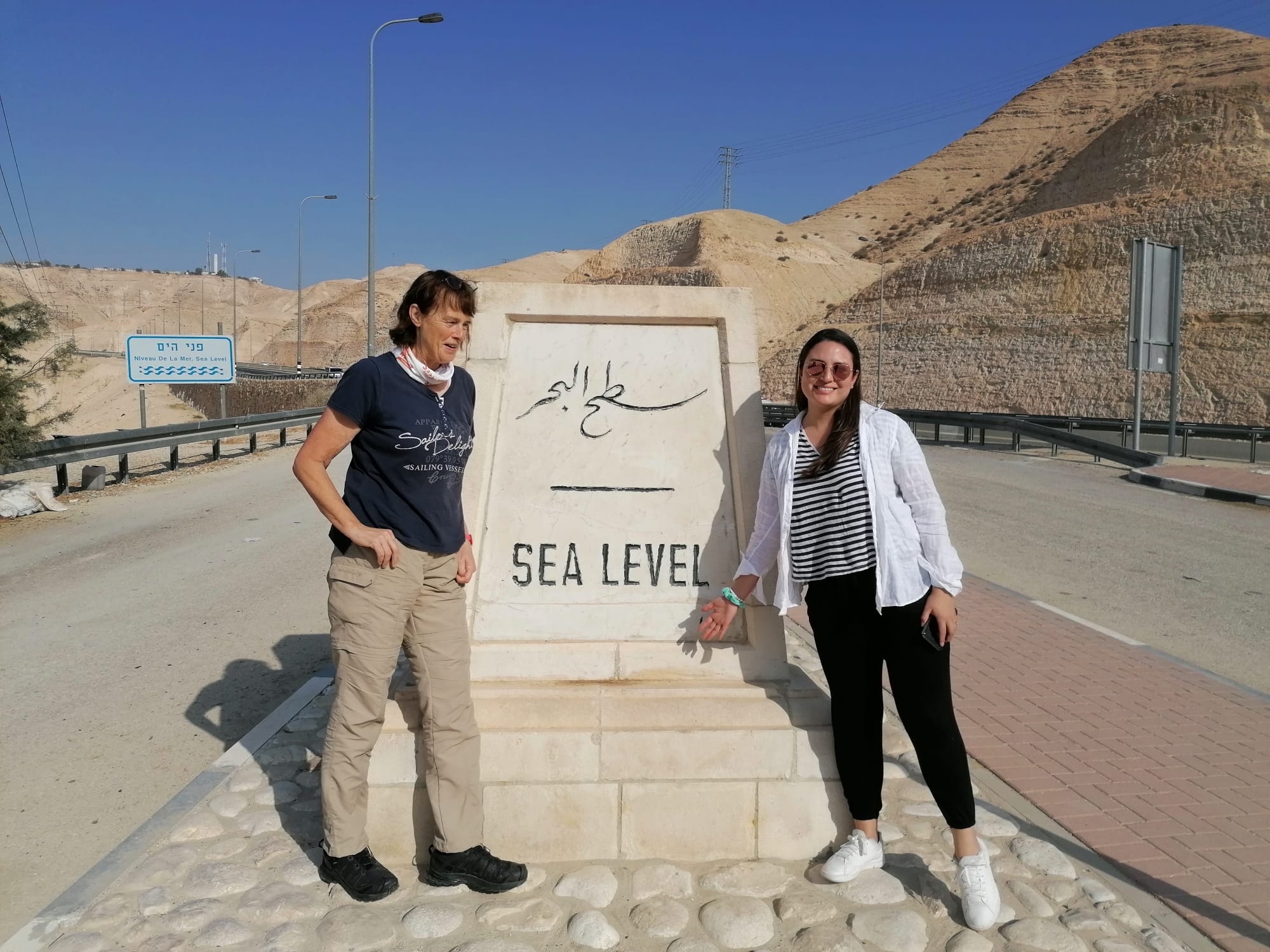 We pick up Elena at the hotel - we’re a bit late because we’ve been battling city traffic and then we’re off. Jerusalem’s en route to the Dead Sea and soon we’ve left the city behind and are confronted with desert scenery and Bedouin shepherds. We stop for an obligatory photo at the ‘Sea Level’ sign and stretch our legs - it’s November but the weather is perfect - a toasty 26 degrees.

Then we jump back in our van and head south, heading further and further below sea level. The Dead Sea’s the lowest point on earth (!) and we can feel the temperature rising.  Itamar reminds us to drink lots of water (a must in this part of the world) and points out things of interest en route, including the Qumran caves (where famous Dead Sea Scrolls were discovered there in 1947).

There is a number of sinkholes (where the soil has eroded, with devastating consequences) causing parts of Route 90 to be cordoned off. The Dead Sea is evaporating - in the last 30 years it’s said to have lost 30% of its water - and the climate crisis isn’t helping it either. 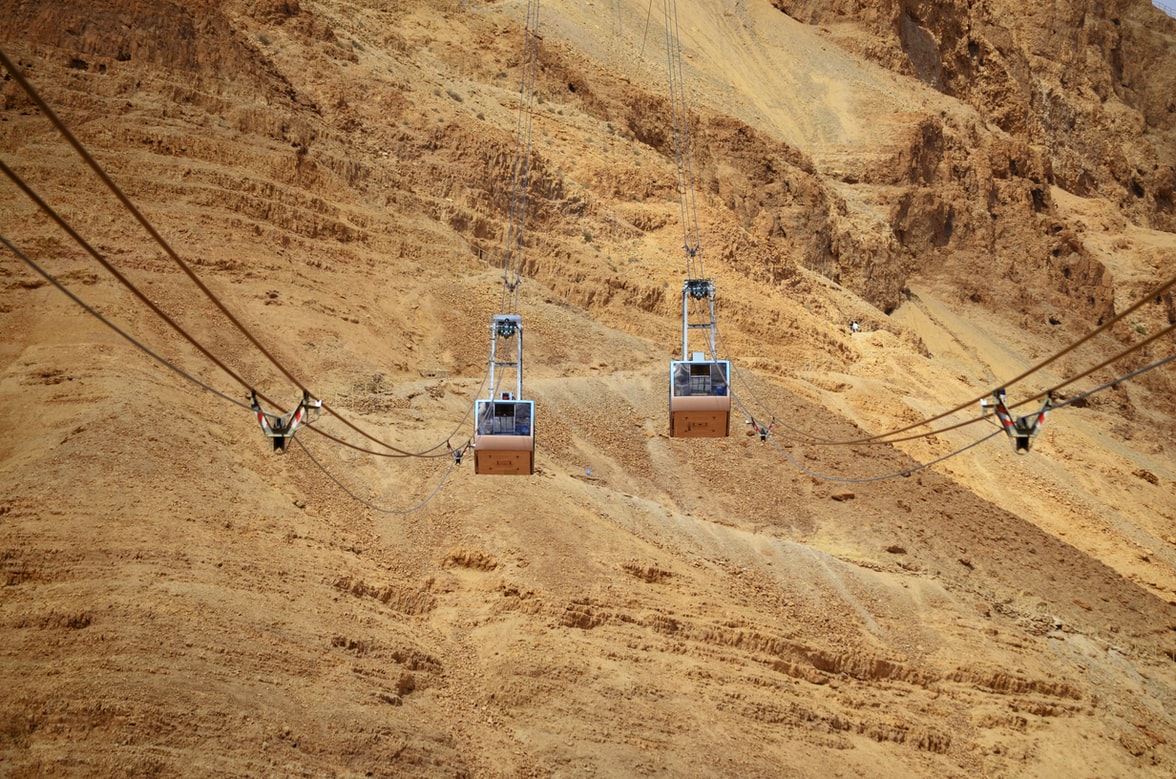 In the meantime, we’re all getting to know each other, chatting about where we’re from and why we took the trip. For some, it’s the first time in Israel, for others a chance to rediscover old places. We’re a group of independent women, all with our own reasons for loving travel, and being driven by Itamar is a delight because he’s hilarious and knowledgeable at the same time.

After a pit stop at the Ahava outlet (where we grab a coffee and a couple of us buy some mud pack treatments), it’s onto our first stop of the day - Masada. This ancient fortress is a place I personally have visited a fair few times but I have to admit that every time I return, I get goosebumps.

Completely isolated, at the top of a mountain in the midst of the Judean desert, it takes your breath away. Designed by King Herod, a master builder and lover of the good life, not only was Masada his ‘winter retreat’ but also a haven from his enemies. And Herod spared no expense either - this Royal Citadel contained not one but two sumptuous palaces, remains of which have been excavated and we’re going to see today. 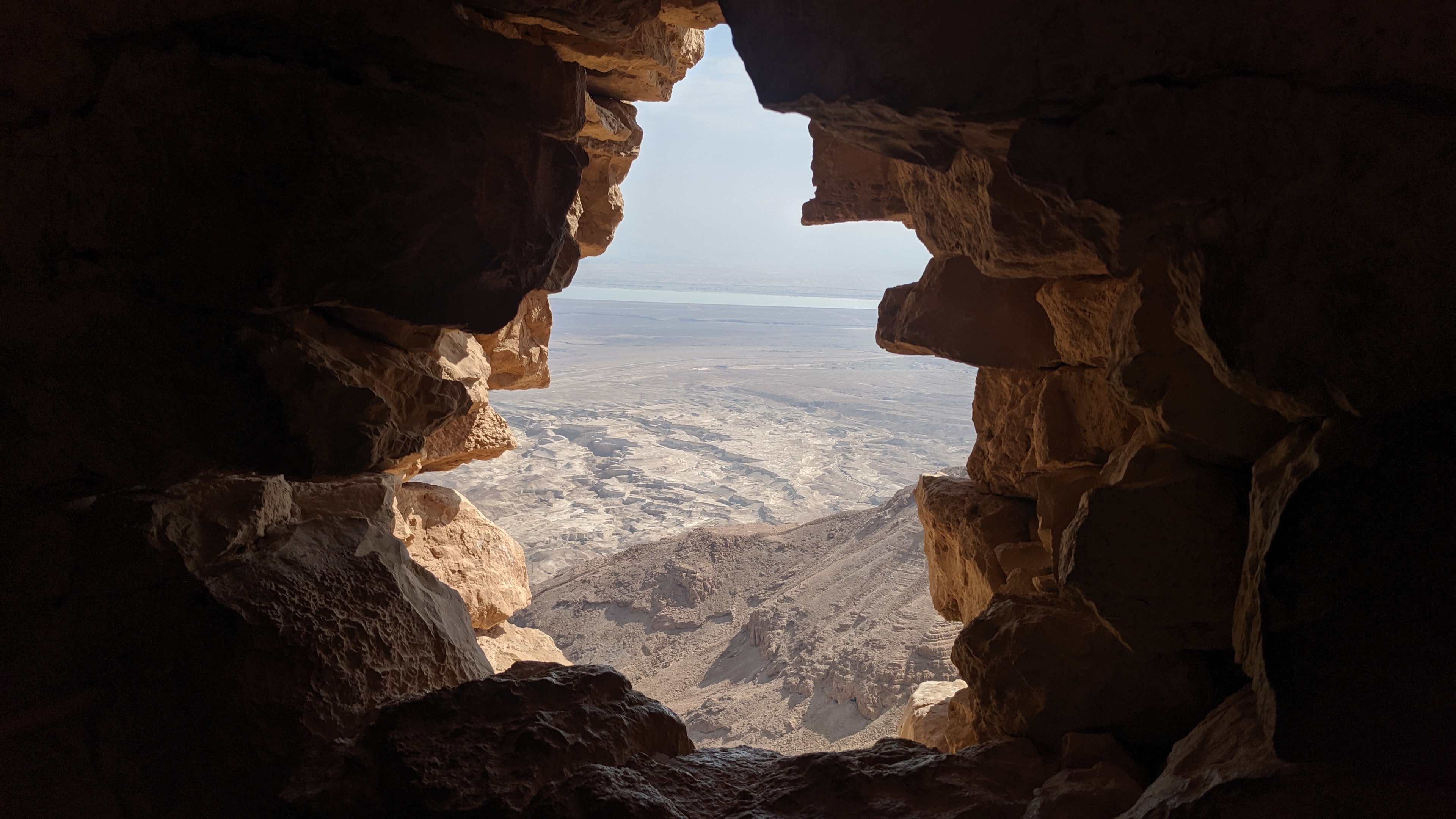 Looking through an ancient stone wall opening at the Masada ruins in Israel. Photo by Craig Vodnik on Unsplash

Before we ascend by cable car, Itamar gives us a little history of the complex (which is, by the way, completely fascinating) and we watch a fun 7-minute film, explaining the strategic importance of the fortress and why it’s so important to Israelis today.

There’s a lot of Jewish history bound up with this place - after all, it was where Jewish rebels, 2,000 years ago, decided to commit suicide en masse rather than be taken alive (and then be made slaves) by the Romans. A sobering thought - but also a symbol of Jewish resistance, heroism, and bravery.  No wonder it’s so revered today.

Wow!  Up we go, in the cable car, with astonishing views below us, including the ‘snake path’ which winds through the mountain precariously. We then spend a good hour exploring the site - frescos, bathhouses, cisterns, storerooms (with tonnes and tonnes of grain), and even a synagogue. Now I realize the advantage of taking guided Masada tours - Itamar has a wealth of information at his fingertips and I’m learning so much (even as someone who’s studied Jewish history for 20 years).

He takes us from place to place, answering our questions, explaining the whys and wheres of this astonishing fortress, treating us to some ‘Bamba’ (a tasty peanut snack that Israelis love, which he packed in his bag in case we became hungry before lunch!) We look at models of Masada, in terms of how it was set out, back in the day, and marvel at the thermal pipes, the aqueducts, and even the sleeping quarters for the guards who protected Herod. 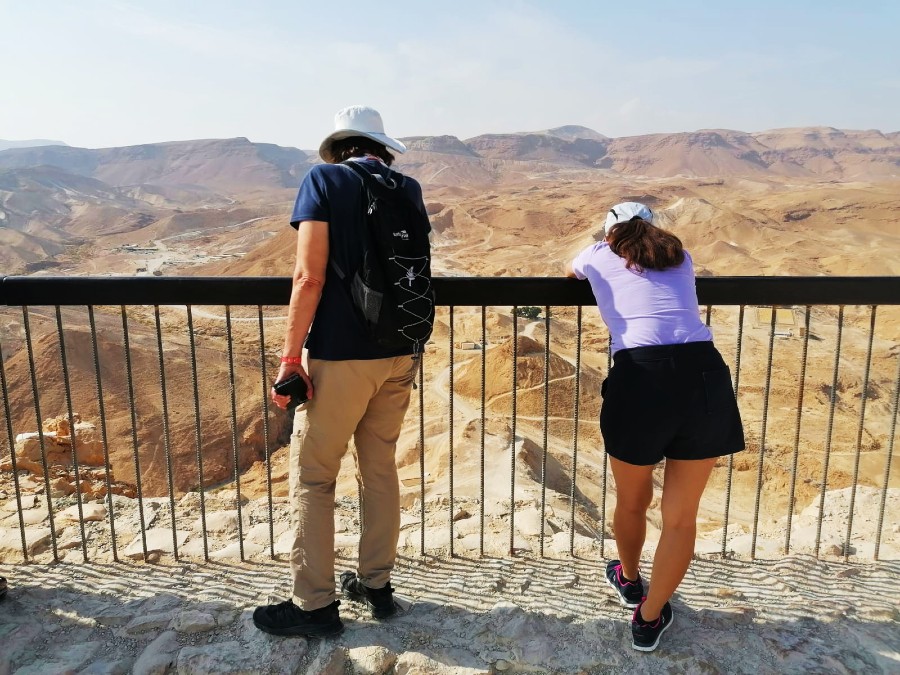 There truly is no end to the resourcefulness of the engineers involved in Masada, we all agree.  Built in the year 30 BCE, it’s spread out over three terraces and made up of eight Roman camps, a siege wall, and a ramp constructed of earth and wood, which was established on the western side of the fortress.

It’s also an example of a luxurious villa - Herod imported only the finest wines and best food here, no matter the cost and the lengths that armies of servants had to go to transport it. Still, this was a place where the King didn’t just enjoy himself but also conducted business - and Herod was certainly one for impressing his guests.

It’s super hot by now and we’re all looking for shade, every time we move to a different spot.  Itamar takes us to some fabulous lookout points where, at every turn, we’re afforded panoramic views. The Dead Sea glistens before us, shades of blue and turquoise, and the sky is clear.  What’s even more astonishing is that, because of COVID, Masada is almost deserted. We don’t have to wait to enter a single part of the complex and, in certain parts, the silence almost deafens us. 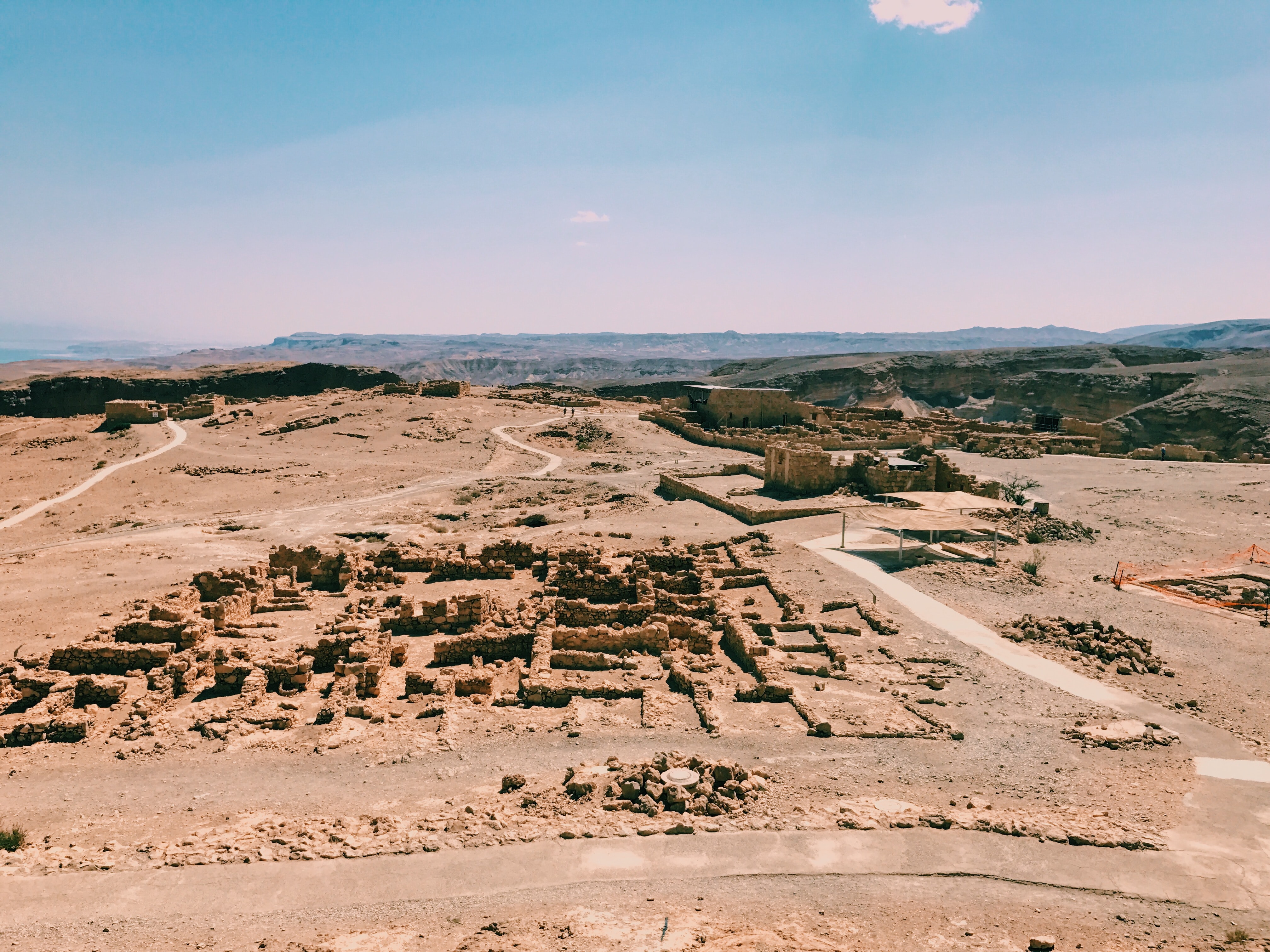 It’s also fun to be in a group tour like this - because it’s a lot smaller than normal, it gives us the chance to ask endless questions and really get to know each other better. We’re a very diverse group - Maria grew up in South America and because she’s catholic, it’s always been her dream to visit Israel.

Francois’s been in the Holy Land before, but it was over 20 years ago, and in the meantime, she’s been learning Hebrew,  Linda’s flown in from LA because she wanted to take a holiday before starting a new job.  And Ute’s taking a quick break, having hopped a flight from Vienna to Tel Aviv with Wizz Air.

It’s really eye-opening, meeting all these different people, who’ve come from all over the place to visit this country!  It’s also good to see how much they’re enjoying their time in Israel and, from what I can see, their day out with Itamar. Our guide reminds us to keep swigging water and we oblige. Now it’s off to the Dead Sea, for a spot of lunch, some floating in the lowest point on earth and some optional mud-slathering! 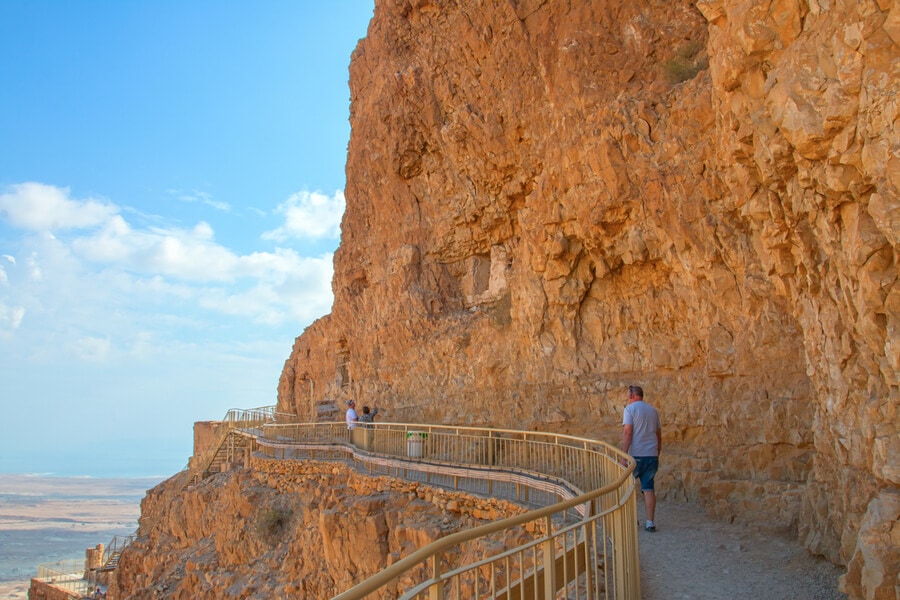 We’re heading to Kalia Beach, at the top of the Dead Sea (for which there is an entry fee, but it’s included in the price of the day trip). Itamar, our loveable guide, gives us the lowdown on where to find changing rooms, lockers, and places to grab a bite (because we’re all starving!)

Nobody can wait to get into their bathing suit - the idea of floating in water is quite novel! - and soon we’re all at the water’s edge.  As someone who’s content just to sit in a chair and admire the views of Jordan from across the water, I soon become the appointed photographer, snapping everyone as they wade in and realize, quite quickly, how buoyant they are!

The weather’s good, even though it’s mid-November, and the beach isn’t particularly crowded either. The air feels so clean and pure, and I can’t help but smile as I watch my group trying valiantly to put their feet down in the water!  Some are reading books (the ultimate photo opportunity, to show off back home).

Some are floating peacefully and one has got out of the water to cover herself in black mud, which can be found all over the beach and is perfect if you want to rejuvenate your skin!  Even Itamar has stripped down to his trunks and has gone in, and I have to smile as I watch them all larking around… 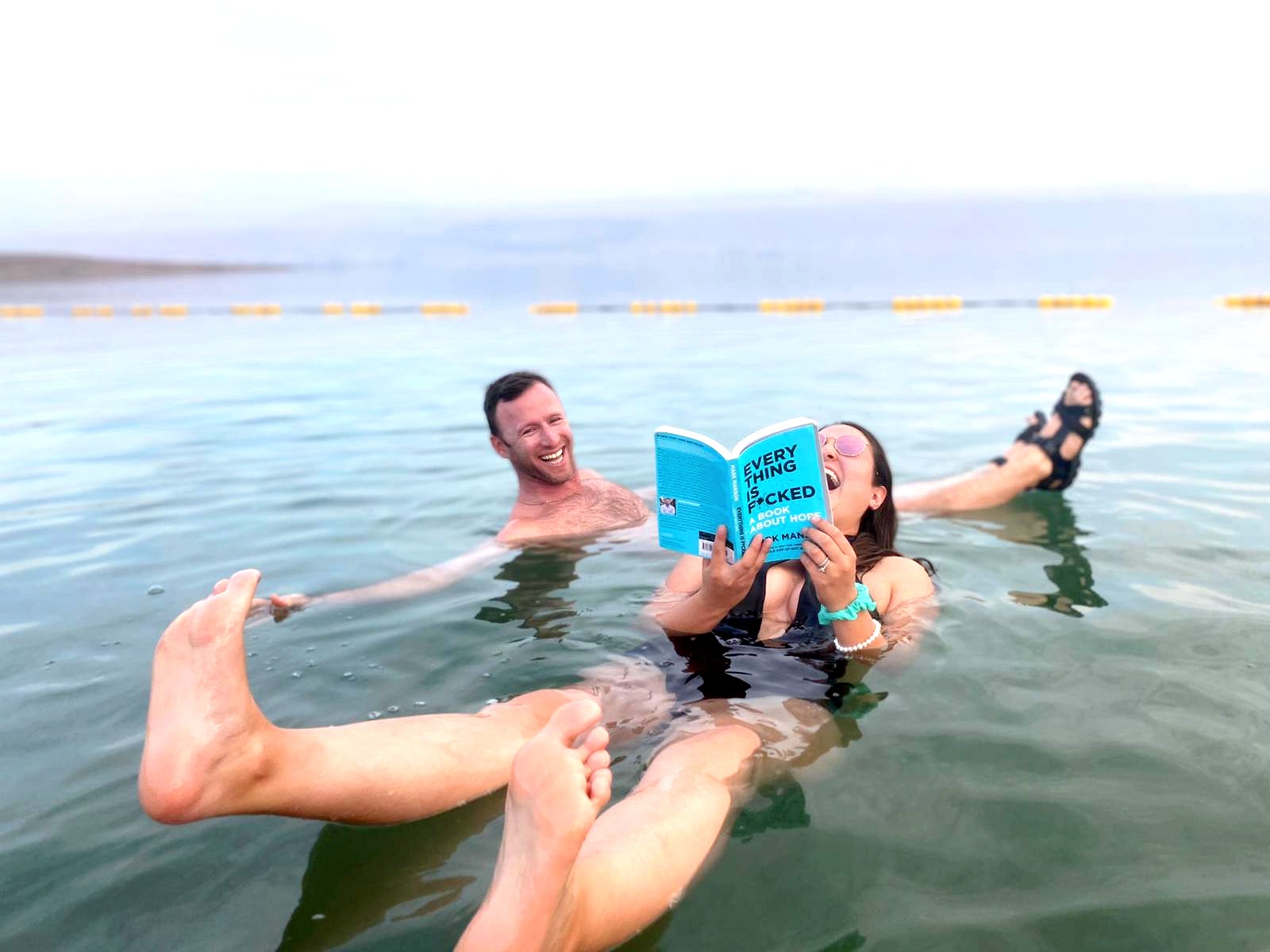 The beach closes at 4.30 pm (since it gets dark early at this time of the year) and, as sorry as we are to leave, we’re all quite exhausted. We hit the road back to Jerusalem and as we arrive in the city, dusk is turning to dark and the lights are twinkling. Itamar drops off two of our participants (one wants a cocktail, the other has decided - on my recommendation - to make an impromptu visit to the Israel Museum since it’s open until 9 pm that night).

Everyone’s swapping numbers and hoping to meet again in Tel Aviv, for dinner, in a couple of days. We’re tired but happy, that’s for sure. By the time we arrive back in Tel Aviv, I’m dead beat, Itamar, who’s gone above and beyond for all of us today, drops us all off personally, close to our homes, and as I hug them all goodbye I wonder why I’ve spent my life avoiding day group tours.  After all, even if you’re traveling independently in Israel, there’s no reason why taking these kinds of trips isn’t a great idea.

So there you have it - what to expect on a day tour to Masada and the Dead Sea. And whilst I do work for Bein Harim Tours, I have to say that this is a day tour I’d recommend to anyone - history, archaeology, scenery, and a chance to chill out at the beach too. These are sites that everyone should see on a trip to Israel, and taking one of the organized Dead Sea tours is ideal for anyone who doesn’t want to hire a car, appreciates the knowledge of a guide, and wants to make new friends. Competitively priced and giving you a lot of bang for your buck, what’s not to like?  In fact, I might even take another one soon. Watch this space… 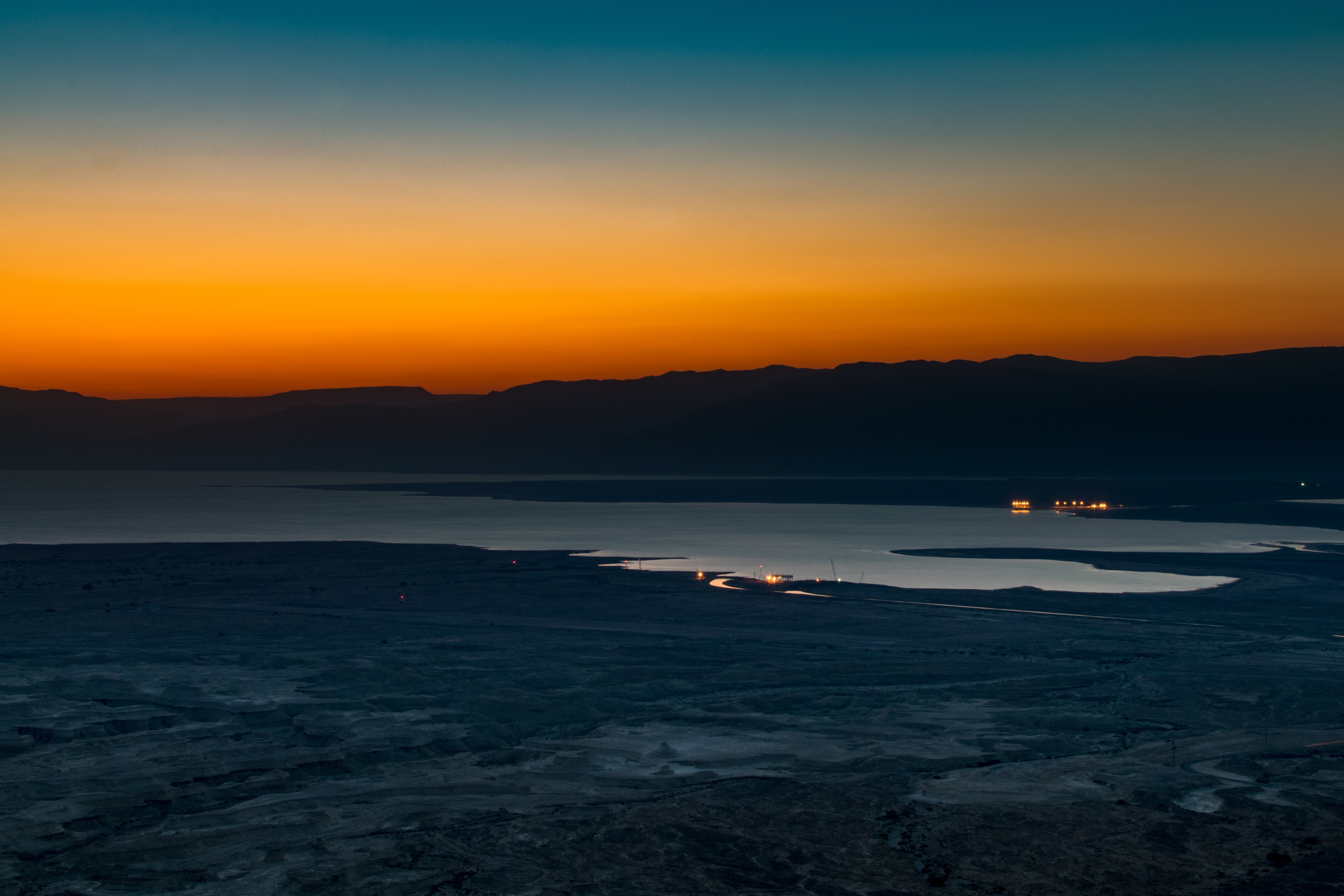 Sunset at the Dead Sea, Israel. Photo by Benjamin Rascoe on Unsplash