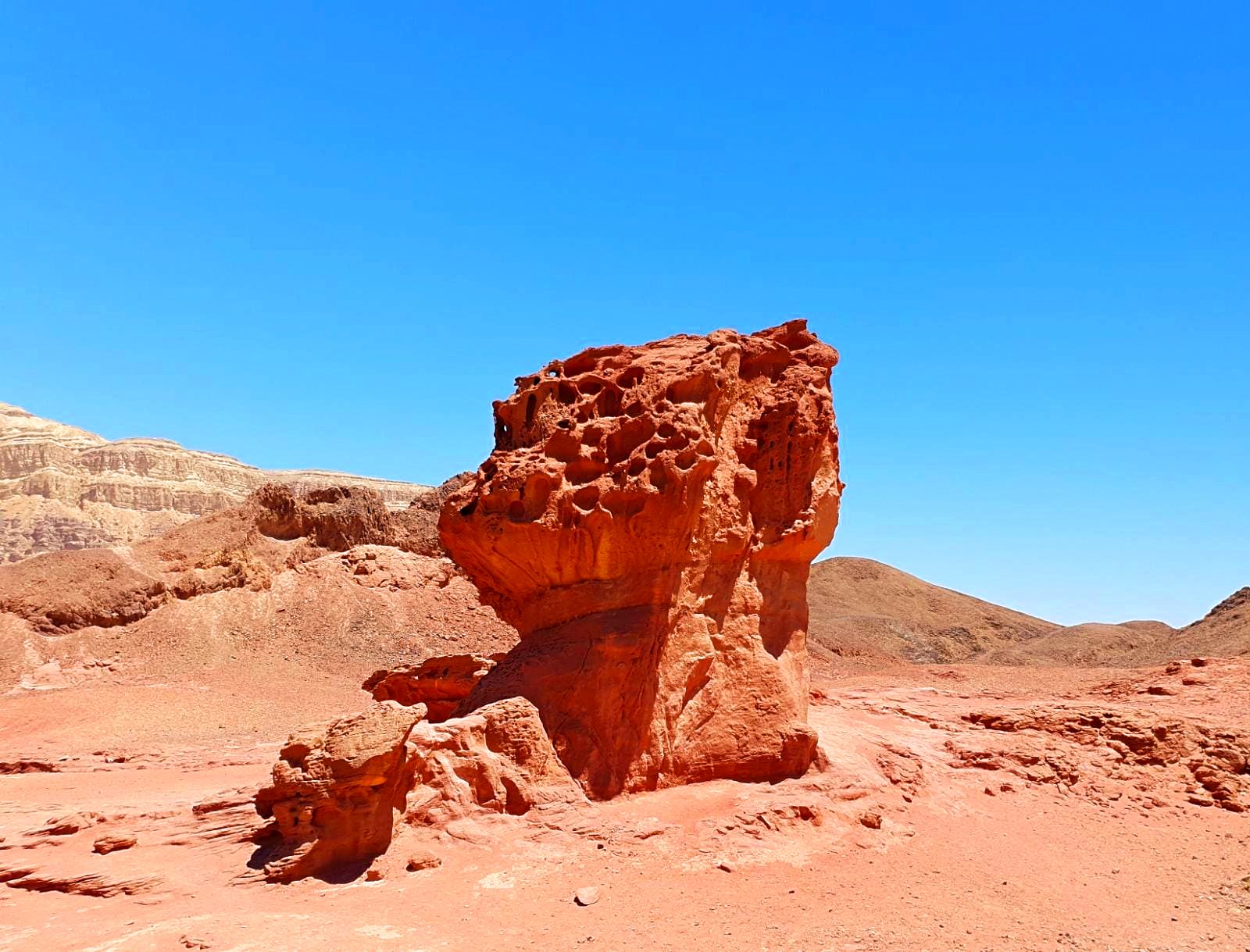 Timna Park - also known as Timna Valley Park - is located in the far south of Israel, in the arid Arava desert. It is 30 kilometers north of Eilat, which sits on Israel’s Red Sea and overlooks the Gulf of Aqaba, in Jordan. Timna is rich in copper ore and historians believe that there have been mines in existence there since 5 or 6 BCE.  Set in around 15,000 acres, with steep cliffs and red-pink colored mountains surrounding it, Timna is a spectacular natural attraction, perfect for hikers, trekkers, and those who love ancient history, and with a few geological surprises thrown in for good measure.

The History of the Copper Mines

All across the park are ancient copper mines with underground shafts.  Evidence - in the form of radiocarbon matter - shows that these mines were once connected to Ancient Egypt (at the time of the New Kingdom).  The theory is that copper was mined by workers for its use in all kinds of industries, for over 500 years, from the 16th to the early 11th century BCE.  The copper found was in great demand and used by the Ramses Pharaohs for many purposes, including the making of utensils, weapons, sculptures, and elaborate jewelry.

Some historians believe, however, that mining continued for much longer than this period and only reached its heyday several hundred years later.  What we do know for sure, however, is that thousands of tunnels and shafts were dug, in order to extract the copper from deep inside the stone, and many of these still exist today.

Fun fact: until recently, experts assumed that the backbreaking digging was carried out by slaves, but archaeologists are now not so sure. Quality dyed fabrics (which the dry heat preserved) point to these laborers being actually employed. Olive and date pits, as well as goat bones, reinforce their theory- these foods are part of a rich diet, and not something usually fed to slaves!

Geography and Points of Interest

Timna is an excellent place for hiking with many unusual sites.  (Bear in mind, however, it is a large area, which makes it time-consuming to move, on foot, from one spot to another.  For this reason, many people prefer to take an organized tour). Shaped like a horseshoe, and ringed by steep cliffs, as you begin walking you will spy, on the western valley side, ‘the Arches.’  These are natural structures, formed as a result of erosion, and the walking trail that follows them also runs along some copper mine shafts. One of Timna’s top draws is its unique rock formations, some of which are quite extraordinary:

‘The Mushroom’ - This is a huge stone boulder, resting on a sandstone column, and - like the Arches - it was also formed as a result of erosion.  Made of red sandstone, and mushroom-shaped, its shape was made by centuries of wind, water erosion, and humidity.  All around it is copper ore smelting sites, dating back to 12-14 BCE.

King Solomon’s Pillars - this striking, and well-known, natural formation is known as Solomon’s Pillars.  Jutting out of a rockface, erosion, and fractures in the sandstone eventually formed them into a series of pillar-shaped structures.  They were named after the American Archaeologist - Nelson Gleuck - who claimed that they were related to King Solomon and named them appropriately.  His theory has never been proven but, of course, the name stuck in everyone’s minds.  These pillars form the background for evening concerts and performances that Timna holds in the summer months.

Statue of Hathor - this is a small Egyptian temple at the foot of King Solomon’s Pillar, dedicated to Hathor, the Egyptian goddess of mining.  Initially erected by Pharaoh Seti I, it was destroyed in an earthquake and subsequently rebuilt by Ramses II.  He drew up plans for a large courtyard, made of sandstone and granite.  When archaeologists began excavating, all kinds of artifacts were discovered, including cartouches (seals), alabaster vessels, and animal figurines.

Mine Shafts and a Lake

Whilst many tourists prefer just to peer down a mine shaft and use their imagination as to what happened there, hundreds of years ago, for the more adventurous It is possible to explore some of Timna’s mines alone. It is estimated that Timna is home to about 10,000 ‘saucers’ (mine shafts that fell into disrepair and ended up covered in sand and rocks).

Climbing down the ladder of the ‘Open Mine’, you descend through a deep shaft and eventually into caverns through which you can walk.  Look out for the niches carved into the sides and the chisel marks that miners once made here. (Tip: be careful to wear study footwear and walk with a partner, for increased safety).

Even more astonishing, Timna is home to a lake. Yes, a lake (albeit an artificial one) can be found here and, built for recreational purposes and surrounded by acacia trees and pergolas, it’s an ideal spot to enjoy the shade, rest, and enjoy the outstanding views of the desert, Pedal boats are available for hire and activities are also offered for children, including sand bottling (the sand here is a unique color).

Arriving at Timna by public transport is not an easy task, so most people choose to travel there either by car (which takes about 20 minutes from Eilat) or as part of an organized tour.  At the entrance gate, you can pick up a road map, which is included in your admission fee.  Inside, there is the helpful staff at a visitor’s information center who can advise you on which hiking trail best suits your needs.

The trails are of varying difficulty, but however long you are hiking for, please be aware of the sun (which can be extremely dangerous at certain hours of the day).  It is always best to come prepared - wear cool clothes (preferably cotton, which can breathe easily), a wide-brimmed hat, sunscreen, and plenty of water.  Look out for ibexes and gazelles, as well as the dramatic red-purple-pink-orange hues of the cliffs all around you.

As well as its 25 different trails, Timna has 4 different biking paths, all newly paved and guaranteed to please avid cyclists.  The park also offers a ‘Challenge’ area, close to the red sandstone cliffs, where you can try your hand at archery, rappelling, and wall climbing. There is a Bedouin restaurant, serving simple food and refreshments, and a campground, which rents large tents with mattresses inside if you do not have your own tent to pitch.  Inside the visitor pavilion is a souvenir store, a cafeteria, and a dedicated space where adults and children alike can enjoy a multimedia show of the area’s history.

Entrance to Timna costs 45 NIS (36 NIS for children under the age of 15) and includes a bottle for filling sand and entrance to the multimedia show.  Opening hours are: 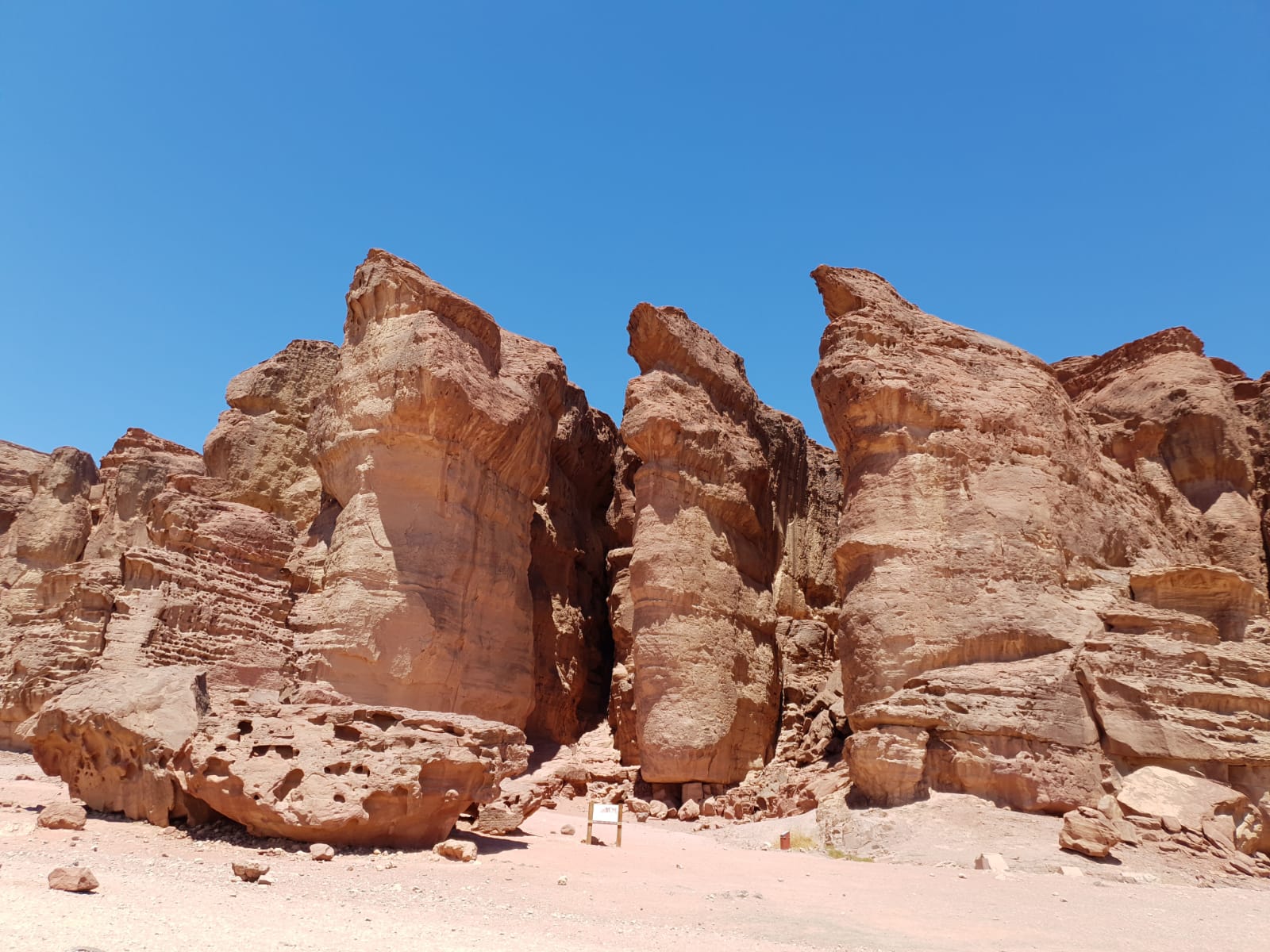