As you enter Tel Aviv you will be met with the glorious sight of the city’s long stretch of sandy beach flanked by the promenade, restaurants, hotels and cafes. What makes Tel Aviv beaches so special is their proximity to the city center. Just a few minutes’ walk from the heart of the city and your feet will be standing in sand! The long stretch of beach (hof in Hebrew) runs 14km along Tel Aviv’s Mediterranean shore and is divided up into several official beaches, each with their own amenities and character. 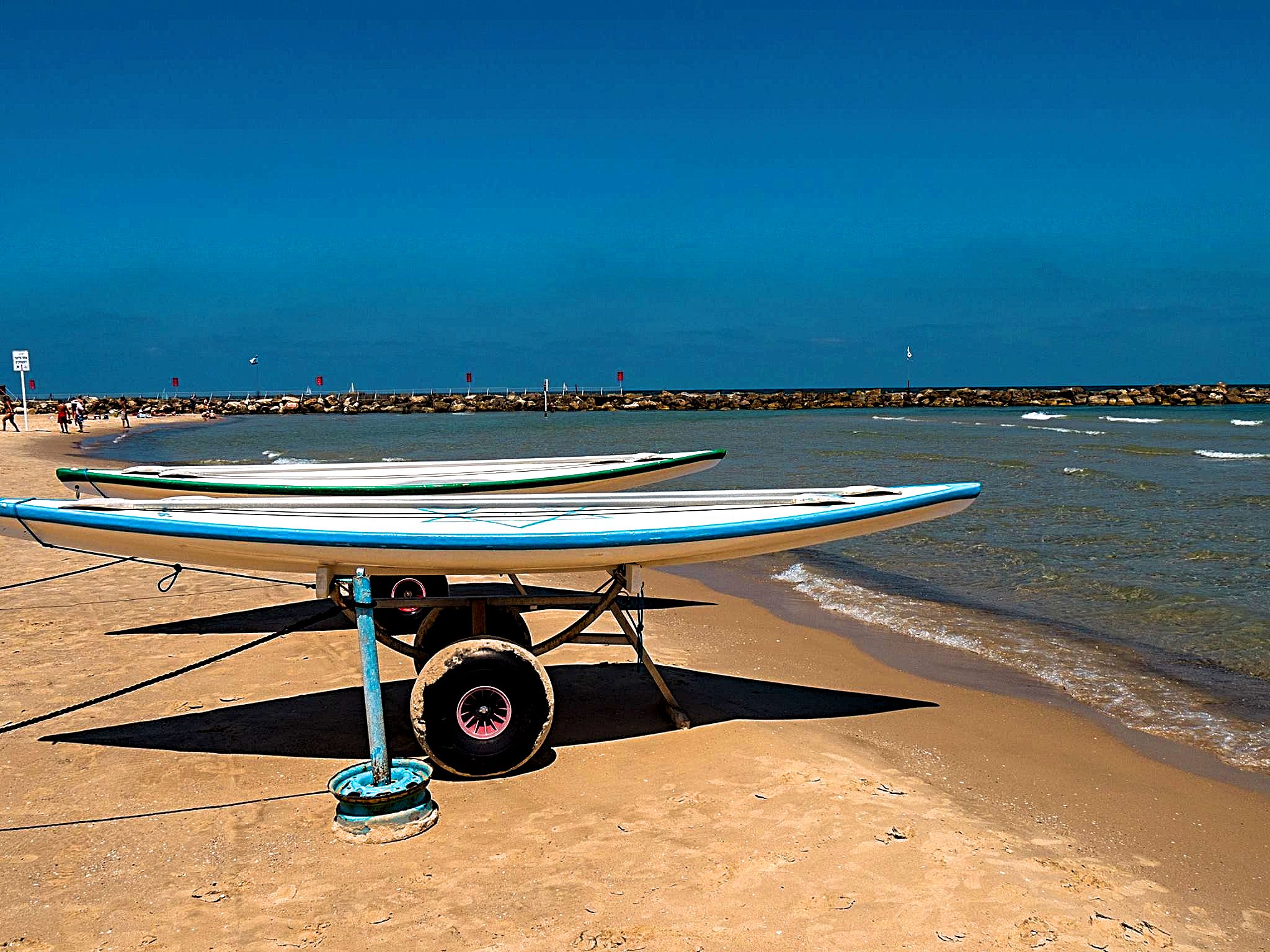 Some of the beaches in Tel Aviv are named after the street which runs down towards the beach. Beach season in Israel is from April to October; during that time most beaches have lifeguards and beach services like sunbed rental and vendors selling ice cream. Here is a guide which will help you choose which beach is right for you. Starting from in the north at Tzuk Beach and working our way south to Alma Beach.

Tzuk Beach (literal translation: Cliff Beach) is the only Tel Aviv beach that is not free but it does have the best facilities. There is only an entrance fee (6-15ILS) during beach season (April-October). The beach is a little too far away to reach from the city on foot and is the northernmost point of Tel Aviv’s promenade which stretches all the way to Jaffa. It is also called Mandarin Beach because of a nearby hotel.

There is a cool bar right on the beach and on a patio area above the sand. There are lawns, benches, showers, changing rooms, and an outdoor gym. The beach is popular with families and middle-older age people plus wealthy residents from nearby Herzliya. Towards the southern end of Tzuk Beach, it is called Sea and Sun Beach. 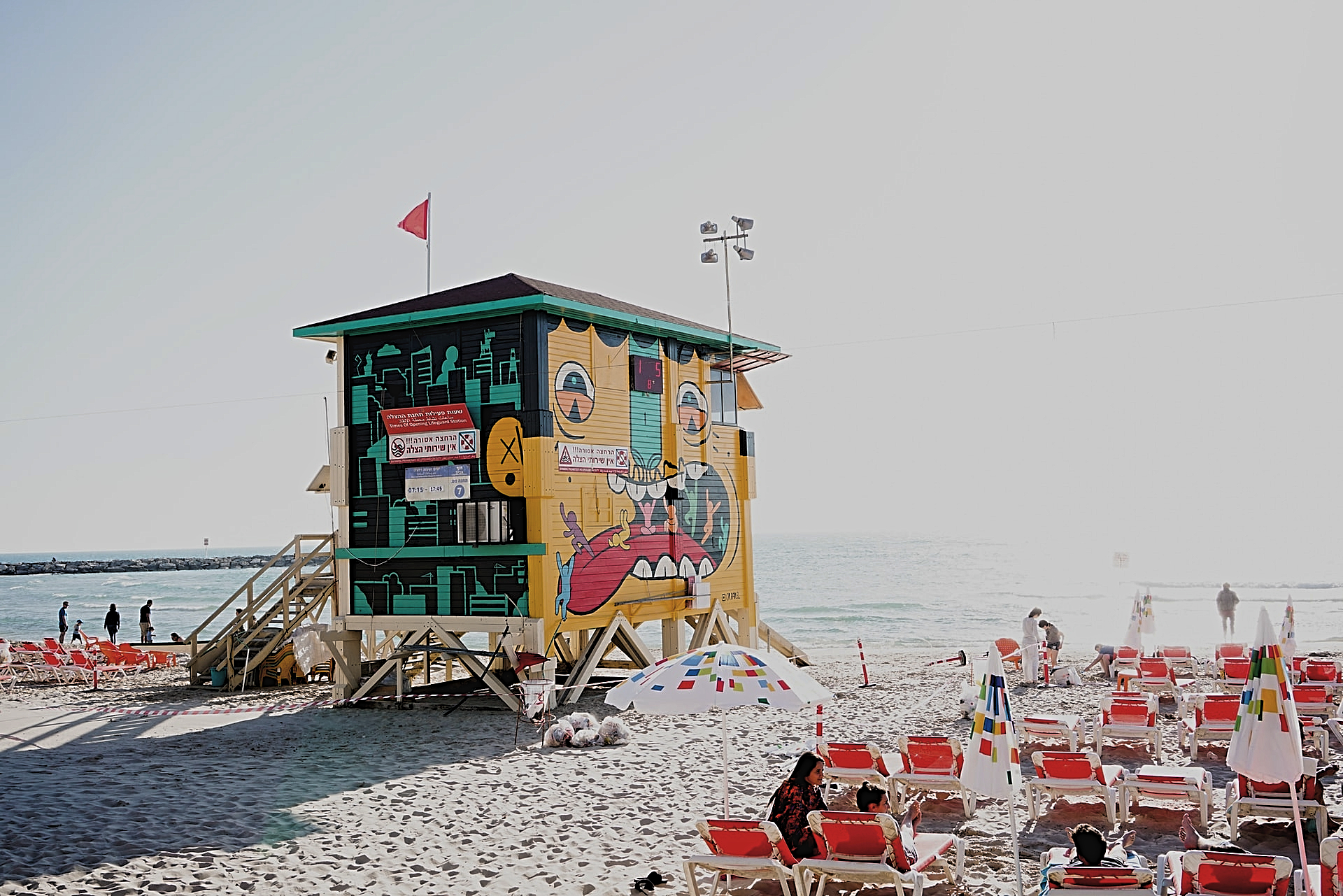 This is one of the cleanest Tel Aviv beaches and it is popular with families with kids (although it used to be the hangout of local “working” girls). Because of the curved natural bay, the water is calm here and perfect for those less confident about their swimming. The beach is wide, clean, and sandy. There are an outdoor gym, lawns, and beachside restaurants and cafes.

The lawns are a popular BBQ area and people hang out here late at night around the BBQ. The southern part of the beach is dog-friendly and if you continue walking you reach a bridge crossing the Yarkon River and leading to the old Tel Aviv Port The port area is a retail and entertainment venue with a gorgeous deck boardwalk, stores, a fresh produce market, and restaurants. 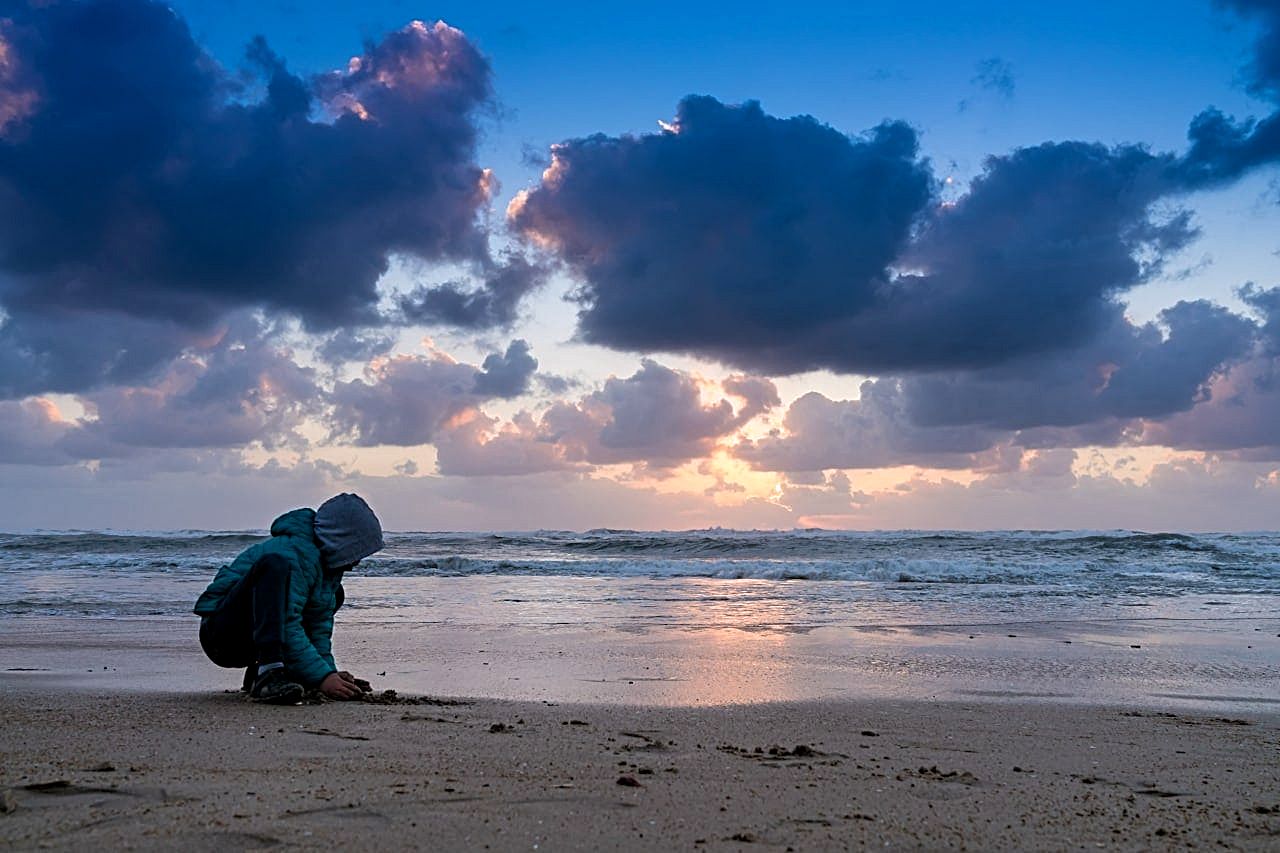 Also called Sheraton Beach (because of the proximity of the former hotel) this beach is named after an iconic 1970s Israeli movie “Metzitzim which means peeping tom or people who watch other people secretly. The film stared Uri Zohar and Arik Einstein and was set on this beach. This is the most northerly of the beaches reachable on foot from central Tel Aviv. Metzitim is just south of the Tel Aviv Port area and has recently undergone a face-lift.

The beach has showers, toilets, a playground, volleyball courts, an outdoor gym, and a beach bar which is open in the evening. The northern part of the beach is popular with families while further south you’ll find teens and 20-somethings sunning themselves. There is a 24/7 restaurant during beach season and important sports matches are often shown on big screens set up on the sand. 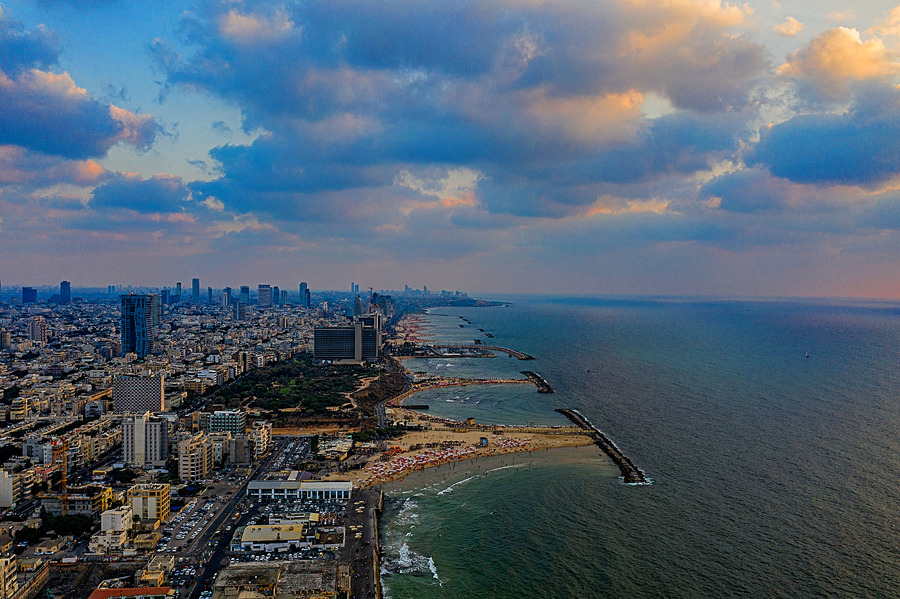 The Separated Beach (Hof HaNifrad, Hof Ha Datim, or Nordeau Street Beach) is a beach where there are separate days for orthodox religious females (and those looking for a male-free beach) and other days when the beach is reserved for males. This beach is used by the religious community and is sometimes called the Religious Beach. During the week the beach is open until 5 pm. On Friday evenings after sundown and Saturdays until sundown when the religious do not go to the beach, the Separated Beach is used by both men and women.

Independence Beach is also known as the Gay Beach as it is frequented by Tel Aviv’s thriving gay community but of course, everyone is welcome. Tel Aviv is a very liberal city with a respected, large gay community. It is named after Atzmaut Park (Independence Park) which is a small park on a hill overlooking the beach that used to be best known as a place for gay hookups. This is not officially a beach reserved for gay people but is just a popular gathering point for the community. The southernmost part of the beach is dog-friendly where dog owners can go with their pets. 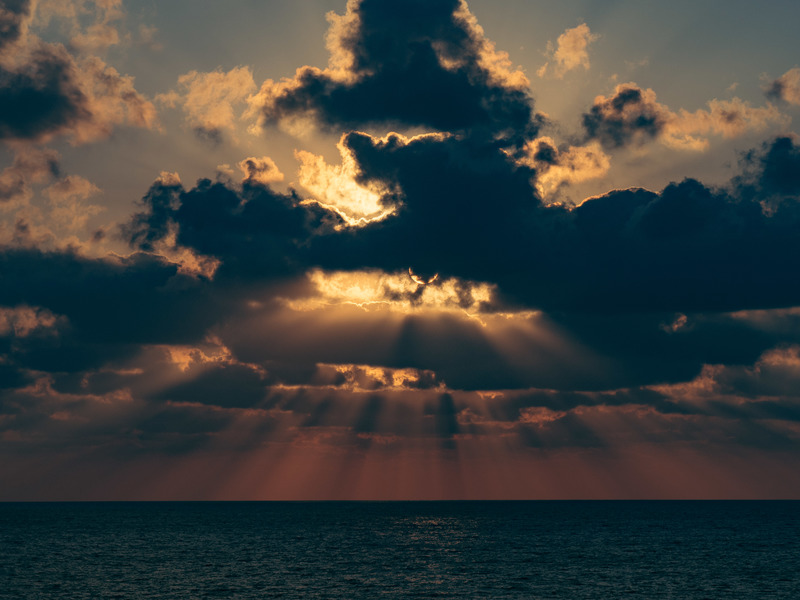 This beach is named after the nearby Hilton Hotel and is left of a breakwater which creates a calm pool of water. This is great for relaxed swimming but also attracted boats and kayaks. You can walk out onto the breakwater right into the sea. The TopSea Bar serves people on Hilton Beach and there is comfortable seating on sofas. TopSea is also the name of a surfing/kayak/paddle boarding school on this beach.

Hilton Beach is one of the most popular Tel Aviv beaches. Tourists come here from several nearby hotels. The southernmost end of the beach is popular with surfers and is called “Hof HaGolshim” or Surfers Beach. The beach hosts the Israeli Triple Diamond Strongman Surfer’s Competition. South of Hilton Beach is the Tel Aviv Marina where you can rent surfboards, windsurfers and take a cruise. 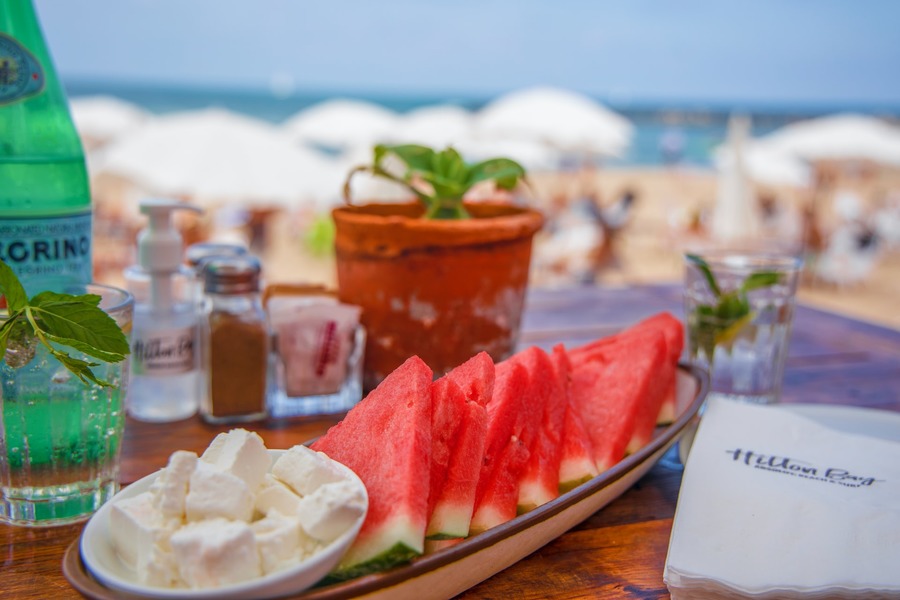 Gordon Street runs down towards this beach and on the land above the beach is the Gordon (seawater) Swimming Pool. The pool is surrounded by a deck and you have views of the sea and marina from the pool. Here there are toilets (for a fee), a restaurant an ice—cream stand, a beach bar, and Lalaland Café right on the beach. This beach also has some gym apparatus on the beach.

Adjoining Gordon Beach is Frishman Beach (they are referred to separately and as one beach). Frishman is near the Dan Hotel and the US Embassy and is one of the cleanest stretches of beach where you can rent beach sunbeds. All three of these beaches are very wide and usually crowded with tourists as they are near to many hotels. Frishman has volleyball courts. The Tel Aviv promenade boarders the beach and across Yarkon Street are many great cafes and restaurants. Bograshov Beach is a continuation of Frishman and like Gordon and Frishman is named after the street which runs down towards the beach.

South of Bograshov Beach is this beach bordered by the promenade where you can see a distinctive statue that resembles a monkey on its head on top of some kind of pod (you decide!). Trumpeldor Beach is an unofficial beach so you won’t find lifeguards on duty here even in the summer season. Thanks to the lack of lifeguards or facilities it is a very quiet, uncrowded beach. 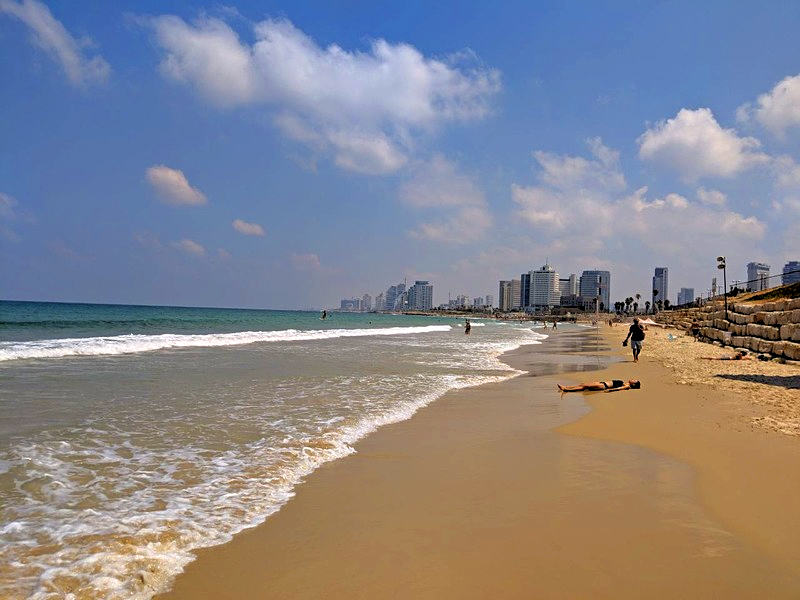 Also known as Geula Beach it is not a crowded beach and attracts fewer tourists.

A little bit south of the Opera Tower is this tranquil beach where you can relax and enjoy a drink at the Banana Beach Bar. The beach has a surf school at the northern end and a more hippie-like atmosphere towards the south. This beach is more popular with locals than tourists and you can see Tel Aviv’s hipsters and yuppies hanging out here reading, doing yoga, or playing backgammon.

Unfortunately, there is no longer a dolphinarium here. Only the remains of the old dolphinarium building. The beach is not that well maintained but on a Friday you can enjoy drum sessions on the sand. Drummers gather to jam together as the sun goes down on a Friday and enjoy a drink from the nearby pub and from Chinky Beach Bar. For this reason, the beach is also called Drummers’ Beach (Hof HaTofim). The drummers are joined by those practicing their capoeira jugglers and dancers. 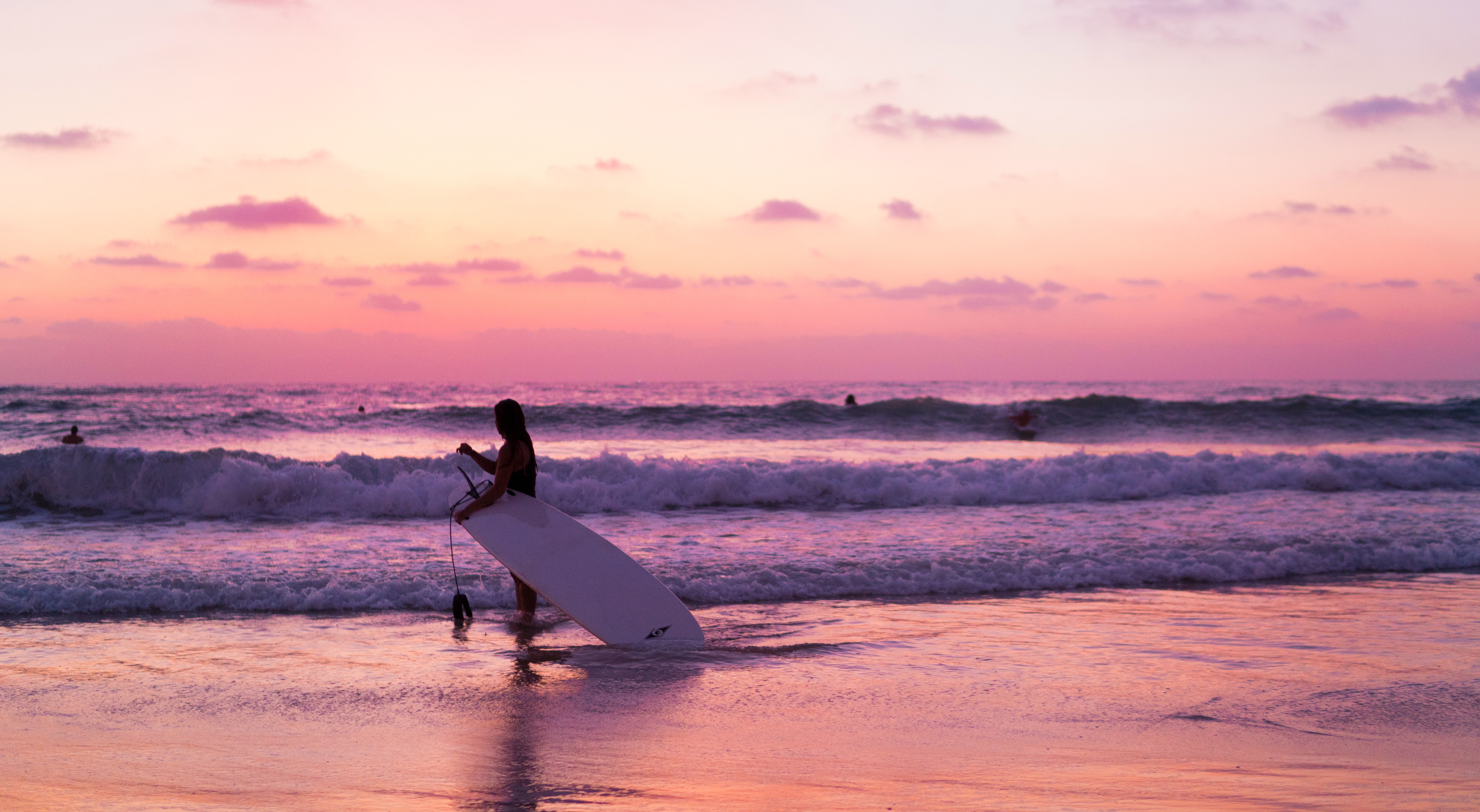 Ending a surf session on a Tel Aviv beach. Photo by Chen Mizrach on Unsplash

This beach is also called Park Charles Clor Beach as it is on the edge of the park at the foot of the cliffs which lead up to Old Jaffa. This beach forms a long narrow strip bordered by green lawns and playgrounds. Families come here to BBQ and couples come here for the romantic sunsets.

The beach is popular with residents from the Arab community in Jaffa as well as Jewish locals. The southern end of the beach is unofficially dog-friendly. Alma Beach does not have lifeguards and is a quiet and laid-back beach.

To see the list of all beaches in Israel feel free to read this article. Besides beaches, there are a lot of things to do in Tel Aviv, including amazing Tel Aviv tours, visiting museums, and cultural venues. 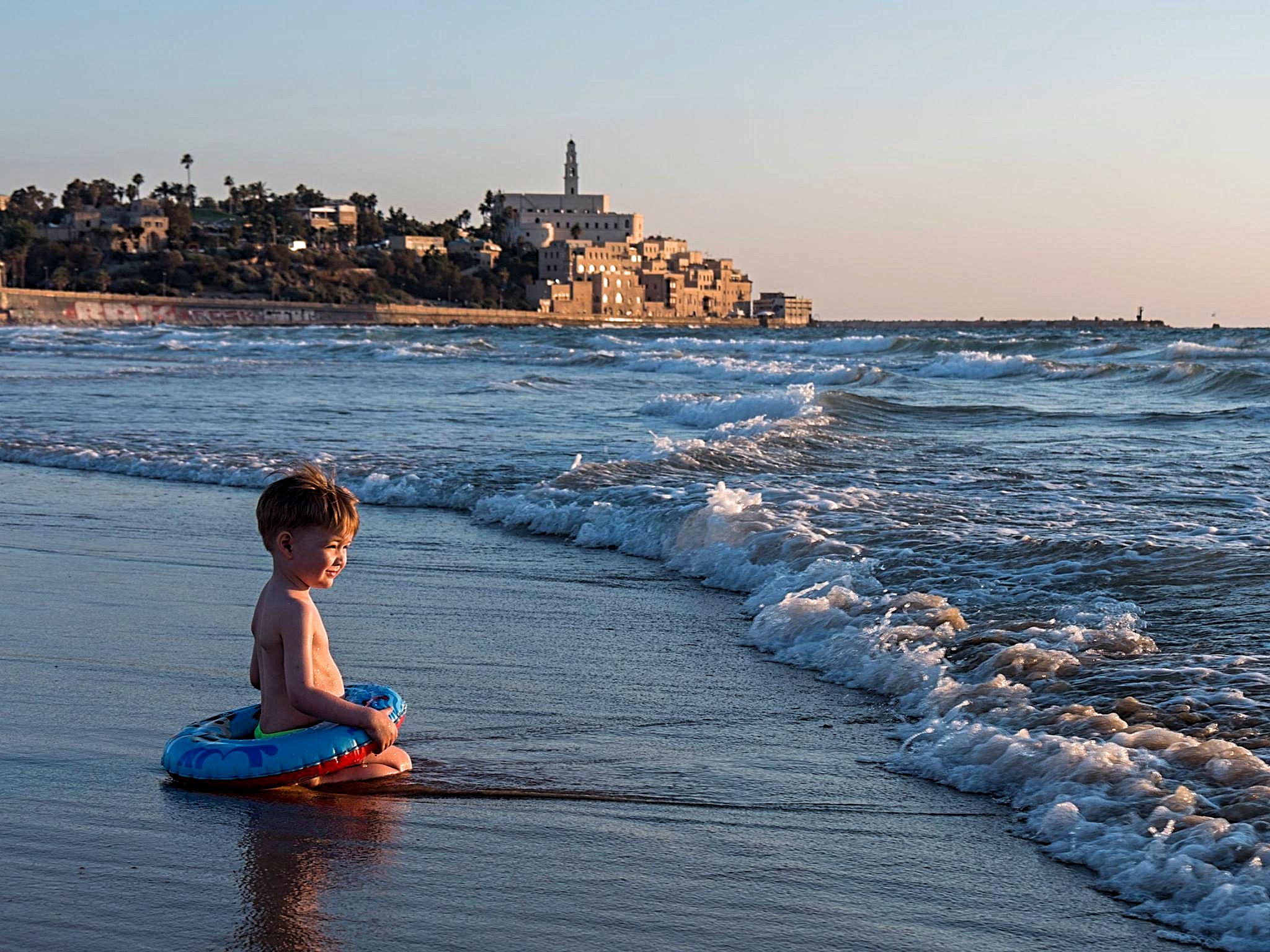