Jerash is a city in Jordan located 48m north of the Jordanian capital, Amman in the Biblical hills of Gilead. The modern city has grown up alongside the remains of an ancient city that can be traced back to the 1st millennium BC when the settlement was called Garshu. The name was later changed by the Romans to Garasa and eventually to the present Arabic name of Jerash. The remains of the ancient city are rivaled only by those of Petra and Jerash is considered one of the largest and best-preserved examples of a Roman provincial town outside of Italy.

In 63 BC, the Roman General Pompey conquered Jerash from the Greeks; the city grew and gained importance as a stop along the trade routes. At its prime, Jerash was home to about 25,000 residents. Jerash had its golden era under the Greeks and then the Romans when it was one of the ten Roman cities known as the Decapolis League. This league of semi-autonomous cities is mentioned in the Bible. During the Byzantine Era, Jerash became predominantly Christian and many churches were built. Following the Christians, Jerash was taken by the Persians and then the Muslims in the 7th century. An earthquake in the 8th century left the city uninhabitable and it was abandoned. The ancient city lay hidden by desert sand until being rediscovered in the 1800s and excavated in the mid-1900s.

What to See in Jerash

The modern city of Jerash and the ancient ruins are separated by Wadi Jerash with the modern city to the east. Careful urban planning has prevented the modern city encroaching on the ancient sites. When visiting the ancient ruins of Jerash the first sight that meets you is the massive South Gate; a triumphal archway with three openings. The gateway was constructed in anticipation of a visit from Hadrian in 130 AD. The hippodrome was built in the 2nd century for large events, chariot races and horse races. The hippodrome measures 245m by 52m and could seat 15,000 spectators. Today there are regular costumed reenactments of Roman battles and chariot races.

Continuing into the city there is the Temple of Zeus which stands at the south end of the city’s main street, the Cardo, flanked by rows of tall columns. From the temple you can look out across a large colonnaded plaza; ancient Jerash’s Forum, used for public gatherings, special meetings and events. Not far from the oval-shaped Forum is the massive and pristinely preserved South Theatre; an amphitheater that can seat over 3,000 spectators. The amphitheater was built in 81AD-96AD and is still in use today. From the Forum the Cardo extends north for 800m in the direction of a hilltop where the Temple of Artemis looks down on the city. The tall elaborately carved Corinthian columns of the temple have survived. Other sites in ancient Jerash include the North Theatre constructed in 165 AD and enlarged in 235 AD; it is smaller than the South Theatre and was most likely used for government meetings.

The ancient remains continue with an open-air altar; Vaulted Gallery; former fountains; markets; Nymphaeum; bathhouses and more. The site has a museum and visitor center. Among the ancient Roman ruins are the remains of over 20 Byzantine churches constructed sometime between 368 AD and 611 AD. Among the most interesting of the churches are the Cathedral, Jerash’s oldest Christian place of worship built on a former pagan temple; the Church Complex of three adjoining churches; St. George’s Church and the Church of St. John the Baptist where you can still make out some of the church’s original mosaic floor. The Church of Sts. Cosmas and Damian feature a magnificent mosaic floor featuring images of plants, animals and the saints.

If you want to visit Jerash, join one of the Jordan 3-4 Day Packages. 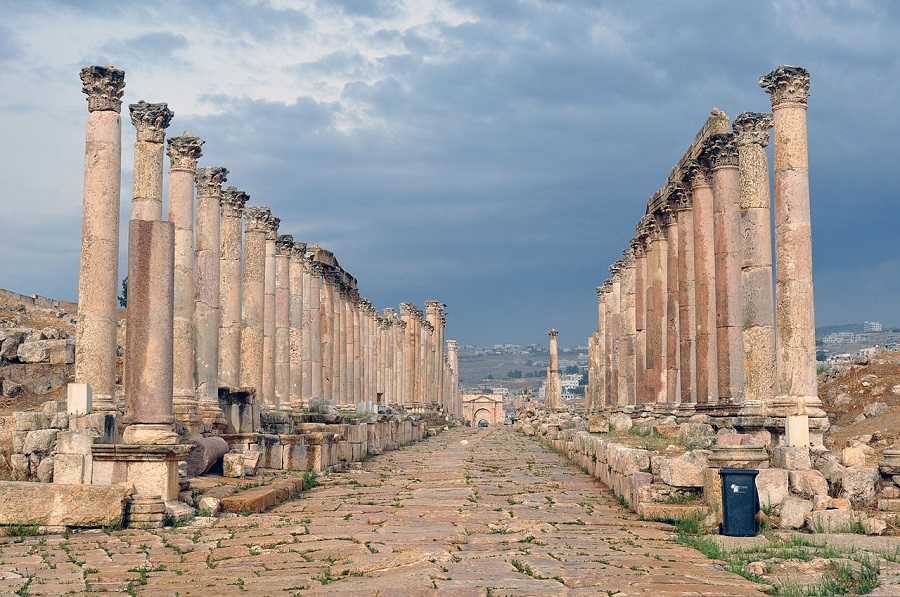