Staying at a Herzliya Hotel

When choosing where to base yourself on a trip to Israel the obvious choice is either Tel-Aviv or Jerusalem but there is another attractive option – Herzliya. Herzliya is a city on the coast about 20 minutes north of Tel-Aviv. The main coastal road (route #90)and railway tracks divide the city in to who halves. Inland you have the main centre of the city and the residential area. Across the main coastal road and along the beachfront you have Herzliya Petuach which is one of the most sort after residential areas and a hub for tourists, revelers and beach-lovers. Herzliya Petuach is also the industrial area of the city but it has evolved from industry into a dynamic center for nightclubs and chic eateries. 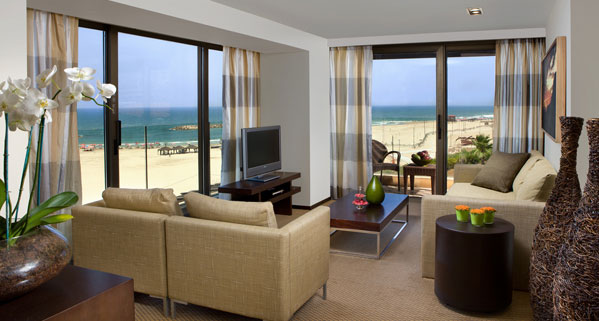 If you choose to stay at a Herzliya hotel it will most likely be one of those along the beachfront. The hotels are all of a high standard (4 to 5 stars) and have the added advantage of the sea right on their doorstep. It literally takes minutes to walk from any of the Herzliya beachfront hotels down to the sea

Herzliya is conveniently located within easy access of the main coastal road which can take you to Tel-Aviv or north to Haifa and beyond. The Herzliya train station connects to Ben Gurion and other cities in Israel. There are many regular buses and taxis available. In addition, tour companies pick up groups of tourists from the Herzliya hotels. By foot, you can walk up and down the coastline along the sand.

If you intend to unwind, relax and soak up the sun then Herzliya is a great place to base yourself. You can see the rest of the country with daily tours where you are picked up from your hotel but the rest of the time you can enjoy the beach and hotel amenities. Just a few minutes away is the Arena Mall which faces the Herzliya Marina.

There are many top stores here as well as restaurants which have brilliant views over the yachts and boats in the marina. From the marina, you can go on boat excursions, try deep-sea fishing or take a kayak out on the water. In the evening head for Herzliya Pituach’s many nightclubs, wine bars, karaoke bars, and restaurants. Herzliya Pituach is also home to an outlet mall where you’ll get great bargains on brand-name fashion items.