If you’re lucky enough to be in Israel during Purim you will enjoy the festive atmosphere, parties, fancy dress and parades. Purim is perhaps the most joyous Jewish holiday. Purim in Israel occurs in March or April – the date changes each year as it is determined by the Hebrew lunar calendar and not the Gregorian calendar. Although Purim is a Jewish holiday it is not observed like a Shabbat in Israel and businesses and attractions have regular open hours. Purim is a normal working day in Israel although it is a school holiday. Purim in Israel is celebrated by secular and religious Jews alike.

Purim celebrates an event in Jewish history which is told in the Biblical Book of Esther. In about 357 BC the king of Persia, Ahasuerus scoured the land for the most beautiful women to make his wife. The woman chosen was Esther, cousin and ward of Mordechai. Esther was forced to marry the king but she hid the fact that she was Jewish. Shortly afterwards Mordechai heard of a plot to assassinate the king and he had it reported and stopped.

Meanwhile the villain of this story, Haman was appointed Prime Minister and he undertook to get rid of all the Jews. He had them draw “lots” (Pur in Hebrew, hence the name of the holiday) to decide the day of their annihilation. Hearing of Haman’s plans Mordechai sent a message to Esther asking her to appeal to the king for mercy for the Jewish people.

That night the king could not sleep and so he sat up reading from the Royal Chronicles. Here he read of the time Mordechai saved him from an assassination attempt. In the meantime Haman had decided to have Mordechai hung for not bowing before him. So Haman had gallows erected and went to the king to ask permission to hang Mordechai.

The king asked Haman how such a loyal man should be honored. Haman, thinking the king was referring to him said the man should be dressed in fine clothes and led on horseback through the streets. The king ordered Haman to give Mordachai this honor. Although furious Haman had no choice but to follow the king’s orders.

How is Purim Celebrated in Israel?

Next Ester appealed to the king, told him of Haman’s plan and asked for mercy on her nation. The king ordered Haman hung from the gallows that had been built for Mordechai and Mordechai was made Prime Minister. Although the king’s decree could not be rescinded he gave the Jews permission to defend themselves. The Jews killed their enemies on the 14th of Adar and on the 15th they rested and celebrated. A holiday was established in memory of this historic victory.

The religious community fasts on the day before Purim. At the end of the fast, after nightfall Jews gather in synagogues to hear the reading of the Book of Ester. After synagogue and the following day there are celebrations, parties and parades. The parades take place in almost all Israeli cities and are often before the actual day of Purim or a few days later, depending on the weather and day of the week. 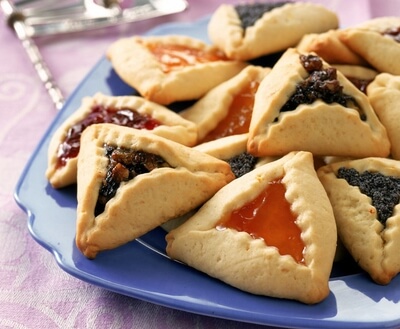 Purim Foods - Hamantaschen (also called  oznei Haman or the ears of Haman in Hebrew) are triangular cookies filled with poppy seeds, jam or chocolate. In Israel you will see these delicious cookies on sale at every bakery and supermarket.
Gift Giving - It is traditional to give food hampers (mishloach manot) to friends, family and those less privileged than ourselves.    These hampers usually hold wine, cookies, chocolate, nuts and other goodies.
Fancy Dress - Kids and adults in Israel dress up in fancy dress during Purim. There are Purim fancy dress parties in bars, pubs, night clubs and private venues. The symbolism of the costumes is to show that God was behind the Purim miracle but his involvement was masked.
Getting Drunk - Believe it or not it is even a Purim tradition to get drunk! This originates from a passage in the Talmud which states:” A person is obligated to drink on Purim until he does not know the difference between “cursed by Haman” and “blessed by Mordechai.” So it is a “mitzvah” or good deed when you drink too much during Purim!

Things to See and Do in Israel during Purim

There are many special events in Israel during Purim. Purim is one of the most exciting holidays for nightclub. There are many fancy dress parties held in top nightclubs across the country. The main attraction during Purim is the Adloyada or Purim Parade. Parades are held in most cities but the most famous Purim parade takes place in Holon, a short drive from Tel Aviv. The parades include parade floats, costumed performers, dancing and music. Be’er Sheva also holds a great Purim event in the streets of the Old City.

The main Purim event in Tel Aviv is a street party held in Kikar HaMedina. It is a huge event with live musical performances, market stalls, dancing , singing and great food. Tel Aviv is also the site of the Purim Zombie Walk. Locals (and visitor) dress up as zombies and walk through the streets starting on the corner of Ben-Zion Blvd and King George Street.

Purim is celebrated a day early in Jerusalem and other “walled” cities but the celebrations continue throughout the Purim week. To enjoy Purim in Jerusalem head for Safra Square for family-friendly events like circus acts, a costume competition and arts and crafts workshops. There will be performances by top Israeli musicians and TV stars.

In Jerusalem’s Sacher Park there will be a fun event with food stalls, music and live shows from 10am. Special Purim events are held at a number of Jerusalem and Tel Aviv museums including the Israel Museum, Bloomfield Science Museum and the Tower of David Museum. Although most of the Purim parties have yet to be announced you will probably find Purim fun at Jerusalem’s Nachalot Street Party. This street party is on Nisim Bachar Street, Jerusalem and entrance is free.