The Second Temple was originally built in 516 BC but was drastically altered and expanded under Herod the Great from 37 BC to 4 BC. It was during this reconstruction that the southern side of Temple Mount was fortified. The southern retaining wall of Temple Mount would have risen 32 meters above street level and run for a length of 281 m. The Temple and almost all of the Temple Mount structures were destroyed by the Romans during the Jewish Revolt of 66 AD-70 AD. 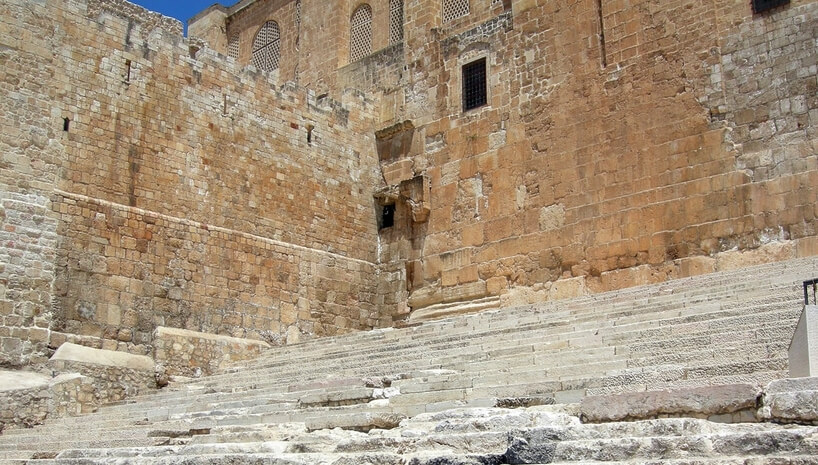 Running the length of the wall would have been a paved street lined with stores. Along the wall remains were uncovered of an 8 meter wide street now known as the Herodian Street. When the Herodian Street was discovered it was cleared of a mountain of rubble that had accumulated over the almost 2,000 years since the temple’s destruction. On one side of the ancient Herodian Street the massive Temple Mount Southern Wall rises 32 meters and on the other side of the street a wall was uncovered with openings where there would have been stores. Here pilgrims could buy offerings to sacrifice in the temple and also visit the money changes. It may have been here in these stores that Jesus “cleared the temple courts of people selling cattle, sheep, doves and people sitting at tables exchanging money” (John 2:1322). As the Roman’s set about destroying the temple in 70 AD they would have toppled down massive stones onto this street. Above the stores we can see the remains of the base of a staircase.

Halfway up the side of the Southern Wall are the remains of the Robinson Arch (named after the researcher who discovered the arch in 1838). The arch was part of a large bridge structure which allowed access from the lower city to the Temple Mount. The arch was part of a 13 m wide and 19 m high walkway giving pilgrims access from the Herodian Street up a wide flight of stairs to the south-western Temple Mount entrance. This would have been one of three such bridge walkways into the temple. Only the small section of the arch attached to the Southern Wall and the base of the staircase have survived.

On the southwest corner of the Southern Wall a large slab of stone was found inscribed with the Hebrew words meaning: to the trumpeting place to proclaim. This could refer to the place where a priest would stand on the walls and blow a trumpet to announce the approaching Shabbat. The stone may have been thrown down from the temple walls during the destruction.

While excavating the Southern Wall many ritual baths (mikvah) were found. The baths are located close to the walls and were built according to Jewish laws. The baths would have been used by thousands of pilgrims to purify themselves before they entered the temple.

Later Structures at the Southern Wall

The Al-Aqsa Mosque was built in 705 AD and stands along the inside of the Southern Wall; you can see the mosque’s distinctive silver dome above the wall. Along the Southern Wall it is possible to see the remains of several structures from the later Arab Period including a number of Umayyad Palaces.