One of the fun things my family does during August in Israel is to go out into the nearby farmlands, in the middle of the night, and watch the Perseid meteor shower. To get the best possible view of any meteor shower you need to be away from city lights, preferably in an elevated place, in a dark area and of course be in the right place at the right time. 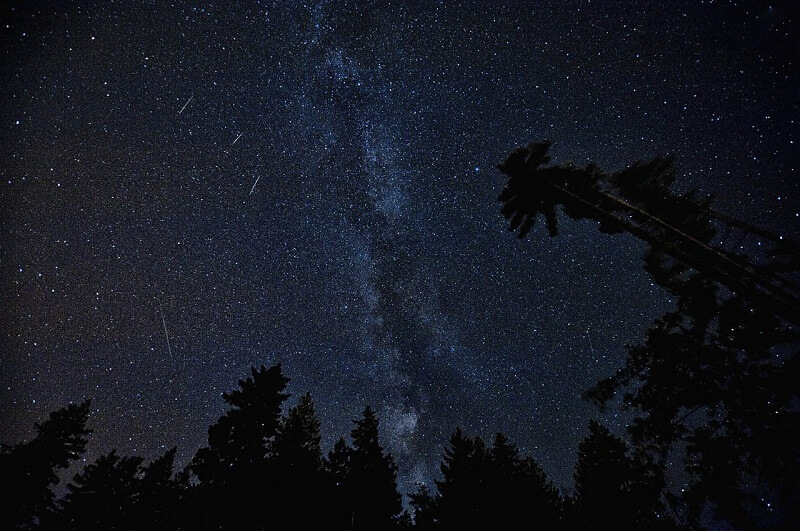 Where to See Meteor Showers in Israel

So if you’re looking for a place away from the city lights to spot meteors in Israel then there are a few well known and popular places where groups gather each year to watch the spectacle. In 2012 about 9,000 Israelis gathered at Mitzpe Ramon in the Negev to watch the Perseid meteor shower.
The 914.4m high location makes it even easier to spot the meteors which fall at a rate of one a minute. Club Ramon, in Mitzpe Ramon offers a 3 day program which includes accommodation, entertainment, walking tours and guided sky gazing to see the meteors.  The city of Mitzpe Ramon even dims the lights at night to make it possible for the many visitors to get a better look at the meteor shower. If you’d rather have a company handle the logistics of getting to a good viewing spot then there are several options. Astronomy Israel offers Naked Eye and Telescopic Tours of the Night Sky from Mitzpe Ramon. The nearby Arava Desert is another great place to see meteor showers in Israel, mainly because of the intense darkness. In Eilat astronomer Eitan Schwartz takes groups 10km out of the city to a place near Be’er Ora where they can see the shower and even camp under the stars. The Golan Heights and Galilee are also elevated points where the showers can be seen well.

The Most Stunning Meteor Showers in Israel

From mid-January to mid-April there is no significant show of meteors but after that there are several showers worth seeing. The Lyrids Meteor Shower is in late April (April 16th-25th in 2014) and can reach 100 meteors an hour but averages about 10 – 20 an hour. The Aquarids Shower occurs in early May in Israel (April 19th to May 28th in 2014 with peak on May 5th) this shower can have up to 30 meteors an hour at its peak.
Perseid Meteor Shower, this is perhaps the most visible meteor shower in Israel and up to 60 meteors can be seen an hour. The shower runs from July 17th to August 24th with the peak in 2013 on the night of August 11th. 2013 is set to be one of the best years to see the Perseids in Israel as the moon will set not long after midnight leaving a dark sky. The best time to see them is between 11:30pm and 4:30am.
Delta Aquarids shower, late July to early August (July 12th to August 23 in 2013 with peak on July 27th) can best be seen after midnight. There can be up to 20 meteors an hour.
The Orionids meteor shower in October peaks on October 21st and 22nd and can give a bright show.
Draconids meteor shower in 2013 is set to be one of the most spectacular showings ever with up to 750 meteors an hour! The shower runs from October 6th to 10th and peaks on the 8th and 9th.
Taurids peaks on November 4th and 5th and is a minor meteor shower and the Leonids gives an average showing peaking on November 16th and 17th but in 2013 will be hard to see because of the light from the full moon.
Quadrantids, late December early January (January 1st-5th in 2014), there is usually not a strong showing of this shower in Israel but the shower can reach up to 40 meteors an hour. Look in the direction of the Bootes Constellation.