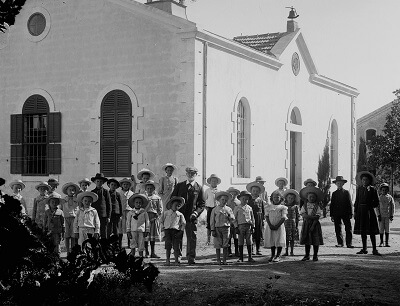 In 1866 a group of 157 men, women and children of the Christian Lovers of Zion left Maine and traveled to Palestine. Their mission was to develop the Land of Israel and prepare Palestine for the establishment of a Jewish nation in the Promised Land. As soon as their leader George Adams had purchased land they began building one of the first neighborhoods outside of the walls of Jaffa.They built in the New England wood and clapboard-style using prefabricated structures they had brought with them from Maine.
Their settlement was not easy. Many died, the land was difficult to farm, there was fighting among the settlers and their resources were limited. Just two years after their arrival there were only approximately 24 of the original American settlers remaining.

A few years after the Americans abandoned the fledgling Tel Aviv neighborhood the German Templers arrived in Jaffa in 1869. They bought the abandoned colony homes and took up residence. Led by Pastor Hoffman the Templers aimed to prepare Palestine for the Second Coming. A large property at#8 Auerbach Street was sold to the Templers in 1871 and became Tempelstift, the Templer headquarters which is known today as Beit Immanuel. In 1904 the Templers built the Immanuel Church. During the Second World War many of the German Templers in Palestine became Nazi sympathizers and were expelled by the ruling British. The abandoned colony fell into disrepair. By the 1980s the American-German Colony houses were scheduled for demolition. Thanks to the efforts of American historian Reed Holmes and his wife Jean Carter the colony was preserved.

What to See and Do in the American Colony

The Tempelstift was constructed at #8 Auerbach Street in 1873 housing the Templer offices, community hall and school. In 1878 the Templers moved their headquarters and sold the property to Baron Plato von Ustinov (the grandfather of actor Peter Ustinov). Ustinov added a second floor to the building and made further architectural changes. Ustinov took up residence on the top floor and the building became the luxury Hotel du Park in 1895. It hosted many famous guests including Emperor Wilhelm II in 1898. Later the hotel was sold to the London Society for Promoting Christianity among the Jews. In the 1970s the property became a gathering place for Messianic Jews. Today it is a guesthouse, mission and community center. Beit Immanuel Guest House has a room which holds displays on the history of the American-German Colony.

Another of the standout buildings is the Grand Hotel constructed by the Drisco brothers alongside the Hotel du Park at #6 Auerbach Street. The three storey building was the first stone structure in the Tel Aviv neighborhood. It was later bought by Ernest Hardegg, the son of one of the original Templer settlers and he renovated the property and reopened it as the Jerusalem Hotel. The Jerusalem Hotel operated from 1870 to 1940 and was the first luxury hotel outside the Jaffa walls. The historic hotel has recently undergone intensive renovations and will soon reopen as the Drisco Hotel.

The home of Ackley Norton at #4 Auerbach Street was one of the largest homes in the neighborhood. Norton was a wealthy ships’ captain and many festivities and parties were held in his home. The two storey wooden house built in 1866 became a religious mission in 1926; it housed the first state-sponsored haute-couture brand, Maskit in the 1950s and later the legendary Keren Restaurant. The Norton House will soon reopen as part of the newly renovated Drisco Hotel.

The Immanuel Church on Be’er Hoffman Street towers above the low-level homes of the colony. It was a later addition to the community, completed in 1898. Not long after its completion the church became the German Evangelical Church serving the Templers and Evangelists in the community. The restored and renamed Immanuel Church has been home to the Norwegian Lutheran church since 1955. The church is open to visitors Tuesday to Friday 10:00 to 14:00. 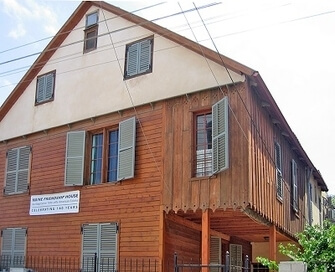 The house at #10 Auerbach Street was built in 1866 by the original American settlers using one of the wooden structures brought from Maine. In the 1890s the Templers doubled the size of the house with a stone addition. Jean and Read Holmes purchased the old colony house in 2002 and began restoration. Today it is the Maine Friendship House and site of a museum focused on the American Colony. The museum displays authentic items from the American settlement period including farming equipment and a wooden board carved with the initials of the house’s original owners. You can tour the house and watch an introductory film about the American Colony. The Maine Friendship House is open Friday noon to 15:00 and Saturday from 14:00 to 16:00.