Vegans visiting Tel Aviv won’t go hungry. In fact the city is considered one of the best vegan-friendly cities in the world. Israel has about 200,000 vegan residents, most of who live in Tel Aviv. Vegan in Hebrew is “tivoni” and the concept is generally understood so feel free to ask in restaurants if they have anything tivoni. Here are just few of the many vegan restaurants in Tel Aviv. 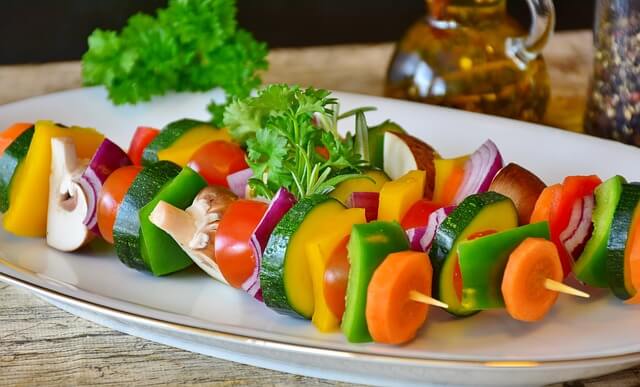 Nanuchka, 30 Lilienblum Street – One of the most interesting additions to the vegan family is Nanuchka, a traditional Georgian cuisine restaurant. For many years the popular restaurant served meaty Georgian dishes until the owner became a vegan in 2014 and converted the restaurant to vegan-only. Now they continue to serve Georgian food but all vegan. The restaurant has a great atmosphere with Communist Era memorabilia and poetry adorning the red walls.

Falafel Banin Johnny, 2 Tchernikhovski Street – This is your chance to taste traditional Israeli fast food. Falafel is made primarily from humus beans but this restaurant offers the dish with the usual frills like salad and fries plus some gluten-free options.

Buddha Burgers, 86 Ibn Gvirol and 21 Yehuda HaLevy– This eatery is a veteran vegan establishment. They serve made-to-order veggie burgers made with a mix of beans, quinoa and rice. You can have soy cheese added to your burger which is rare in Israel because of the kosher laws.

Taste of Life (Taam Hachaim), 35 Ben Yehuda – This vegan (and mostly organic restaurant) is run by the Hebrew Israelite community, also called the Black Hebrews. They are a group of African Americans who believe they are descendents of the ancient Israelites and have a thriving community in Israel. They are usually English speaking and the menu is in Hebrew and English. There is a wide selection of light meals like salads, sandwiches and desserts.

Zakaim, 20 Simtat Beit HaSho’eva – This Persian inspired vegan restaurant is often voted the best vegan restaurant in Tel Aviv. The dishes on offer are based on classic Persian cuisine and the menu is ever changing. The relaxed yet chic décor and open kitchen with eclectic furniture make this a unique and inviting restaurant.

Café XoHo, 17 Gordon – This is a popular hangout for Tel Aviv’s expat community. It is a cozy café with a laid back atmosphere where you are welcome to bring your laptop and use their free WiFi. The food is all natural and all homemade daily. The menu includes vegetarian and vegan options – but a lot of vegan options. The menu is labels so that you know which dishes are vegan and which are vegetarian.

Hatol HaYarok (The Green Cat), 7 Levontin Street – This is a vegan pizza and Italian food joint dishing up delicious pizza which uses cashew-based “mozzarella cheese” which is prepared on the premises. The pizzas are topped with things like yam, seitan, olives and vegetables

Herzog, 48 Ibn Gabirol Street – This restaurant has only recently opened and serves vegan tapas and Mediterranean food prepared by one of Tel Aviv’s top chefs, the owner of Maavar Passage. They are open Monday to Friday from 12:30pm to 4:30pm.

Miss Kaplan, 18 Eliezer Kaplan Street – This is a completely vegan eatery in the gorgeous Serona shopping complex. They serve modern dishes and many flavorsome dishes. It is headed by well known vegan blogger/chefs – Orit Shavit and Shirel Berger.

Rainbow Pitta, 88 Ibn Gvirol Street – Typical Middle Eastern and Israeli food is served here – vegan-style. This is vegan fast food and they serve take-out. They are closed on Saturdays.

Anastasia, 54 Frishman Street – This vegan café serves small meals, great breakfasts, drinks and cakes. They make their own almond, rice and soy milk and serve strictly no junk food. There are also gluten-free items on the menu and raw food items. The café also has a little store selling vegan foods.

Tevaleh, 106 Bograshov Street – This restaurant serves Middle Eastern classics and Israeli food as well as freshly squeezed fruit juices. They have a seated area plus they sell take-out. It is the second of two branches of this restaurant (the first is in Kfar Saba). Among the popular juices is a wheatgrass drink.

Greek Shack, 18 Yedidya Frenkel – This vegan bar is located in the hipster/bohemian neighborhood of Florentine in South Tel Aviv. They serve American-style food including sloppy joe, philly cheese steak, schnitzel, cheesecake and kebabs – but all vegan.

Tenat, 27 Chlenov Street – Here you can try Ethiopian vegan and gluten-free food. There is a great ambiance in this eatery with Ethiopian and jazz music playing in the background. On Monday nights there are live jazz performances.

Alegria, 165 Ibn Gavirol Street – this is a specialty vegan store and restaurant where you can find vegan artisan cheese like cashew-cheddar and other mouthwatering delights. There are daily specials, vegan burgers, salads and sandwiches. There are also spreads, breads and pastries on offer. This restaurant is closed on Saturdays.

Seeds, 97 King George Street – Try a vegan pizza or one of the Middle Eastern dishes. This is also a bakery where you can get a variety of pastries. Also find frozen foods and pre-packed frozen vegan meals for take-away. One of their most popular items is iced coffee.

Dosa Bar, 188 Ben Yehuda Street – Great Indian street food; one of the most popular dishes served is South Indian dosa, a gluten-free pancake with different savory fillings. The dosa comes with soup, a salad and chutney. There are also several delicious desserts. This restaurant is closed on Saturdays.