Good Friday is commemorated on the Friday before Easter Sunday each year and marks the day that Christ was crucified. The Crucifixion of Jesus took place in Jerusalem (on a site now within the Church of the Holy Sepulchre in the Old City) so if you are lucky enough to be in Jerusalem on Good Friday you will have the unique experience of being exactly where these Biblical events took place. Good Friday is marked in Jerusalem by religious services in the many churches and by other unique events. Thousands of Christians come to Jerusalem for Good Friday to take part in the moving events of that day. 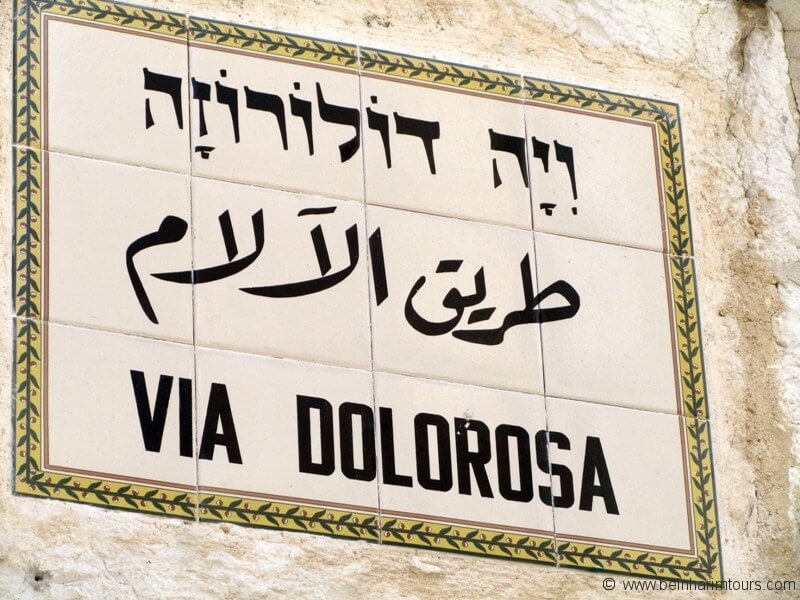 The most major event in Jerusalem on Good Friday is a procession by Roman Catholics and Protestants which retraces the route Jesus took from his sentencing in front of Pontius Pilot to Golgotha where he was crucified. He carried his heavy cross along this route, known as the Via Dolorosa (Way of Suffering or Way of Sorrows)) and paused at 14 points along the way. The places where Jesus stopped along the Via Dolorosa are called the Stations of the Cross. Each year thousands of pilgrims carrying crosses, chanting, praying and singing hymns proceed through the streets of the Old City along the Via Dolorosa led by Christian religious leaders of Jerusalem. At each of the Stations of the Cross they stop to pray. The brown robed Franciscan friars pause at each of the stations to explain their religious significance and chant prayers in Latin. Some years there is someone dressed as Jesus bearing a heavy wooden cross that walks just behind the priests leading the procession. The person taking the role of Jesus wears a crown of thorns and has fake blood dripping from his wounds. “Jesus” is flanked by people dressed as Roman soldiers. The procession ends at the Church of the Holy Sepulchre where Jesus is believed to have been crucified, laid to rest in a tomb and later resurrected on Easter Sunday. Once the procession reaches the Holy Sepulchre where the final four Stations of the Cross are located the pilgrims pause to pray and later that day there are more special ceremonies within the church.

Easter is celebrated on different days by the Orthodox denominations which follow the Julian calendar and by the Catholics and Protestants who follow the Gregorian calendar. Throughout the entire week of Easter there are special events in Jerusalem so if you cannot make it for Good Friday then try to be in the Holy City at some other time during the Holy Week.