Baha’i UNESCO Holy Places in Haifa and the Western Galilee

These sites were named UNESCO sites of outstanding universal value in 2008 for their “profound spiritual meaning and the testimony they bear to the strong tradition of pilgrimage in the Baha’i Faith.” The sites include the faith’s two holiest sites associated with the faith’s founders as well as the surrounding grounds, gardens and other buildings and monuments in the Haifa and Western Galilee region. The locations in this area are important points on the Baha’i pilgrimage route. The holy sites have deep religious significance for the approximate 5 million followers of the Baha’i faith. 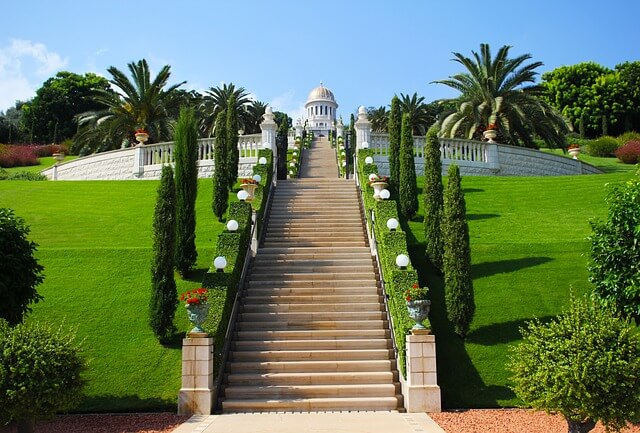 The Baha’i Sites Included in the UNESCO Inscription are:

The basic principles of the Baha’i faith are the unity of religion (that there is only one God); the unity of humanity (all men were created equally) and that the purpose of man is to learn to know God through prayer and reflection. Baha’i followers believe that the leaders of the world’s main religions, including Jesus, Abraham, Moses and Krishna, were all messengers sent by God to educate humanity.
In 1844 the Baha’i prophet-Herald, The Bab, began teaching his creed in Persia, he was subsequently persecuted for his beliefs and executed in 1850. Baha’u’llah, one of The Bab’s followers, became the leader of the faith and was imprisoned in Tehran for his beliefs. After his imprisonment he was expelled to Baghdad and then to Constantinople (Istanbul) and to Adrianople (Edirne). He was finally banished to Acre in 1868, which was part of the Ottoman Empire at the time. Here he was confined in prison and later allowed to live in a home near Acre, under house arrest. He spent 24 years in Acre compiling the scriptures of the faith and eventually died in 1892. His son, Abdu’l-Baha took over as leader of the faith. The faith spread to the western world and following the death of Abdu’l-Baha (1921) the religion was led by an elected body.

The Shrine of Baha’u’llah, Acre

After being released under house arrest in Acre, Baha’u’llah lived in several homes including the Mansion of Baha’u’llah where he lived and wrote most of his great writings. Here he passed away and the house became his mausoleum.  The shrine is the faith’s holiest site and their Qiblih (the direction all Baha’i believers face when praying).

Shrine of the Bab, Haifa

In 1909 the remains of the original founder of the Baha’i faith, Bab, were secretly brought from Persia (Iran) and interred in a tomb built for this purpose and designed by Baha’u’llah on Mount Carmel overlooking the city of Haifa. The tomb was expanded in 1953 and given a golden dome which is now a symbol of the city of Haifa. The tomb overlooks a kilometer of 19 terraced gardens which cascade down Mount Carmel.