One of the most popular tours to Israel is to the city of Bethlehem. This sacred Christian city is one of the top things to do in Israel. Visitors usually choose to take an organized tour to Bethlehem rather than traveling independently due to the fact that Bethlehem is in the West Bank. Reaching Bethlehem involves crossing a border and heightened awareness of security. The Church of the Nativity is Bethlehem’s top attraction and one of the most popular places to visit in Israel.

Site of the Nativity, Bethlehem 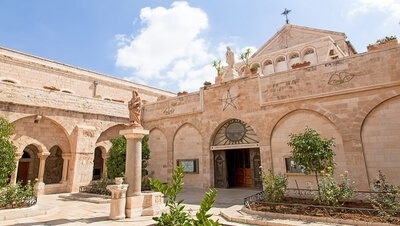 The Church of the Nativity marks the place believed to be where Jesus was born. It was on this spot that the nativity story unfolded. Arriving in Bethlehem for a national census Joseph and the pregnant Mary found no room available. Eventually they
were offered to spend the night in an inn keeper’s manger where he kept his animals.
In the 1st century animals were often kept in caves near or behind the family home. For this reason the “manger” which is encompassed by the Church of the Nativity is in fact a grotto. People often envision the manger as a barn and are surprised to find that it was a small cave or grotto. In the heart of the Church of the Nativity is the Sacred Grotto. A silver star marks the site on the ancient stone floor within the grotto.

History of the Nativity Site

The earliest mention of the manger site in Bethlehem was by Justin Martyr in c.160 AD followed by mention by Greek historian Eusebius of Caesarea. The structure we see today was commissioned by Christian Roman Emperor Constantine and his mother St. Helena in 326 AD. The church was built around the Sacred Cave. The original structure was replaced in 530 AD by a larger church but parts of the Constantinian floor mosaics can still be seen.
Miraculously the church was not destroyed when the land came under the rule of the Persians and later Muslim rulers. During the Crusader era of the 11th century Baldwin I and II were crowned in the Church of the Nativity. Under the Crusaders the church was renovated and redecorated. The church remained untouched under the Mamluks and Ottomans although precious marble was removed by the Ottomans for use in construction on Temple Mount. Today the church is shared by the Roman Catholics, Greek Orthodox and Armenian Churches.

Highlights of the Church of the Nativity, Bethlehem

Features of the church to notice include the Door of Humility, a small entrance floor designed so that you have to bow to enter, thus showing respect. The Ottoman doorway was also intended to prevent looters entering with their carts. The church nave is lined with 44 columns each with paintings of saints and Mary with baby Jesus. The paintings date back to the Crusader era. The majestic columns are made of pink-hued limestone and date back to the 4th century structure. Also see the remains of 12th century wall mosaics and the 6th century baptismal font. Before leaving the church see the 6th century bronze gates at the southern and northern entrances to the Grotto.