Over the years more than 30 Jewish synagogues have been uncovered in the Golan Heights dating back to the 2nd-7th century. In fact the Golan is even mentioned in the Old Testament as Bashan and as the Kingdom of Og. Evidence has been uncovered showing that many Jewish communities were present in the Golan up until the Islamic conquest in 636. Umm-el-Kanatir is one of the significant archaeological site in the Golan where you can see the remains of a 5th century synagogue.

The Umm-el-Kanatir synagogue has been excavated and partially reconstructed so visitors can easily picture the site as it would have been. The synagogue is made of local black basalt stone and dates back to the 5th-6th century. It is 18.28 meters long, 13.1 meters wide and would have reached a height of 12.19 meters. This makes it one of the largest synagogues from that era. The elaborate building, its size and detailed decoration indicates that the community which used the synagogue was probably wealthy.
During excavation of the synagogue archaeologists discovered a lower floor beneath the synagogue which indicates that the structure’s construction could have begun 100 or even 200 years earlier than the 5th century. Visitors to the archaeological site can see the reconstructed walls, the decorative entrance ways, the bima (a raised area where the Torah would have been read) and two rows of five columns which would have supported the roof. Significant architectural details associate the building with Judaism including the carved menorah and shofar on two of the column capitals, the four meter high bima and an ark-like space.  The Umm-el-Kanatir synagogue is unique in being the only Golan and Galilee ancient synagogue discovered with a bima and ark. Another special feature of the synagogue is that it had an upper level. 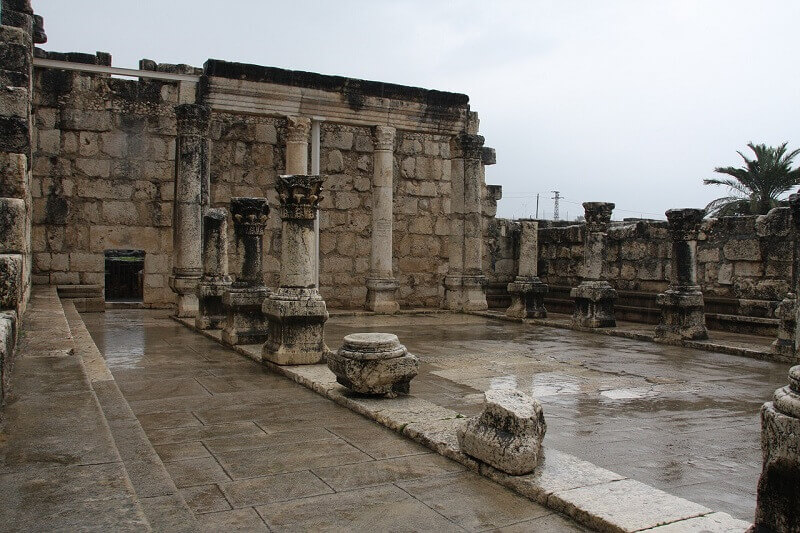 capernaum synagogue
Near the synagogue is a natural spring which runs into three basins which were covered with three Roman monumental arches, one of which still remains. Pagan statues may have filled the spaces between the arches. Near the spring are the remains of an ancient Jewish flax factory which would have used the water to wash the flax. The flax industry may account for the prosperity of the Jewish community in the 5th century and the Roman arches explain the name Umm-el-Kanatir which means “mother of arches” in Arabic.
The ancient synagogue would have been used by the villages of Umm-el-Kanatir until 749 when an earthquake destroyed both the synagogue and most of the village buildings. The synagogue lay in ruins following this natural disaster and was used for grazing cattle. Some of the building’s stones were used by Syrian shepherds to construct shelters and the site was left unexplored until the 1960s. For lovers of archaeology, ancient history, Jewish heritage and pristine countryside the Golan Heights offers plenty of sites to discover including the unique synagogue at Umm-el-Kanatir. Umm-el-Kanatir is located off of route #808 southwest of the town of Haspin close to Kibbutz Natur in the Golan Heights in north-eastern Israel.