Just 5 minutes from the congested downtown area of Tel Aviv is a restored historic train station which has been turned into a trendy entertainment and retail hot spot. HaTachana (The Station) was the terminal for the Jaffa-Jerusalem railway but over the course of five years it has been transformed. The old railway station and adjacent factory building were restored and converted into stores and restaurants while the surrounding area and “platforms” became an open plaza. To remind visitors of the station’s past there is an old railway carriage standing at the entrance to the complex. The ultra-modern complex has a bohemian feel and is very chic and up market. 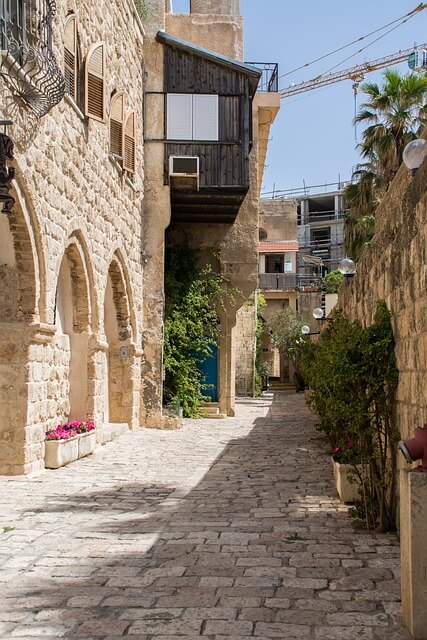 Today the complex includes the former factory, the Wieland family home, the railway station building, the Red House (1902), the factory store, and goods terminal. All of these structures are now restored and have become highlights of the complex. Cafes with outdoor seating as well as restaurants and boutiques occupy the historic buildings.
The Railway Carriage Experience is the latest attraction at HaTachana, a multimedia experience taking you through the history of the station all created within a railway carriage. The attraction uses special effects, holograms, and 3D videos to bring history to life.
Wooden pathways have been created between the former railway lines which can still be seen. Street performers are a permanent feature of HaTachana and it is a venue for many events throughout the year including concerts, live performances, exhibitions, pop-up markets and festivals. Friday is particularly buzzing at HaTachana as there is an organic market and activities
for families and kids.
Among the special stores which have set up shop at HaTachana there is AHAVA which sells Dead Sea products; SOHO, a 100% design shop; Made in Israel, a store selling Israeli pottery and Gaya which sells games and puzzles. The list of boutiques and fashion stores includes designer stores like Ronen Chen as well as more familiar brand names like SKETCH. Take a look at the unique jewelry of Michal Negrin. Other stores include Podium, tal beck, Nudie Jeans, Dorit Sade, ALF-ALEF, and American Vintage.

When: HaTachana stores stay open 10 am to 10 pm Sunday to Thursday and Saturdays. On Fridays, they open 10 am to 5 pm but restaurants and cafes stay open until midnight.
Where: 1 Koifmann Street, Tel Aviv at the southern end of Neve Tzedek.
Admission: Entrance to HaTachana is free. Railway Carriage Experience 14ILS for children under 14 years old and 20ILS for adults over 14 years old.