As you drive down towards the Dead Sea you will pass a modest sign indicating that you are about to pass Ein Gedi (Ein=spring and Gedi=baby goat). Don’t miss the opportunity to see this magical oasis where water flows abundantly among lush vegetation, right in the middle of the desert just a few minutes from the Dead Sea. The Ein Gedi Nature Reserve and National Park has made the site’s waterfalls, rock formations and vegetation accessible to the public by creating a deck walkway through the attractive landscape and sign posted hike trails. The park covers 140000 dunam and includes Nahal David and Nahal Arugot two natural spring-fed streams which flow all year-round as well as Shulamit Spring and Ein Gedi Spring. The abundant water in such a dry environment is used for bottled water and for local agriculture. Alongside the nature reserve is Kibbutz Ein Gedi. 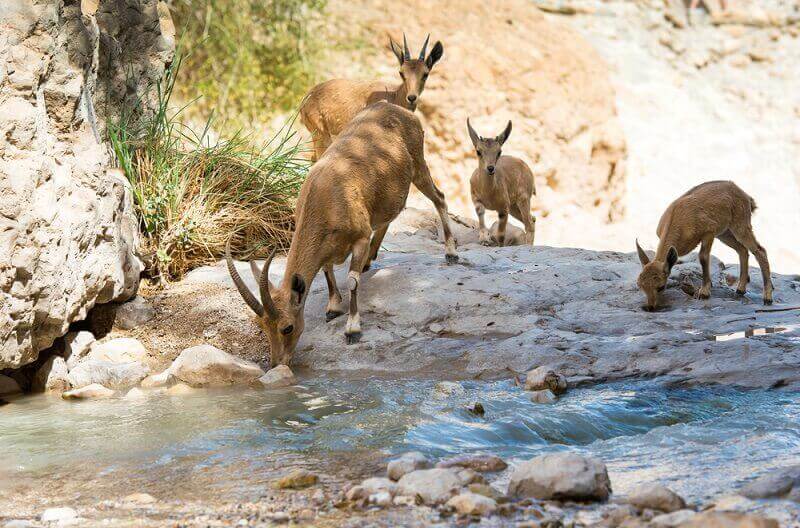 This special place has a rich history which goes back to Biblical times. Ein Gedi is mentioned in Chronicles II 20:2 (called Hazazon Tamar in the Bible) as the place where the Ammonites and Moabites met before fighting King Josaphat. It is also mentioned in Genesis as an Amorite city; in Joshua as a city of the Judah Tribe; in Ezekiel as a fishing village and in Samuel I as the place where King David hid from King Saul.  In Song of Songs the desert paradise is also mentioned. During the ancient times Ein Gedi was a source of balsam (a valuable sap extracted from a local tree and used as perfume and for healing in ancient times) which was exported throughout the Greco-Roman empire. The Roman historian Josephus Flavius also mentions Ein Gedi as one of the villages raided by the Jewish Sicarii inhabitants of Masada.
Starting from the seventh century BC there was a Jewish village here for 1200 years. In the 3rd century they built a synagogue and the mosaic floor has survived until today. The mosaic features images of the ancient irrigation system, palm trees and plants.

Flora and Fauna of Ein Gedi

The nature reserve is home to many types of plants including the Sodom apple tree, acacia, poplar tree and jujube. While here you are likely to see Nubian ibex, nimble creatures resembling goats which can climb along narrow cliff ridges. There is also the rock hyrax which is similar to a large guinea pig. These little creatures follow visitors as they walk along the walkway and wait for tidbits to eat.

A short walk from the nature reserve oasis is Kibbutz Ein Gedi, established in 1956. The kibbutz is home to a beautiful botanical garden and the Ein Gedi Eco Park (a zoo and environmental education center). The kibbutz also provides accommodation to tourists with stunning views across the Dead Sea. 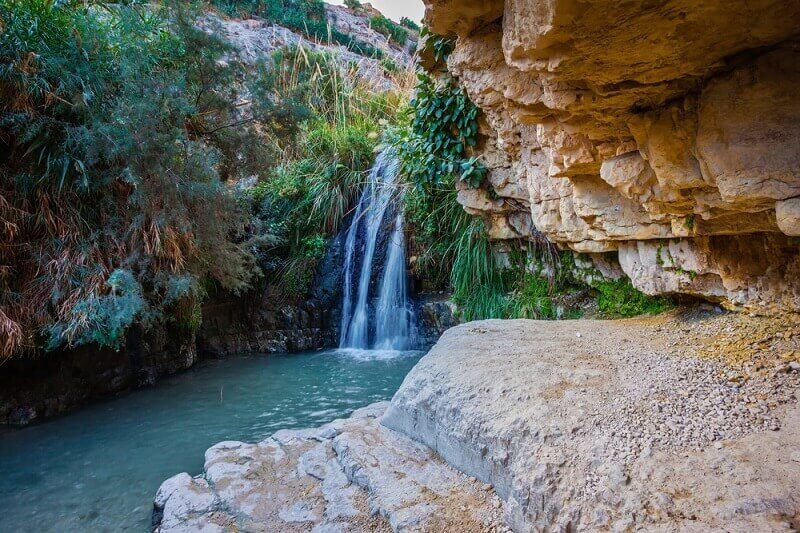 The national park has three main hike trails as well as several minor trails. The easiest route is the Lower David Stream Trail and leads to the David Waterfall and a natural pool where you can take a dip (about 1.5hrs). The Upper David Trail is for more experienced hikers and goes up to the Ein Gedi Spring and David Waterfall. The two main hike routes for visitors to the reserve are the David Stream and Arugot Stream routes. These are easy circular hiking routes of about 4km with many places to stop and bathe.

When, Where and How

Reach Ein Gedi on the Dead Sea road #90 between the desert and the western shore of the Dead Sea. An average visit lasts from 1.5 hours to a full day and the best seasons to visit are in spring, winter or fall. In the summer the temperatures can be scorching. The reserve is open April to September 8am-5pm and October to March 8am-4pm. The entrance fee is 29ILS for adults and 15ILS for children. If you just want to see the ancient synagogue the entrance fee is 15ILS for adults and 7ILS for children. Nearby attractions include the Dead Sea, Masada and Qumran.  You can shop at the nearby factory shop for Dead Sea products and you can stay overnight at one of the luxury hotels at Ein Bokek or at the Ein Gedi Kibbutz Guesthouse, the field school or camp by the Dead Sea.

Liked this article? Join our one day tour to Masada and Ein Gedi Reserve