For a truly unforgettable experience in Israel take a break from the popular tourist attractions in Jerusalem and Tel Aviv and head north to discover some remarkable natural wonders. In the extreme northwestern corner of the country not far from the Israeli/Lebanese border along the coast is a place called Rosh Hanikra (“Head of the Grottoes”). Rosh Hanikra is about 10km north of Nahariya. 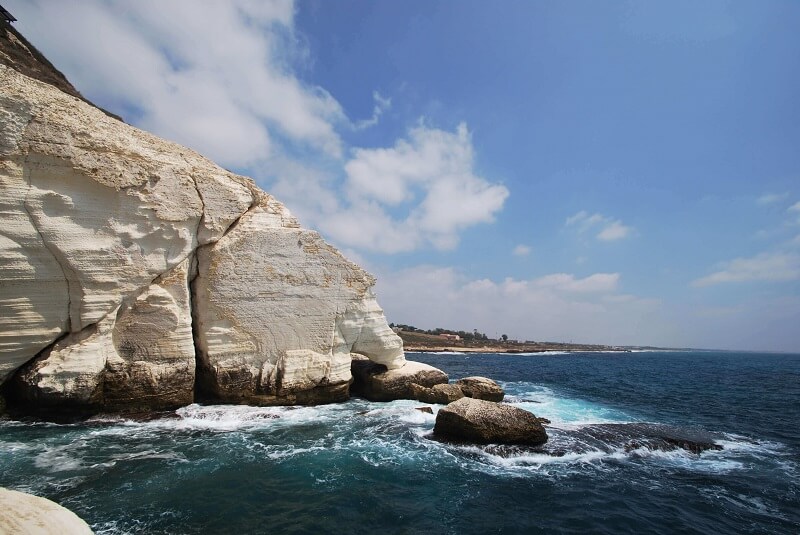 Rosh Hanikra is a natural geological rock formation of grottoes and caves in 36.5 meter high white chalk cliffs on the edge of the Mediterranean. For thousands of years the sea has been crashing against the white cliffs and over time the chalk has eroded from the force of the beating waves to form a labyrinth of grottoes and caves. The tunnels have a total length of 200 meters. The caves branch off in several directions, connecting and interconnecting at various points. The reflection of the blue sea against the white cliffs within the grottoes makes the sea look a stunning turquoise and the cave walls pristine white. The entire area has plenty to offer nature lovers with several national parks and beaches.

Rosh Hanikra has been a useful site for traders for hundreds of years. Ancient armies and merchant caravans would have passed by the caves between Syria, Lebanon and Israel to Egypt, the Arabian Peninsula and Africa. At one point it is believed that pirates used the caves to hide their loot. In World War II allied forces blasted railway tunnels through the chalk rocks in an attempt to create a train route connecting Cairo to Istanbul. The railway was a strategic element in the defense of the British Mandate which felt threatened by the pro-German Vichy French forces in Lebanon from 1940-41. The rail route never reached fruition. In 1948 the Jewish Palmach force destroyed the Rosh Hanikra bridge to prevent weapons being transported from Lebanon reaching Arab forces who were fighting the UN Partition Plan. Repairs were later thought to be too expensive and the tunnels became obsolete and were sealed off. Not far from the caves themselves is the place where an armistice agreement was signed between the Israeli and Lebanese in 1949. The border between Lebanon is called the Blue Line and there is still a border crossing between the two countries near Rosh Hanikra which is only used by UN forces. 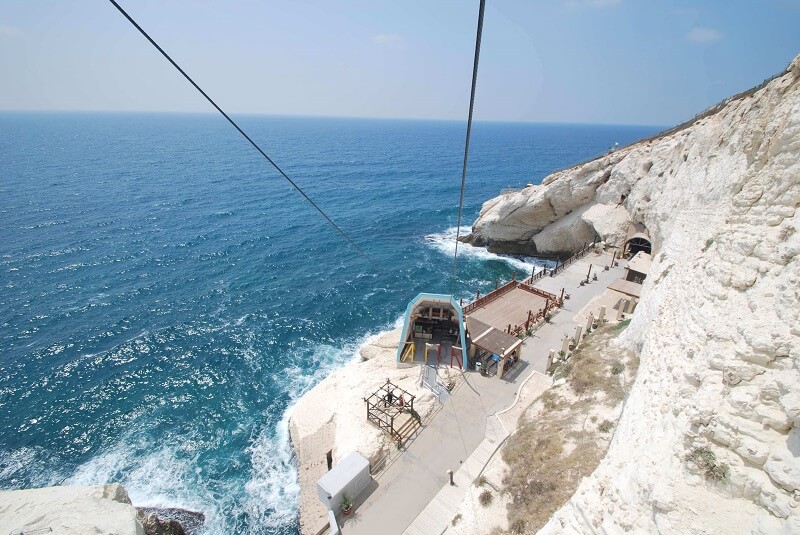 For many years the only way to access the caves was from the water and divers could visit the caves. Today tourists can access the caves and tunnels easily via a cable car which takes you down into the caves where there is a clearly marked route. The cable car is said to be the world’s steepest cable car and it has a gradient of 60°. The route takes you passed caves which are open to the sea and you can feel the spray of the water. There are caves with hundreds of stalagmites and glowing pools of water. Visitors can walk the 200 meter route through the caves.
There is an audio presentation about the caves which is screened in the old British Mandate railway tunnel.  There is a promenade – the Berton Promenade, which runs from Achziv (where there is a gorgeous beach) to Rosh Hanikra. This route offers amazing scenery with the sea on one side and the natural vegetation on the other. The 3.5km promenade offers great views of the sunset and along the way you are likely to see wild flowers and small creatures. In July and August you could see the sea turtles laying their eggs on the beach. On Saturdays a mini-train takes visitors along the promenade from Achziv to Rosh Hanikra and back. There is a commentary on the train which does not operate in winter and takes about 40 minutes to complete the journey. It is also possible to rent bicycles in the Rosh Hanikra National Park and ride along the promenade. It is also possible to rent golf carts to explore the promenade.

Where: Rosh Hanikra is at the northern end of highway route #4; 10 minute drive north of Nahariya.
Open Hours: the caves and cable car of Rosh Hanikra are open Sunday to Thursday and Saturday 9am-6pm as well as Friday 9am to 4pm. In very bad weather the caves are closed.
Prices: Adults 45ILS; children (3yrs-18yrs), seniors, handicapped visitors and soldiers 36ILS. Combination ticket for Rosh Hanikra+golf cart/bicycle 72ILS.

Liked this article? If you do, feel free to Join our One day Caesarea, Haifa, Acre, Rosh Hanikra tour