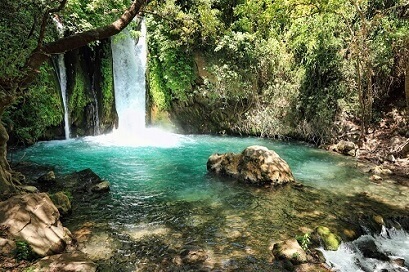 The lush green surroundings of the Banias River forever put to rest the mistaken notion that Israel is a desert! In this popular northern nature reserve, the snow and rain soaked up by 2,800-meter-high Mount Hermon emerge as the chilling headwaters of the Jordan River. Mint, bramble and willow grace its banks, shaded by majestic oriental plane trees. Furry coneys sun themselves on the rocks, warblers chirp in the thickets and kestrels tend their nests in the cliffs.

The ancient niches and inscriptions in those cliffs inspired archaeological excavations that revealed massive temples and walls. While touring the ruins, visitors learn how the ancient Greeks identified this site, with its shaded pools, cascades and rivulets, as the home of nature-loving Pan. They built a shrine to this mischievous demi-god, naming it Paneas, which in the Arabic pronunciation became Banias. 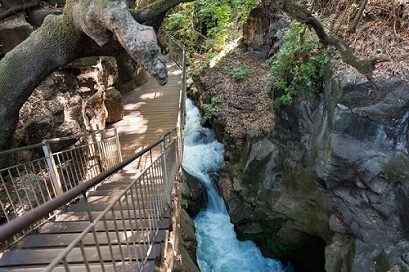 Touring routes at Banias range from about 45 minutes to two hours, taking in both its magnificent remnants of the past and its natural wonders.
In Roman times Herod the Great built a temple near the spring, and his son Philip embellished what by then had become a city, naming it Caesarea Philippi. That is the New Testament name for Banias, where Jesus charged Peter with founding the Church (Matt. 16:13–20). High above the spring, the Druze faith maintains a holy place to Elijah the Prophet. In medieval times the Muslim city that stood here was also home to Jews and Karaites and was eventually fortified by the Crusaders.