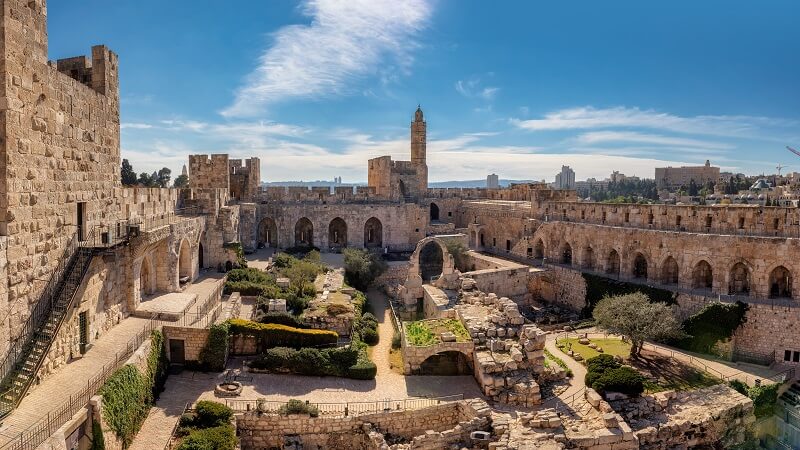 The Tower of David

The Tower of David site consists of a medieval fortress which has been altered several times over the years. Although it is called “David’s” Tower it actually has no connection to King David. Roman historian Josephus Flavius mistakenly attributed the tower to Kind David when in fact it was originally the Tower of Phasael and dates back to the time of Herod. When Westerners arrived in the Holy Land seeking Biblical sites they too interpreted the site as David’s palace.

History of the Citadel

According to archaeological findings and references in the Bible Hezekiah King of Judea expanded the fortifications of Jerusalem to include the hill to the west of Temple Mount in the late 8th century BC. In the 2nd century BC fortifications were expanded further and in the 1st century AD Herod added three towers to the fortifications of the northwestern corner of the western hill where the Citadel now stands.
Herod’s towers were intended to protect the city and his palace on Mt. Zion. Herod called the towers Mariamne in honor of his second wife who had been executed and buried near the towers; Hippicus in honor of one of his friends and the tallest of the tower, Phasael, in memory of his deceased brother. Of the three towers only the base of the Phasael Tower survived.
After the destruction of Jerusalem in 70AD the Romans used the Citadel to house troops and in the 4th century, Christian monks inhabited the Citadel. It was during the Byzantine era that the Citadel was erroneously associated with David’s Palace which is mentioned in Samuel II. The Citadel was known as the Tower of David from that point on.
The Mamluks built a citadel in 1310 on the remains of Herod’s earlier fortifications. The Ottomans expanded the citadel in the 16th century and it served as their garrison for 400 years. They added a mosque to the site and built a minaret in 1635-1655 on the remains of Herod’s Phasael Tower. This minaret (and the entire fortress complex) has become a symbol of the city.
Under the British Mandate (1917-1948) the citadel was used as a cultural center and under Jordanian rule from 1948 to 1967 the citadel once again took on a military role. Following the Six Day War in 1948 the citadel returned to Israel jurisdiction. The Tower of David Museum was opened in 1989.

The Museum of the History of Jerusalem traces the major historical events that have taken place in Jerusalem over the 4,000 years from the second millennium BC to 1948 when the State of Israel was established. To appeal to all visitors the museum uses advanced digital technology, holograms and activities. Visitors can walk along the citadel walls and in the courtyard where archaeological findings are on display. From the top of the tower there are breathtaking panoramic views of the Old City, Mt. Scopus and the Mount of Olives. The museum hosts regular temporary exhibitions of contemporary art and culture as well as special events, performances and educational activities. In the evening there is a sound and light show entitled The Night Spectacular where Jerusalem’s story is told through projected images on the ancient stones, sound, music and lights.