Armenian Chapel of the Kings

The Armenian Chapel of the Kings is situated within the Church of the Nativity in Bethlehem. The church encompasses the Holy Grotto where Jesus is believed to have been born. The church is a UNESCO-listed site. According to an agreement known as the “Status Quo” the Church of the Nativity is shared by the Greek Orthodox, Armenian and Roman Catholic churches. Each of the custodian denominations cares for a specific area of the structure and they all holds services in the church. The Armenians have their own chapel in the church - Chapel of the Kings. 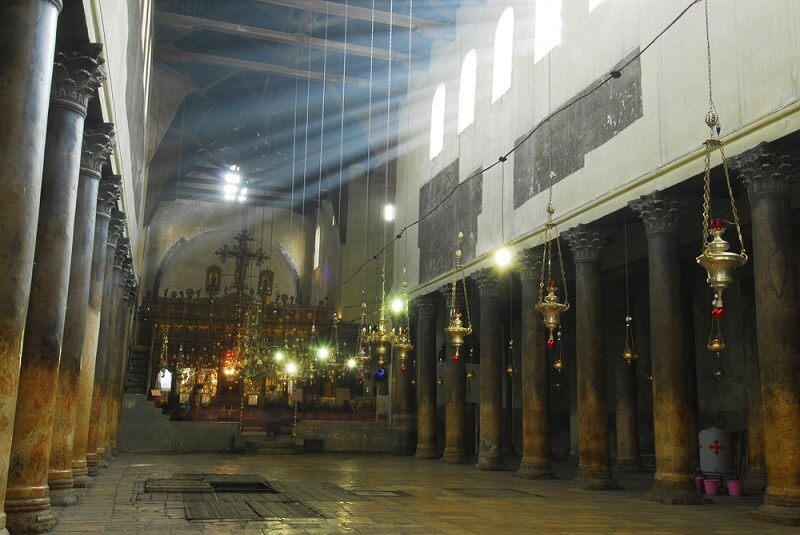 The Armenian Chapel of the Kings is dedicated to the Three Wise Men. In Matthew 2:1-12 we read of wise men that came from the East in search of the new born king. When they arrived and found Mary and her new born child they knelt down and paid homage presenting gifts of frankincense, myrrh and gold. Although the Bible does not tell us there were three men or even whether they were kings over the years the story has been embellished and the Three Wise Men are now a part of the traditional nativity story.
Armenian Christian tradition believes the wise men to have been Persian Zoroastrian priests belonging to the “Magi” sect of Persian priests. These priests were considered extremely wise and even thought to possess magic powers. The word “Magi” from the Greek word magoi is also where we get the word magic from. In 614AD the Persians sacked the churches of Palestine but spared the Church of the Nativity ostensible because they saw a wall mosaic of the Three Wise Men (the Magi) dressed in Persian clothing.

Armenian Christians come from a nation in the mountainous Caucasus region. In 301AD Armenia became the first nation to adopt Christianity as its official religion. Many Armenian pilgrims made their way to Jerusalem to visit Biblical sites and settled in Jerusalem. To this day the Old City of Jerusalem is home to a community of Armenian Christians who live in the Armenian Quarter. The Armenians share custodianship of several religious sites including the Church of Nativity.
The Armenian Christians traditionally have a link with the Magi which explains the choice to have a chapel dedicate to them in one of the most important churches in the world. Armenian legend holds that the three Magi, Melkon of Persia, Gaspar of India and Baghdasar of Arabia passed through Armenia on route to Judea when they heard of the birth of Christ. They had with them 12,000 horsemen but decided to leave their army with the Armenian King Abgar and continue on to Palestine with 1,000 horsemen and 12 princes. The legend tells of the Magi returning to Armenia after the birth of Christ and then continuing on their journey.

The Armenian Chapel of the Kings

The Chapel of the Kings is in the church’s northern transept on the spot where the Three Wise Men arrived to witness the nativity on the first Christmas Eve. The Armenian Chapel occupies a narrow room open to the nave of the church. The two side walls are lined with dark wood cabinets and paintings of Biblical scenes. The Altar of the Kings stands at the far end of the chapel. Gold and blue colored spiraling columns rise up from the altar table supporting a solid canopy adorned with gold and blue patterns. In the Armenian Chapel you can see part of the remains of the original octagonal structure built in 326AD to encase the Holy Grotto.
In the Church of the Nativity Christmas is celebrated on 25th December for the Roman Catholics; 13 days later the Greek Orthodox celebrate and an additional 12 days later the Armenians have their Christmas celebrations. The Armenians celebrate the arrival of the wise men on the 6th of January.